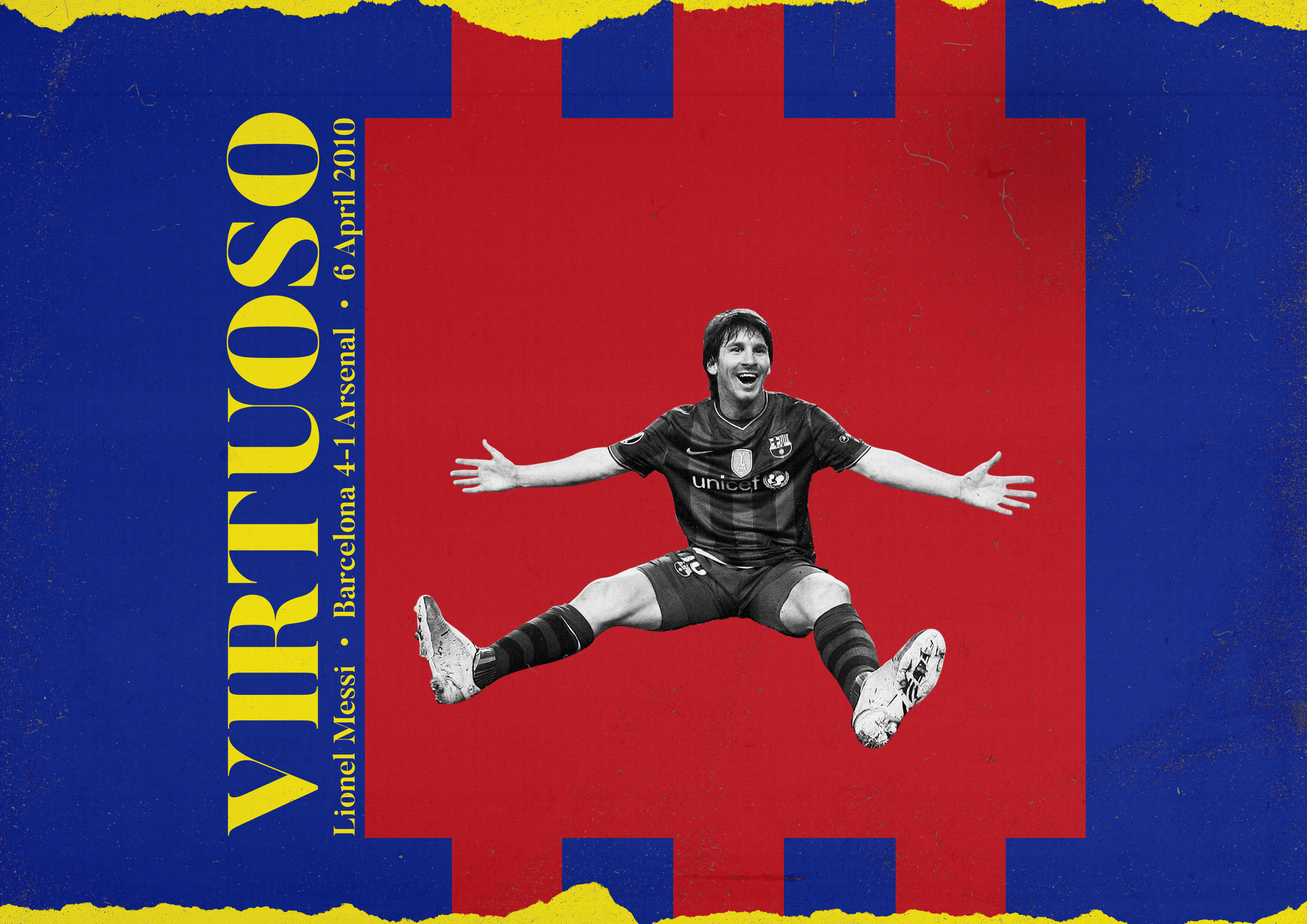 There aren’t too many occasions in football when one can lay claim to having watched a performance of such breathtaking quality as to be left utterly dumbfounded. One of Lionel Messi’s finest individual nights in the Champions League, in perhaps his entire career, will always remain a competition highlight, however.

Yes, he’s scored more important goals in UEFA’s flagship club tournament and, yes, he’s scored more in a single encounter than the four against Arsenal on 6 April 2010. But the way he grabbed that particular quarter-final by the scruff of the neck will live long in the memory.

The Catalans welcomed the Gunners to the Camp Nou after drawing 2-2 at the Emirates Stadium, and Arsenal clearly hadn’t read the script on that balmy Tuesday. They even had the temerity to take the lead through Nicklas Bendtner on 19 minutes. It would be the only time that the north Londoners led over the two legs and the advantage lasted barely two minutes, Barça quickly re-seizing the initiative after dominating the early exchanges.

Pedro worked the ball inside to Messi from the right, though his attempted pass into Xavi could only find Mikaël Silvestre. With the Arsenal centre-back unable to control it, the ball fell kindly to the Argentine and from right inside the D, his left-footed exocet carried more than a hint of venom as it exploded past Manuel Almunia and into the top corner. The roar which greeted the goal was almost primal, Camp Nou’s near 100,000 supporters rising as one to acclaim the best player in the world at that very moment. “Messi, Messi, Messi” rang out from the Blaugrana’s very own chorus line. 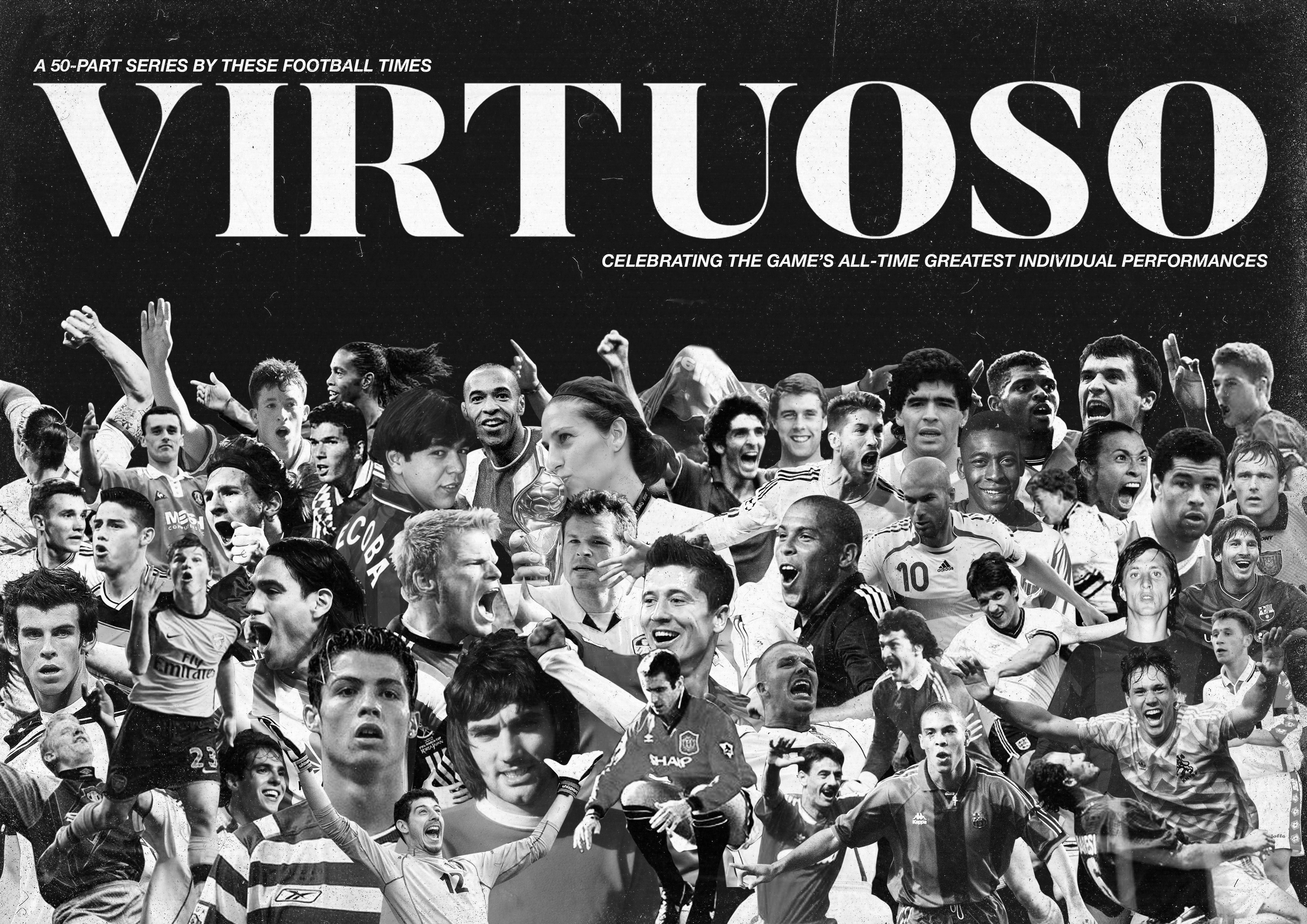 Pedro was again involved in the build-up for the second, with the visitors simply too laboured in their defensive work. Messi was halfway between the Arsenal area and the half-way line when playing a pass into Éric Abidal, who’d made an unseen sojourn from the left-back position. His low cross was turned away with Pedro quickest to react to the loose ball, and it was here were the Argentine’s speed of thought and actual acceleration came to the fore.

An unchecked run had taken him to the penalty spot where his momentum took him past Silvestre and, as Almunia came rushing out, a right-footed shot flew past him to send the Blaugrana into the lead on the night and in the tie. With only eight minutes until the break, Arsenal just needed to get back into the dressing room without any further damage inflicted. But worse was to follow for them, and it was the crowning glory for La Pulga.

Thomas Vermaelen had wildly misjudged a clearing header in the centre-circle, allowing Seydou Keita to nod the ball into Messi’s path. Arsenal had played an absurdly high line, and it left the number 10 through on goal, despite being closer to his own half that the opposition box. The finish, when it arrived seconds later, was audacious, brilliant and utterly mesmerising.

As Messi raced away from the defence, Almunia stood bolt upright and level with the penalty spot, completely narrowing the angle. It looked impossible to score and was really going to require something extra special to beat the ‘keeper. The delicate chip that the Argentinian placed over the Spaniard’s head drew gasps from the stands, so exquisite was the execution. Applause seemed to continue for an age as Messi was surrounded by teammates who were equally as dumbfounded. At the opposite end of the pitch, Victor Valdés and Gabriel Milito were in rapture.

It had taken Messi just 21 minutes from his first goal to render the Premier League’s third-placed team moribund, and it would leave Arsène Wenger rueing his presence during a half-time television interview. The Frenchman had grudgingly acknowledged that his team were being taken apart by the best player on the planet, but he still expected his players to be brave in the next 45. That it took until two minutes from the end for Barcelona to score another was more to do with their reticence to attack after Arsenal had dented their hopes the previous week with two late goals.

Furthermore, an El Clásico immediately followed this match so it was imperative that Pep Guardiola’s side saw out the game with relative calm. Arsenal were offered the occasional incentive to break forward but, perhaps acknowledging that the game was already beyond them, their genuine chances to get back into the tie were few and far between. Tomáš Rosický fired over when well placed to do better and when Bendtner looked to pull the trigger again, he was expertly denied by Milito.

This night was all about Messi, though. A quieter second-half was still peppered by the occasional burst and you could sense the urgency with which Arsenal’s players wanted to get within touching distance whenever the maestro was on the ball. There was genuine panic whenever the Blaugrana were in or around the Gunners’ area but, to their credit, they were to keep the hosts out again until the bitter end.

With the clock winding down, Messi was found by Xavi and managed to weave his way past Vermaelen and Emmanuel Eboué. Almunia’s save from the Argentinian saw the ball rebound back to him and, to the surprise of nobody, he didn’t need asking twice. A nutmeg to round off the evening was in-keeping with what had gone before.

Barcelona would eventually fall to pantomime villain José Mourinho and his Inter side in the semi-finals, their chances of retaining the ‘cup with the big ears’ at the Santiago Bernabéu gone. Those four goals and as good a 90 minutes from Lionel Messi as you’re likely to witness, however, was undoubtedly the highlight of that season’s competition.