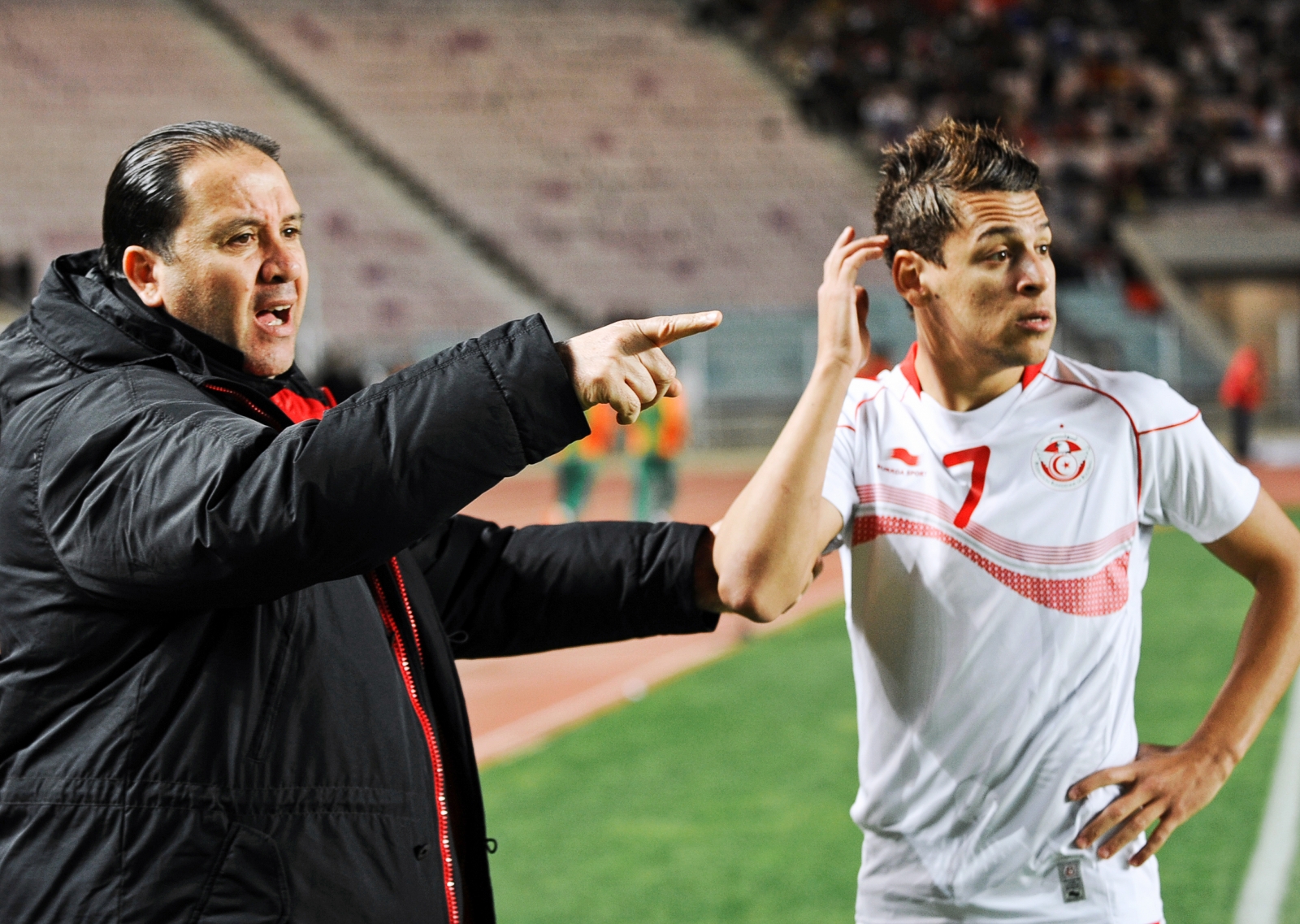 Ché Guevara stares down at you. Eyes stencilled in charcoal, hair dripping wet paint, his lips part to reveal a speech-bubble. “We come from Bab Jedid, the Kasbah and Sangherine,” the message begins, paying homage to three well-known Tunis districts. “But we don’t come from Tunisia.”

Ché’s cap lacks its customary revolutionary star. In its place is the crest of the capital’s football team, Club Africain. “There is only one love and it is Club Africain,” declares the graffiti on the wall.

Across town, to the southern district of Radès. Here, amidst stretches of washed-out arid land, the Tunisian national team plays host to Iran. The World Cup is two months away, and this is the team’s last home game before Russia. Tickets cost just a few dinars, the national stadium holds 60,000 and Tunis’ population alone is over a million. Yet as Wahbi Khazri bundles in a 71st-minute winner, 55,000 seats remain empty.

After the game, the president of the Tunisian Football Federation (FTF), Wadii Jari, seems nervous. The national team’s return to Tunis after its exile in the eastern city of Monastir suddenly seems premature. At least in Monastir’s more modest stadium, you couldn’t see the empty seats.

Tunisians do not dream anymore, the local saying goes. The country’s 2011 Jasmine Revolution, once heralded as the single shining light of the Arab Spring, has given way to political disenchantment. Political protests held on the seventh anniversary of the Revolution in January saw 803 Tunisians arrested. If dreams are the currency in which Tunisians measure their political progress, at least they have never pretended to dream for the national team.

No child goes to bed in white and red pyjamas. No cafés or taxis grind to a halt when they play. The Eagles of Carthage, as the squad is known, might take to the field in the name of Tunisia, but Tunisians have yet to accord them a role in the national imagination.

In a 2015 survey by Le Temps, the country’s largest French newspaper, only 3.9 percent of Tunisians admitted to supporting the national team. Sixty-one percent said they would rather watch a soap than an Eagles match. As the Tunisian journalist Mourad Ayara notes, “there simply is no sacred union between nation and team.” 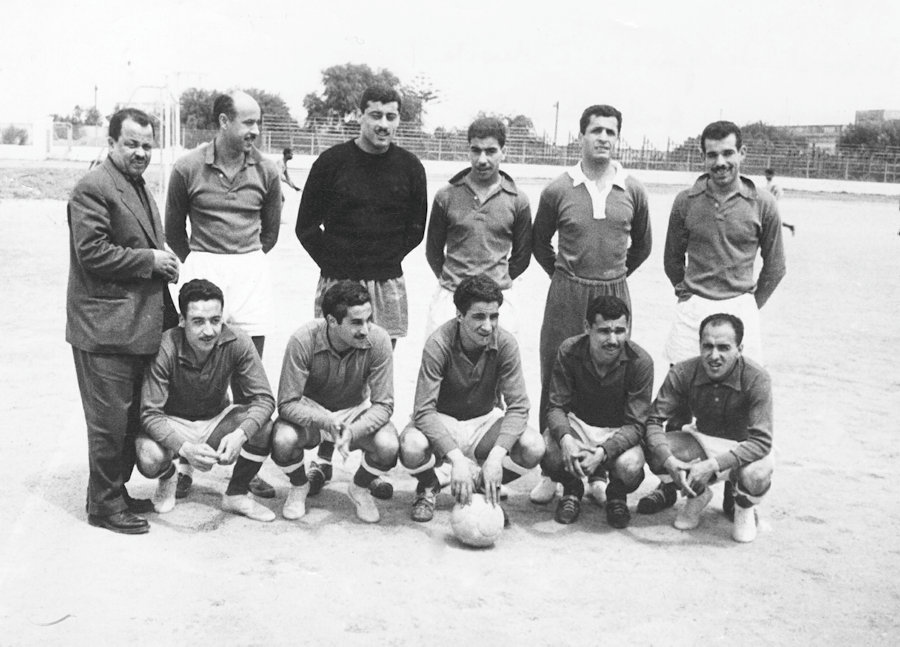 Read  |  Algeria’s Équipe FLN: the movement that used football to fight for freedom

Instead, their footballing loyalties have refracted inwards towards the domestic game. Tunisian football is reminiscent of the fractured identities of the Balkans; a shared national identity remaining elusive. Bitter club rivalries, often reflective of ethnic or regional divides, reign supreme.

You do not need the statistics of the printed press to realise this. All you need do is look around you to the art and murals that adorn the streets of Tunis. Across North Africa, the Arab Spring has seen an explosion of revolutionary street art as citizens have reclaimed public spaces. But as Nicholas Korody has shown in his comparative study of street art across the region, Tunis’ graffiti speaks in a unique register.

In Cairo, Rabat and Tripoli graffitied messages are often accompanied by references to the national football teams, to Mohamed Salah, Hakim Ziyech or Medhi Benatia. But in Tunis, the references are solely to club identities. “There is only one love and it is Club Africain.”

Tunisia’s national team is the discarded orphan of the Jasmine Revolution. The pet project of the toppled dictator Zine El Abidine Ben Ali, the Eagles served as a symbol of the regime’s corruption and nepotism. Ben Ali passed effective control of the Tunisian Football Federation to his son-in-law, Slim Chiboub.

Sponsorship and media rights to the Eagles were transferred at a pittance to the brothers of Ben Ali’s wife, Leila Trabelsi, while allegations of match-fixing and referee intimidation ran rife. In 2011, Chiboub’s successor, Ali Hafsil, resigned, admitting that for over a decade the federation had been participating in domestic match-fixing.

Suspicions soon hardened that Ben Ali was exerting control over the selection of the national team. Chiboub, now installed as chief executive of the president’s favourite football team, L’Espérance Sportive de Tunis, seemed to begin favouring his club’s players over those of rivals for the national squad.

Star players led the public outcry in the press, with goalkeeper Ali Boumnijel and defender Anis Ayari threatening to withdraw from successive squads. Violence in stadiums rose as L’Espérance benefitted from a spate of last-minute penalties on their way to eight successive league titles. In 1999, three supporters were killed by state police in Béja following protests against a bizarre decision to award L’Espérance a penalty. The millennium brought no respite. Between 2000 and 2010, the Tunisian Interior Ministry recorded an average of 729 violent incidents at stadiums per season. 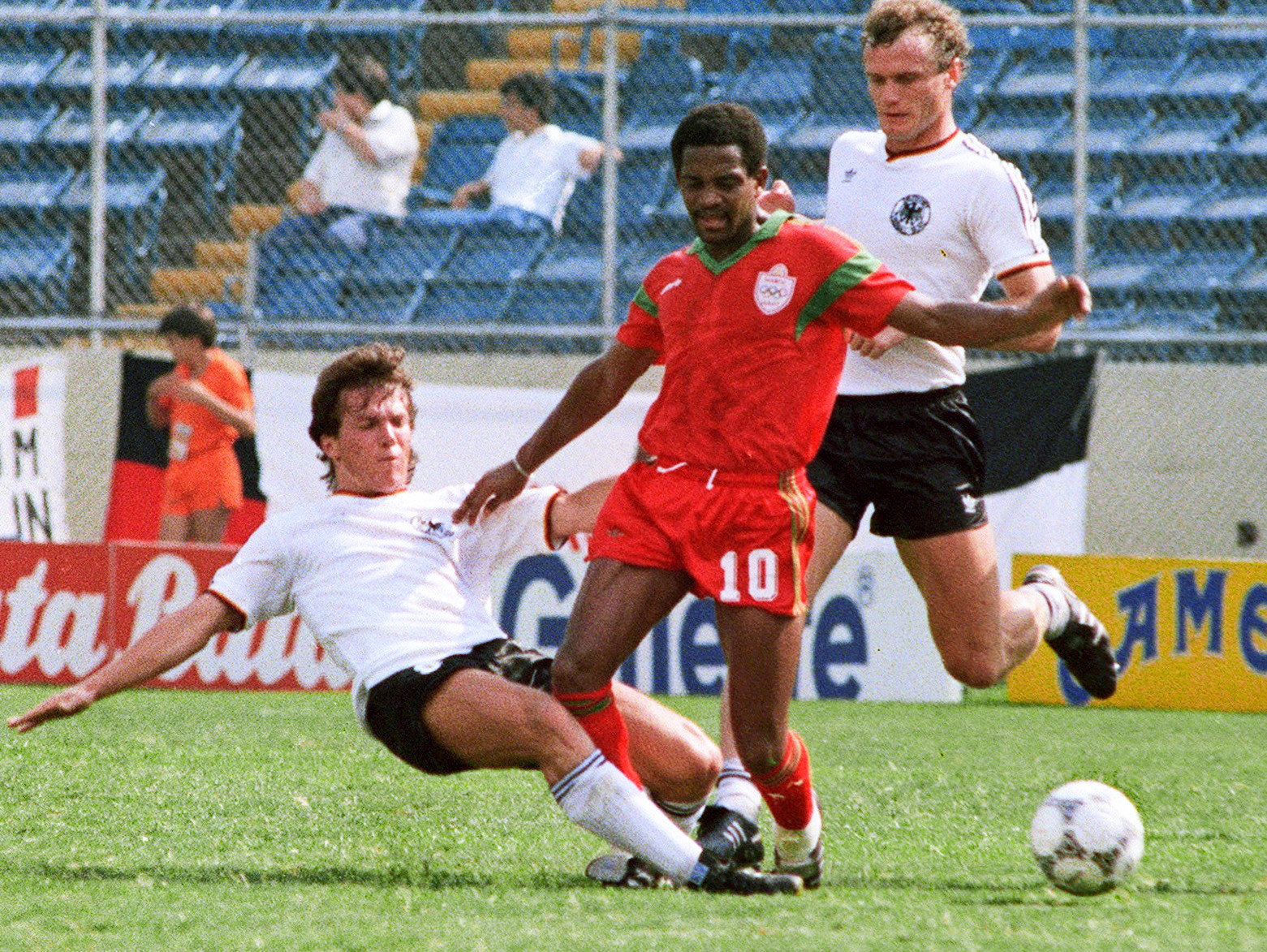 The national team, a symbol of the false unity Ben Ali seemed to represent, were the victims. In a country where to slander Ben Ali on the radio was to be imprisoned, the stadium was the only realm for freedom of expression. And Tunisians certainly exercised this freedom. In November 2010, just weeks prior to the Revolution, Tunisian fans turned up in numbers to jeer the national team from minute one in their friendly against Australia. At half-time, the team was winning 3-1, but the whistling continued.

In December 2013, the decades-long suspicions of corruption were given a material basis. Tunisia’s new president, Moncef Marzouki, published a ‘Black Book’ containing archival material seized from the Presidential Palace the day after Ben Ali had fled the country. The text listed all those who had profited from the Ben Ali regime.

Confirmation came that L’Espérance had received state backing in winning those eight successive league titles. Substance was also given to allegations made in 2009 by the president of the Federal Commission of Refereeing, Abdessalam Chammem, that referees were being paid-off to let the Tunis team win.

More damagingly for the Eagles, the book then listed the names of former national team managers and players who had been encouraged to publicly support the regime. This included former trainers Ali Selma and Mrad Mahjoub, as well as players including Skander Souyah, Hamda Ben Doulat, Kamel Chebli, Imed Mhadbi, Hedi Bayari and Sadok Sassi. Prompting a national scandal, the list included the name of the goalscorer of the winning goal in the 2004 final of the Africa Cup of Nations, Zied Jaziri.

The Black Book shone a light onto the doublespeak of the Ben Ali regime. On the one hand, was the official narrative; the state’s appeal to a unifying myth of an ancient Tunisian identity rooted in Carthage and Hannibal, of which the crude rebranding of the national team as The Eagles of Carthage in 1994 was symptomatic. On the other hand,was the reality; a new national identity that looked suspiciously like a continuation of corrupt, tribal politics and jobs for the boys with a bit of branding thrown in.

And jobs for the boys this certainly was. Ownership of the nation’s top football clubs was passed around Ben Ali’s friends as if the teams were sweets in a particularly opulent selection box. L’Espérance was passed to Slim Chiboub; Le Stade Tunisien was handed to Ben Ali’s Minister of the Interior, Habib Ammar; L’Étoile Sportive du Sahel became the property of associates of the previous President, Habib Bourguiba; and Jeunesse Sportive de Kerouan was a present to Aziz Miled, an influential businessmen close to Ben Ali. Most significantly, Ben Ali placated his largest political rivals, the hated Trabelsi family, by giving them control of Club Africain.

Political nepotism was one thing but tilting the rules in favour of the universally-hated L’Espérance was something else different. In 2001, Chiboub was given government contracts free of charge to build Carrefour stores across Tunis. In 2002, the state turned a blind eye to what the young Nigerian forward Julius Aghahowa claimed to be his kidnapping by the club, the latter allegedly confiscating his passport and forging contracts. 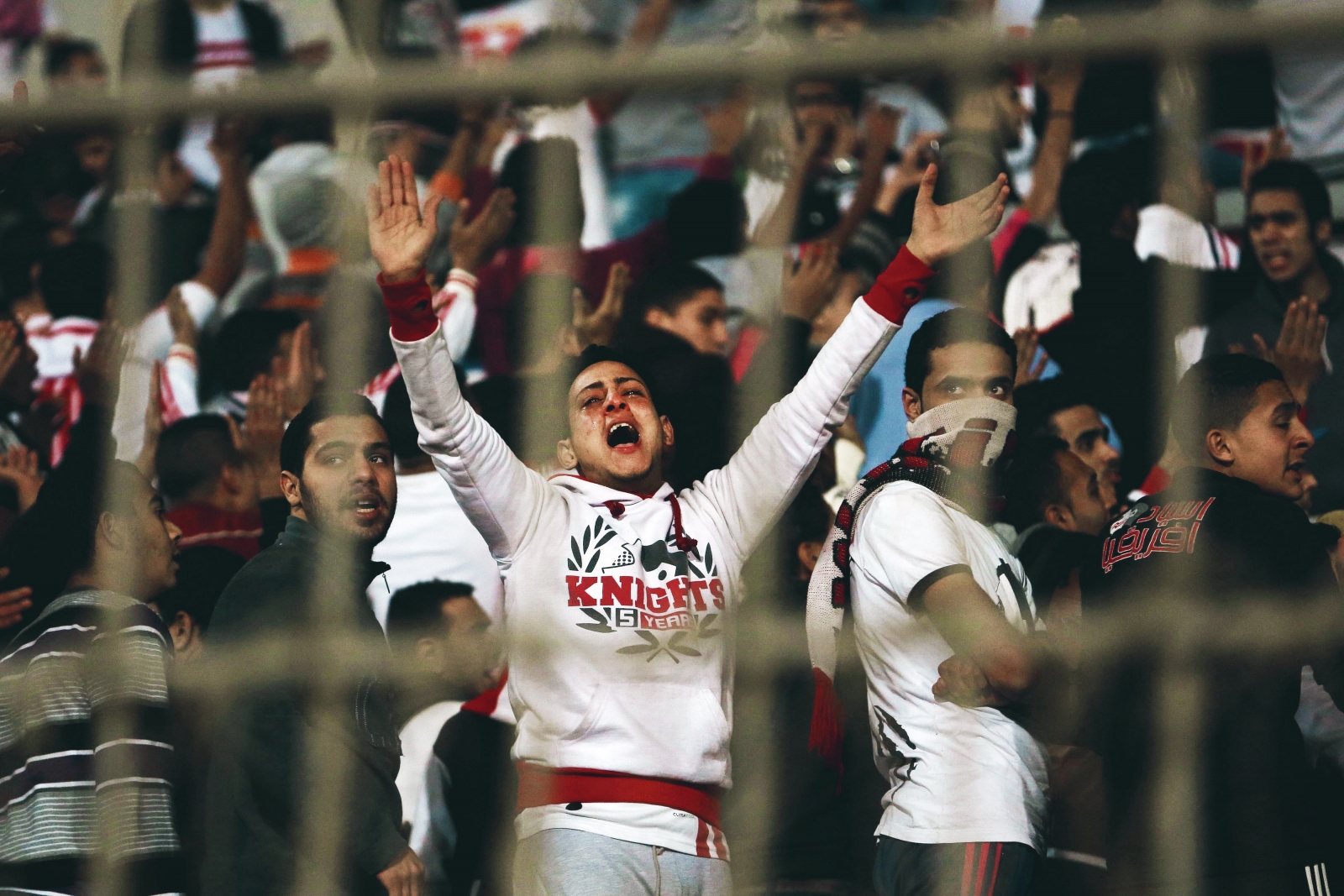 In 2004, with the club seeking to build a new stadium, Ben Ali gave L’Espérance the property rights over a previously listed national park. In 2008, the director of the Kuwait Real Estate Investment Consortium (KREIC), Mekki-Chérif, turned whistleblower in announcing that Chiboub had been diverting money from the fund for his own personal profit.

According to national newspaper reports, the proceeds from both the Carrefour transactions and the KREIC transfers were invested back into L’Espérance. In 2016, Tunisia’s attorney-general announced that Chiboub would face prosecution for the laundering of over $300m.

The victim of all this has been the Tunisian domestic game. Ben Ali’s legacy has been to normalise in Tunisia the Silvio Berlusconi model of politicians acquiring football clubs as handy political platforms. The result has been rampant mismanagement. Slim Riahi, a wealthy businessman and leader of the Free Patriotic Union (UPL) party, acquired Club Africain in 2012. Despite claiming to have injected over $60m into it, in 2017 the Tunis Court of First Instance froze his assets on suspicion of money laundering. In January 2018, Club Africain reported debts of over $30m.

Étoile du Sahel is now owned by the politician Ridha Charfeddine, who has run up debts of $15m at the club. Similarly, the parliamentarian Mohammed Kamel has taken over Kasserine, bringing them to the point of liquidation.

Meanwhile, Ben Ali’s patronage of L’Espérance has served only to stoke club rivalries further. Tunisia continues to see a Balkanisation effect whereby identities are fracturing along regional and ethnic lines. With political disillusionment running high, a young population that sees no future for itself, and stadiums that continue to offer a rare space for freedom of expression, crowd violence has reached new heights.

Eight of Tunisia’s 14 top-flight teams have been forced to play behind closed doors this season following clashes. To enter a stadium, fans must now pass seven rounds of security checks. In April, a Club Africain supporter, Omar Abidi, drowned in a river following a clash with the police.

As Tunisians mourn their lost Spring, their national team travel to Russia. They do so amidst little fanfare, confetti or euphoria. Tunisians do not dream anymore. They are not about to do so for the Eagles of Carthage.