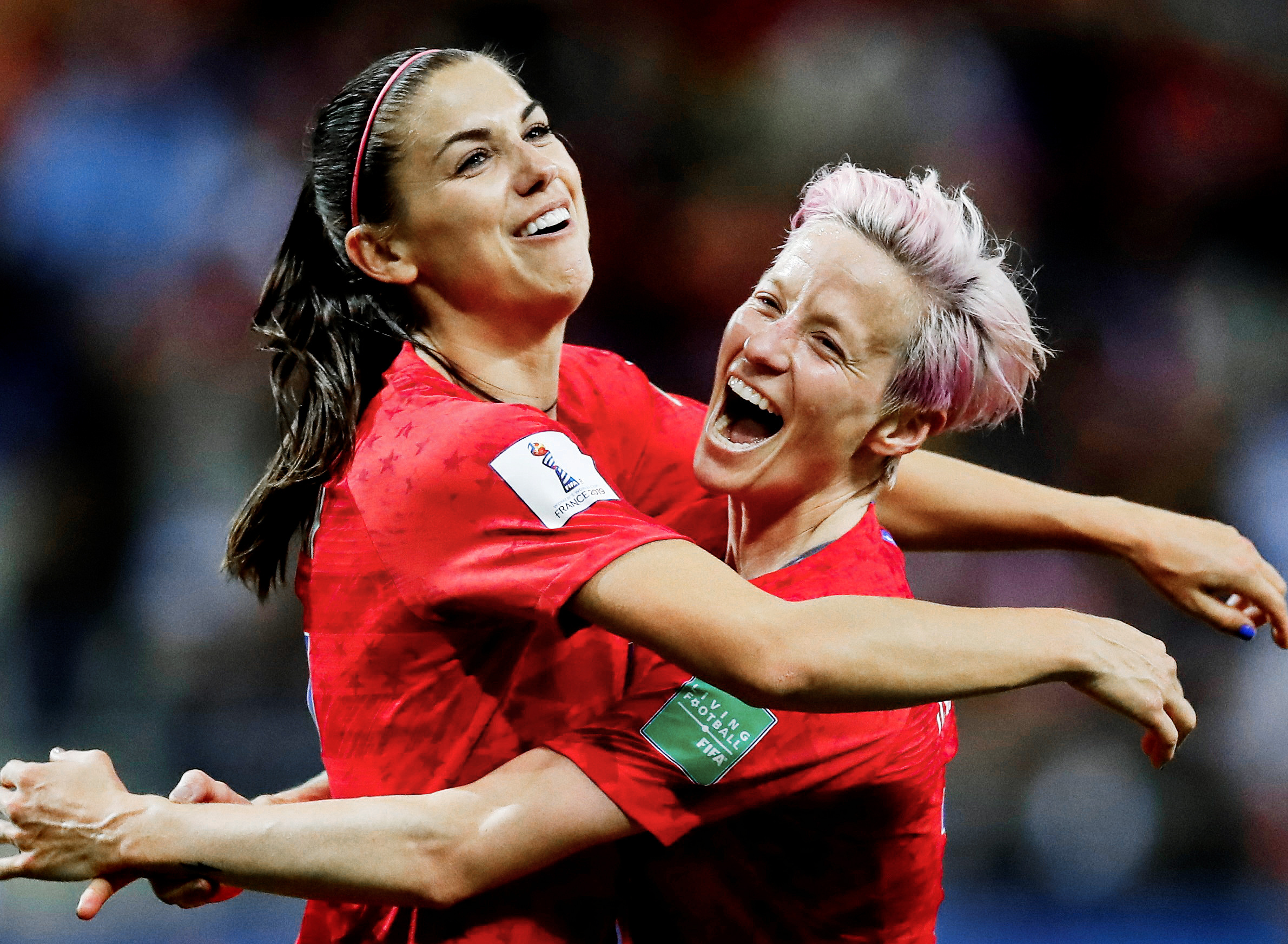 The United States is exactly where they planned to be at this Women’s World Cup. After breezing through the group stage, the Americans defeated Spain in the round of 16 and reached the quarter-finals for the eighth straight World Cup. The US, the defending champions, remain heavily favoured to again lift the trophy.

At the same time, the players coached by English-born Jill Ellis have settled in comfortably at this tournament over the past three weeks. A large contingent of American fans have packed French venues during their matches, creating an atmosphere that made it feel like they were playing at home.

Several US players have spent time with clubs in the French league, one of the most competitive and well-financed when it comes to women’s football. Indeed, Six US players at this World Cup alone – Lindsey Horan, Alex Morgan, Tobin Heath, Morgan Brian, Allie Long and Megan Rapinoe – spent time in France to varying degrees of success, giving them a familiarity with a country they hope to spend some time playing in at this World Cup. “[My teammates] following me around is probably the best way you could put that,” said Horan, an attacking midfielder who played for Paris Saint-Germain for four years. “The first day here, people were just asking me where to go around our hotel, and I had no idea. There was just one spot I knew.”

Making this Franco-American connection even tastier is that the United States and France will face off against each other in the quarter-finals on Friday at the Parc des Princes. It is a match some have been looking forward to since last year’s draw. This US team’s French connection has also enhanced their chances of winning again, giving several players both familiarity with the culture and their upcoming opponents.

On the eve of the tournament, Rapinoe hailed France as the favourites to win the World Cup. “I think they are, in my opinion, the favourites for sure,” she said. “And I don’t say that to play mind games. They are a fantastic team, they’re home, they’re going to have obviously a home crowd with them every time and we felt that in the last World Cup even though it was [played] in Canada.”

Horan has emerged as one of the US’s best players at this World Cup. Although she earned a scholarship to attend the University of North Carolina, which has produced a cadre of female football talent such as Mia Hamm and Kristine Lilly, Horan skipped school and signed with PSG in 2012. In doing so, she became the first women’s player to forgo college for a shot with a professional European club. 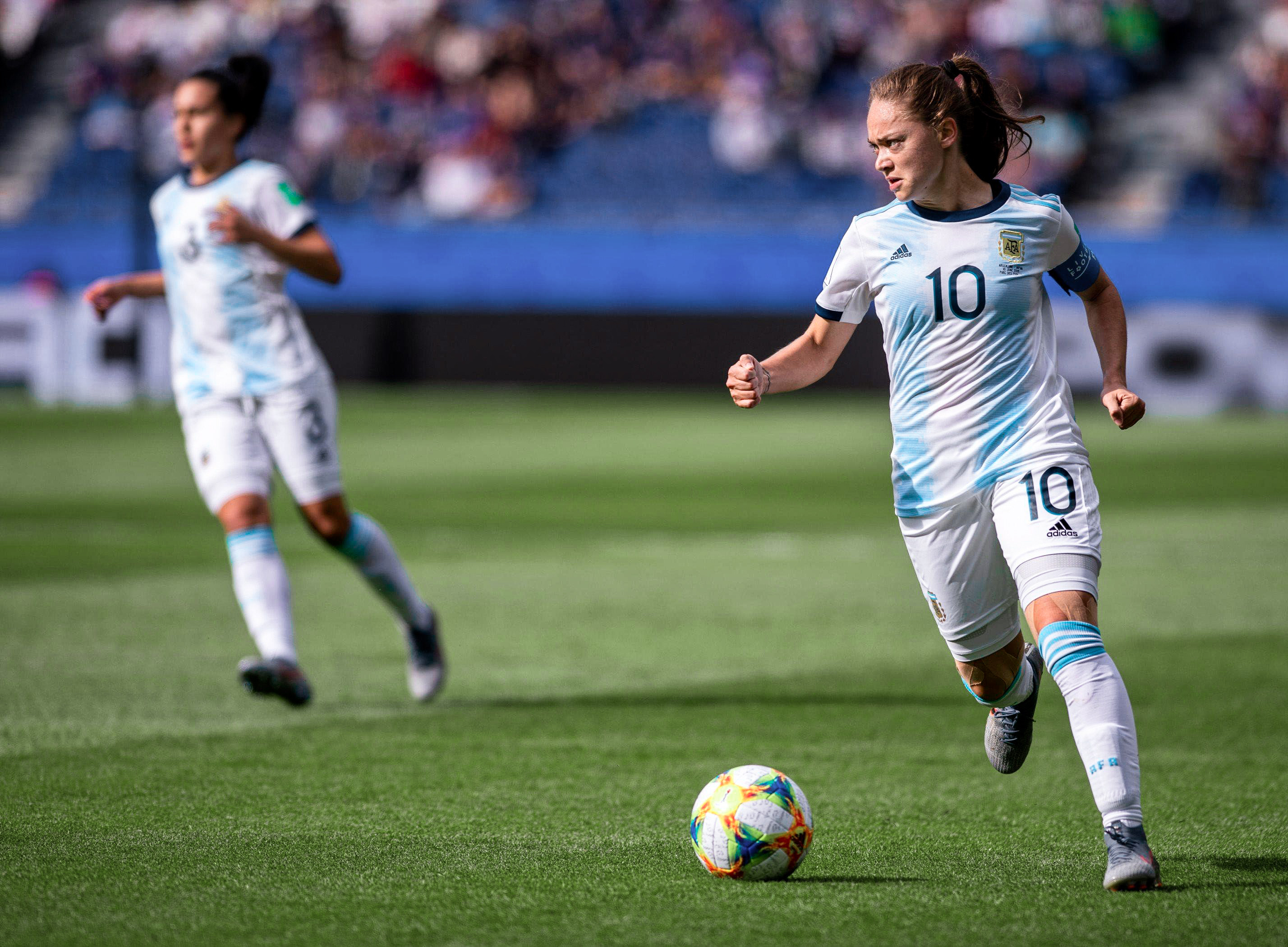 Read  |  “Incremental change is not enough”: women’s football and the battle against the authorities

Horan, who has scored two goals at this tournament, had trained with French powerhouse Lyon, but never played a game in order not to ruin her college eligibility. After signing with PSG, Horan knew that failure would mean returning to college unable to play. College athletics in the United States stipulate that all players remain amateurs. Any time spent playing in an official match or competition with a professional team would means losing that status. In addition, the US had no professional league at the time, following the collapse of Women’s Professional Soccer in 2012.

Like in the men’s game, America’s women now dream of going overseas. Christian Pulisic signed for Borussia Dortmund when he was just 16. Pulisic, one of the nation’s biggest stars, will play for Chelsea this season. In the men’s game, what Pulisic has done isn’t unique; he’s one of dozens of Americans to make it in Europe, a trend that began in the early 1990s. For the women’s game, Horan remains – for now – the first to do so.

Professional football has struggled in the United States. The notion seems a contradiction for a country that has won the World Cup three times and on four occasions captured the gold medal at the football tournament held every four years as part of the Olympics. Horan’s move marked a pendulum shift when it came to the club game. European clubs now have all the money and power. As a result, they are drawing talent from around the world, including the US.

“If you are an American player I would think you would want to play at the highest level and you have the Champions League here in Europe, so why not?” Ballon d’Or winner Ada Hegerberg said in a 2017 interview with Reuters. “You have European football growing a lot now – Barcelona, the Spanish teams, the English league, France, Germany, the game is growing in Europe and it is going to be exciting the next few years to see what happens.”

Morgan echoed that sentiment: “The Champions League is the biggest title for any club team. And we don’t have the opportunity in the U.S. to play in a tournament like that.” Rapinoe, who played for Lyon for two seasons ending in 2014, also looked back with fondness at her time in France and competing in the Champions League. “It was one of the main reasons why I went,” she added.

Rapinoe, who scored eight goals in 28 matches in all competitions for the French club, said she left the team earlier than planned because travel with the national team made it difficult for her. “I just felt like, overall for me personally and for my career, it was better for me to come back [to the United States].”

France’s top flight, known as Division 1 Féminine, dates back to 1918, but it wasn’t until 2009 that it became professional. Lyon, one of 12 top-tier clubs, quickly began offering players lucrative contracts. It is not lost on the league that having the Women’s World Cup in France can also be a boon for them in terms of marketing and signing future stars from around the world. There are 52 players in total at this Women’s World Cup that play their club football in France, second only to the United States with 74. 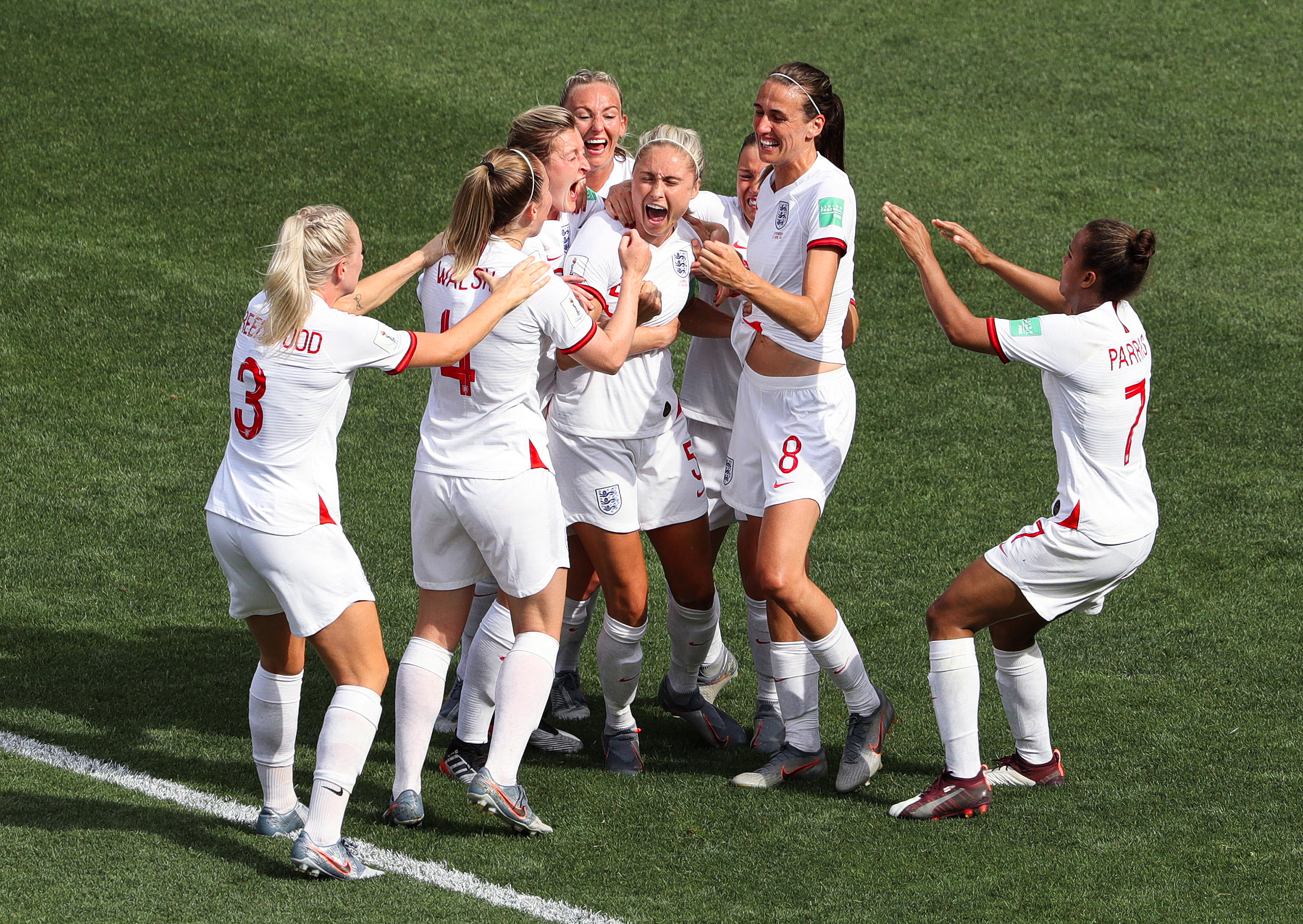 For Horan, playing in France was akin to living a dream. She was earning a six-figure salary and the club supplied her with living accommodations in Saint-Germain-en-Laye, a wealthy Parisian suburb. Horan grew up as far away from Paris as one could get. The city of Denver, known for its mountain climbing and natural beauty, isn’t a football hub. Instead, Horan learned the game by watching lots of it on television, and Lionel Messi remains her idol.

When away from the television, the football prodigy trained every day with the Colorado Rush, an amateur club. At age 15, she made the US under-17 team. Back in Colorado, she played against teenage boys, an experience that made her better and tougher. When the time came to go to college, she opted for a shot with PSG. It was a difficult decision, but one that made Horan the star player we are seeing at these finals.

During her time with PSG, Horan scored 46 goals in 58 appearances – making her the club’s fourth-highest scorer ever – and became a fan favourite in the process. It came with plenty of sacrifice and homesickness. Being so far from home cost her a national team call-up in 2015 and she missed out on the World Cup that year. She eventually thrived at PSG under no-nonsense coach Farid Benstiti and got called up to play for the US. “I was very tough with Lindsay,” Benstiti admitted in a recent interview with L’Équipe. “But I do not regret anything, both in terms of myself and for her.”

Horan currently plays in National Women’s Soccer League. Halfway through Horan’s first season in France, striker Tobin Heath also signed with the club. Her arrival signalled a new shift in the power balance. European clubs were investing more money in women’s football and they were signing up American players, among the best in the world.

Horan and Heath weren’t the only Americans to call France home. Morgan signed for Lyon in January 2017 on a six-month loan from Orlando Pride. She also said playing in France made her a better player. “The first thing I noticed was that it was not as warm as in Florida,” Morgan said. “I’m not used to wearing gloves, a hat and five layers when I go out and train.”

Although she saw limited playing time, she scored five goals in eight league appearances and helped the team to their ninth consecutive league title. The club added a Champions League and French Cup to that treble-winning year. In all, Morgan scored 12 goals in 15 games across all competitions. 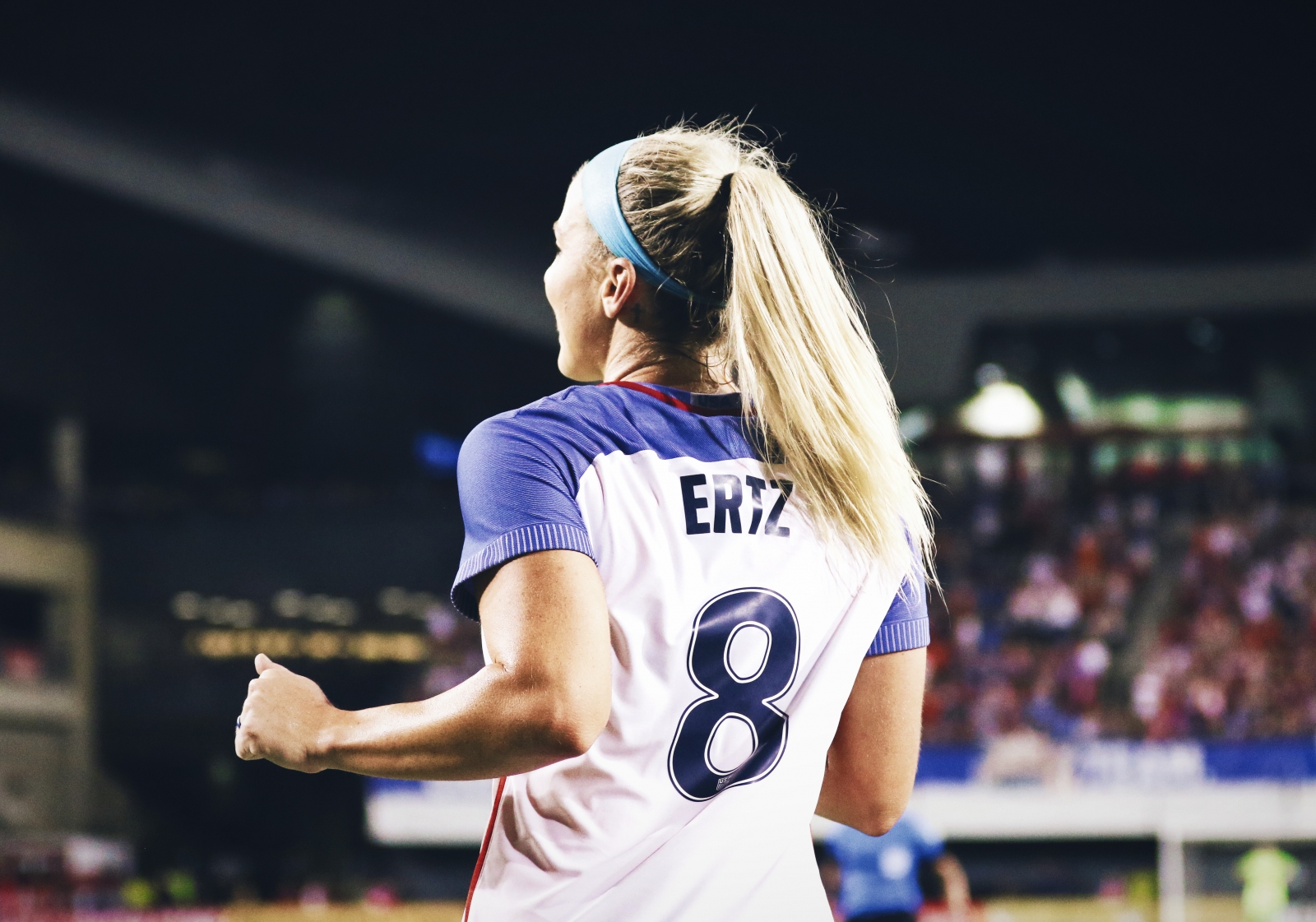 “First, we already quality attackers like Ada Hegerberg and Eugenie Le Sommer. Competition to start was strong. It was not easy for her. It was not easy for me,” recalled Gerard Precheur, who served as PSG manager at the time. “Second, she had to adapt to a different style. Despite that, Alex was able to, she was a great professional. She’s serious about football – whether in training, match preparation or recovery. That’s what really impressed me. On the field, she played very well, participating perfectly in the turnover with the other attackers.”

For Morgan, injuries impacted her playing time. She suffered from a hamstring injury for much of the spring, something that forced her to be subbed off after just 23 minutes in the Champions League final won by Lyon over PSG on penalties in the all-French final played before 23,000 at the Cardiff City Stadium.

Morgan could have played in Lyon for a second season but decided to return to Florida to be closer to her family. “She came to live this French experience, but is very attached to her family in the United States,” said Lyon midfielder Corine Franco. “She did not see herself staying longer. It was not a problem of adaptation.”

Franco said Morgan enjoyed France and immersed herself not only in the country’s football, but culture as well. “She always had a smile. We sometimes saw each other outside the field for lunch,” she said. “Megan Rapinoe was also like that. She had a desire to discover. They were in Lyon for football, but also for the human experience. She enjoyed and loved France. It was not always easy because there were a lot of quality players. In the end, we won the Champions League and had a successful season.”

That desire to discover France, but also succeed on the pitch, mirrors Horan’s experience. Despite the challenges that came with not speaking the language, Horan made the best of it. Upon her return this month to the French capital ahead of the US’s group stage match against Chile at the Parc des Princes, Horan played tour guide for her teammates, giving them directions to tourist attractions like the Eiffel Tower. “I was trying to teach Samantha Mewis and a few other girls how to use the train, and it was so funny because I went in an opposite direction. I just kind of hoped they get there,” Horan joked.

Horan said returning to France, this time with the national team, is “just the most surreal thing.” She celebrated that return with a goal in the 13-0 win against Thailand, her first-ever World Cup match. “To score a goal in front of my family and so many US fans in the World Cup was just incredible,” she added. “Being on the world stage and being at a World Cup in this city, it’s insane. I can’t really describe the feeling. I’m so honoured to be here and be back in this city.”