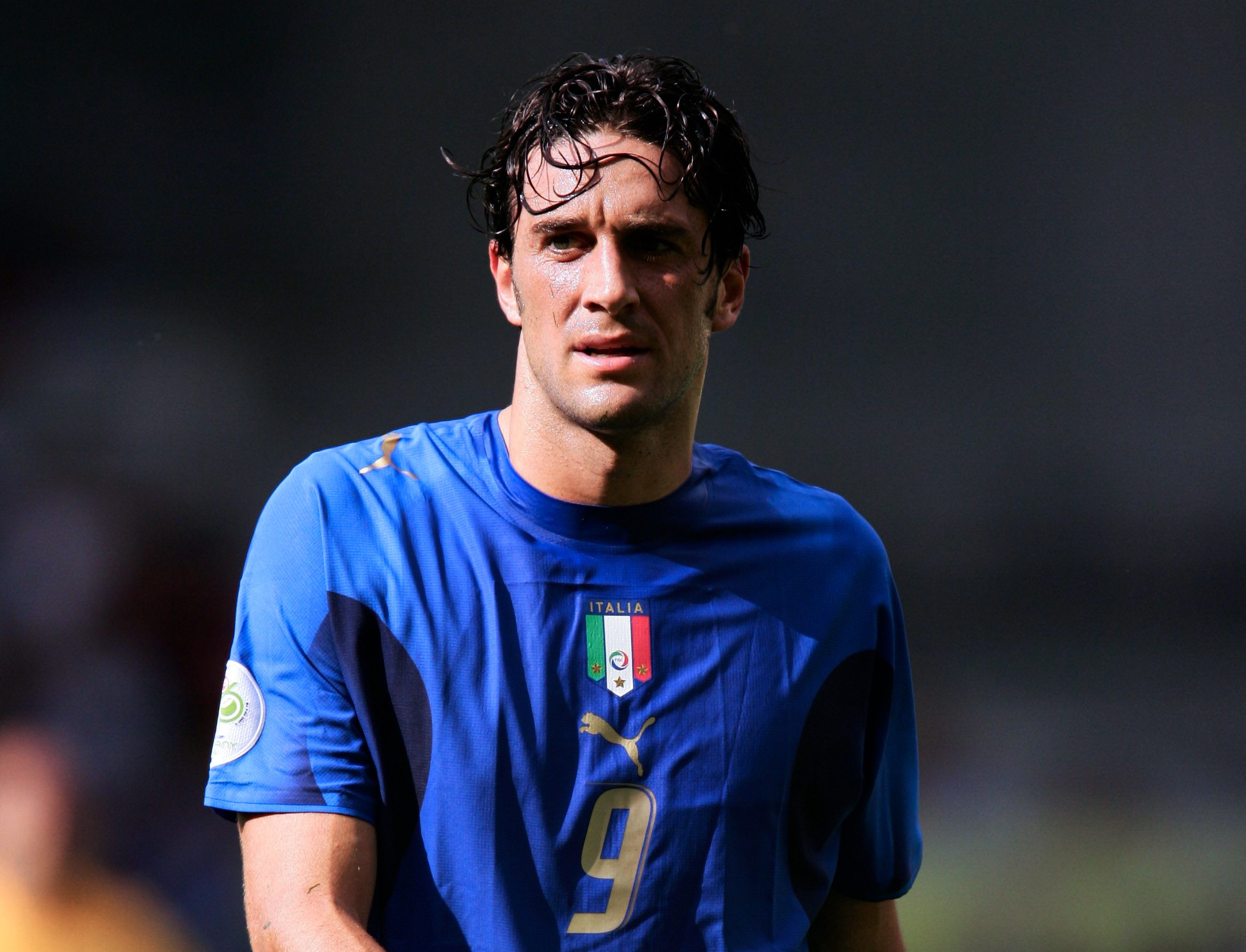 It was the final day of the 2014/15 season and Hellas Verona were hosting Juventus at Stadio Marc’Antonio Bentegodi. The Bianconeri already had their fourth consecutive Scudetto tied up, while Verona, enjoying only their second season in the top flight in the best part of a decade, were comfortably ensconced in mid-table. An unremarkable game as one could imagine: two sides with nothing left to play for at the end of an exhausting campaign exercising little more than a procedural formality.

Yet, in the 48th minute of a so-far ponderous contest, Luca Toni scored one of the most routine goals of his long career – a bobbling, left-foot shot from eight yards that trickled more than flew past Gianluigi Buffon – which would secure him a unique position in calcio history. With that effort, the lanky, cumbersome Toni ascended to the top of the Serie A goalscoring charts at the ripe age of 38, and in doing so, became the oldest Capocannoniere winner in the top flight’s illustrious 121-year history.

It was a remarkable achievement, one which saw Toni claim the Capocannoiere crown for the first time since his 31-goal haul for Fiorentina in 2005/06, a season which completed a trio of accolades for Toni: in 2005/06, he became the first player in 50 years to score over 30 league goals in a single season; while in 2014/15 he became the oldest Serie A top-scorer and the player with the longest wait between Capocannoniere titles.

All this for a man who, when he announced his retirement from football in 2016, marked the passing of an endangered breed of centre-forward that had been driven to the brink of extinction by modern football’s obsession with high-pressing and false nines. Luca Toni was indeed the last of the great target men.

Although he would develop into one of Europe’s most lethal forwards, Luca Toni’s career started off in somewhat ignominious fashion. By the time he registered on the casual football fan’s radar with Brescia in 2002 – where, in a peculiar quirk, he played alongside Pep Guardiola and Roberto Baggio – the 24-year-old Toni had already represented no fewer than six clubs on his nomadic journey through the dusty realms of Serie C and B. 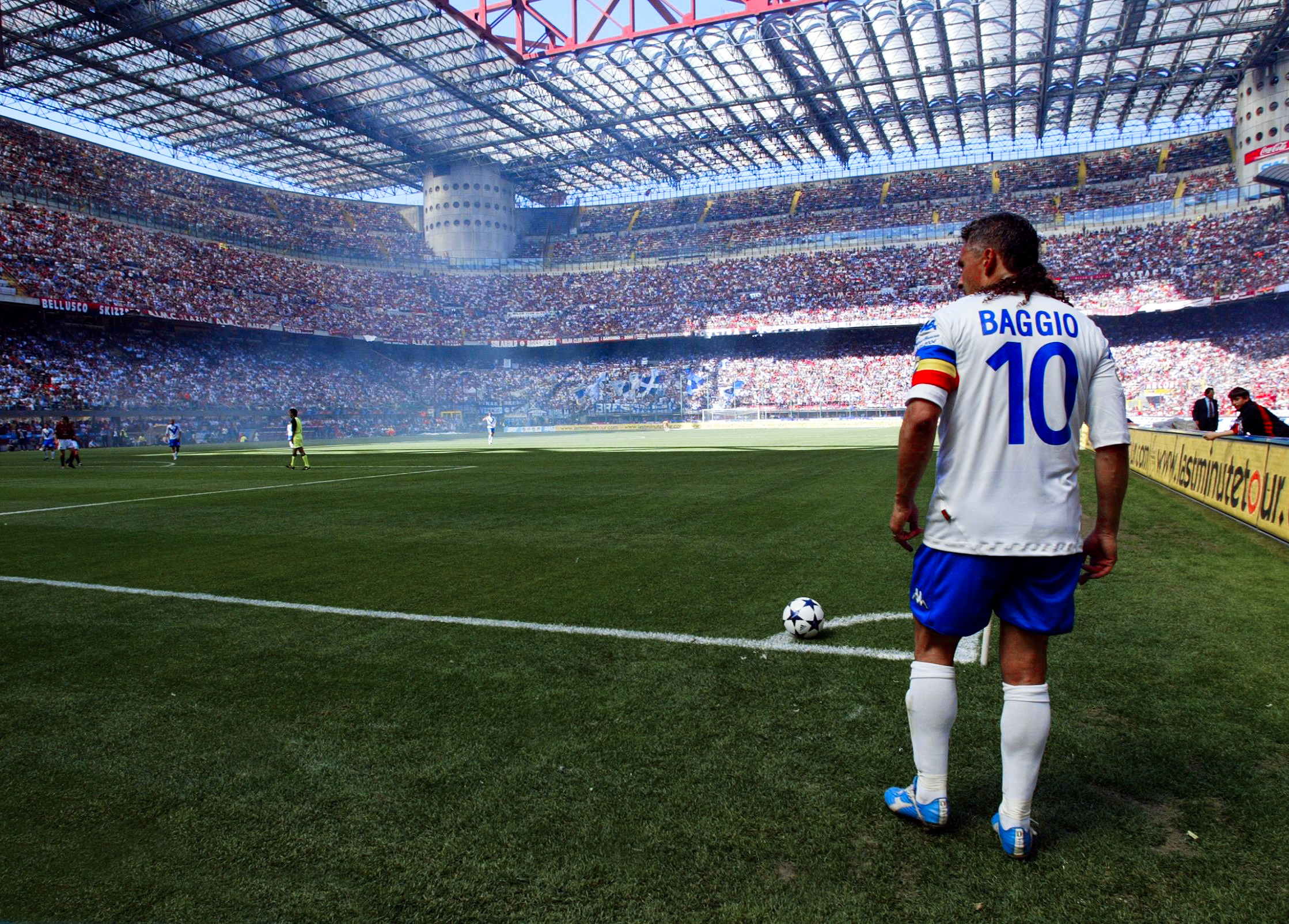 Even in his youth, Toni struck an unorthodox figure. He wasn’t awfully quick, he wasn’t mobile, and he wasn’t blessed with notable technique. He wasn’t running off the shoulder of centre-halves to chase through balls, nor was he picking the ball up from deep and embarking on mazy solo runs. However, what Luca Toni did possess was a formidable physique and that age-old strikers’ knack of being in the right place at the right time. That was what prompted Brescia, managed by Carlo Mazzone, to put their faith in the gangly centre-forward – and they were duly rewarded.

In his maiden season with Brescia – and only his second in the top flight – he registered 13 goals, more than any other player in the blue of Le Rondinelle, which put him level for the campaign with the likes of Hernán Crespo and Vincenzo Montella. It seemed that after seven seasons of wandering through the lower leagues, Luca Toni’s meandering pilgrimage had led him at last to the promised land.

Yet, his second season with Brescia saw his form decline as injuries limited his playing time. Despite losing their top scorer, the club finished higher in the league, registered more points and even qualified for the madness of the Intertoto Cup. Ousted, and with his mentor Guardiola departing for Roma midway through the season, Toni found himself seeking pastures new in the summer.

A reasonable if unspectacular return of 24 goals from 75 appearances in the top flight meant suitors in Serie A were scarce, and thus Toni travelled south to Palermo, whose ambitions to break free of the trappings of Serie B by installing him as their star striker were enough of a lure to offset the perceived discomfiture of dropping once more into the lower divisions.

The marriage of the small Sicilian club and their towering new centre-forward could not have been any more felicitous. Thanks to Toni’s bullish leading of the line, i Rosanero returned to Serie A for the first time in 30 years, while the man himself earned a first call-up to the national side in the process.

Though his tenure with Palermo was characteristically brief, Toni silenced the critics who suggested his ponderous, almost maladroit style of play that had suited Serie B would not serve him well against Italy’s top defences. On his return to Serie A, he recorded 20 league goals to add to the 30 he’d plundered in Palermo’s title-winning campaign a year prior. 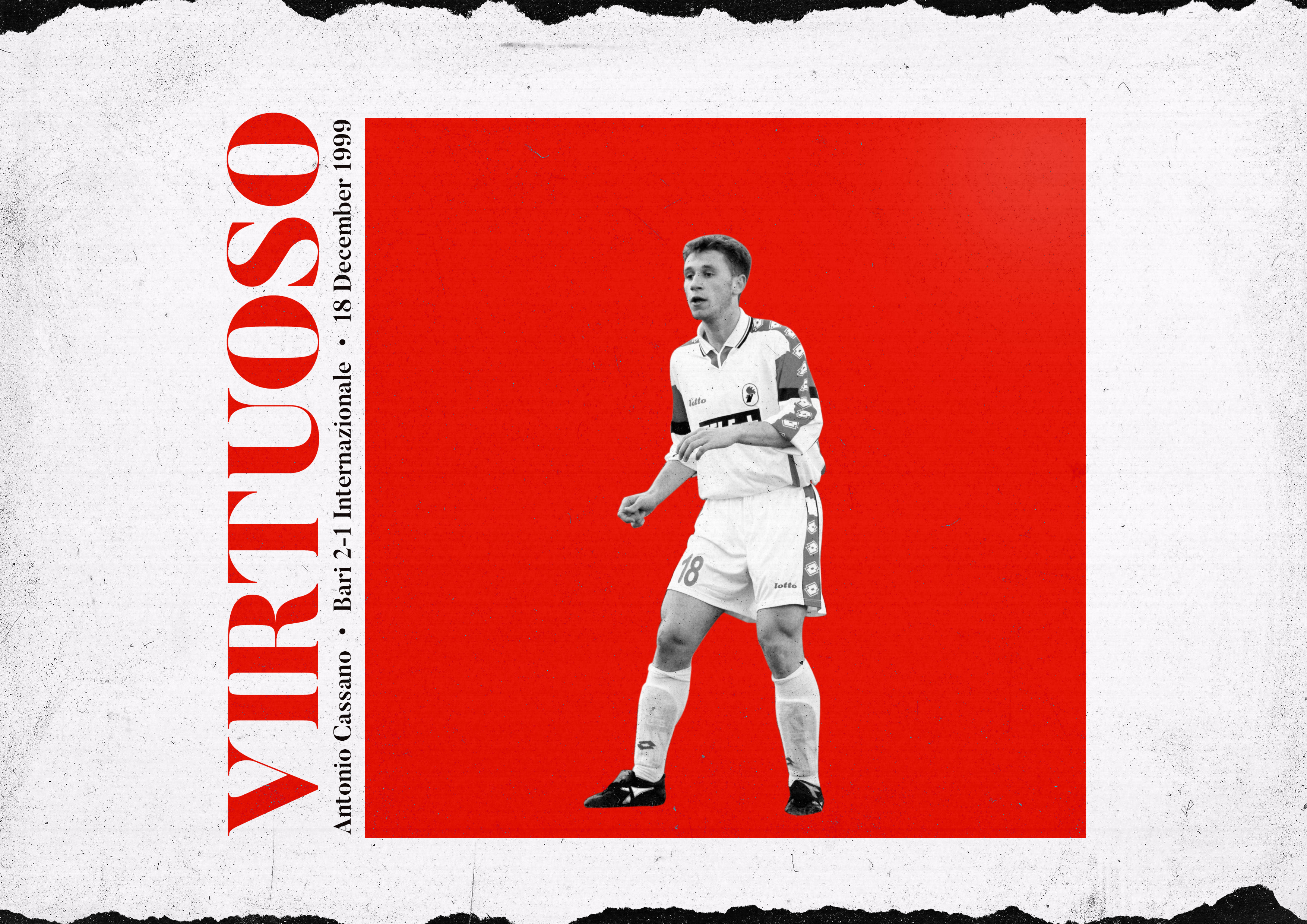 Aged 26 and with 50 league goals in the pink of Palermo, Toni was poached by Fiorentina for a modest €10m fee. After the false dawn of Brescia, perhaps now the promised land that had been but a mirage to him before became crystallised in tangible glory.

The 2005/06 season was to prove a landmark not only in Luca Toni’s career but in the history of Italian football. His 31-goal haul not only provided him with his first and only European Golden Shoe, it marked the first time in precisely 51 years that any footballer in Serie A had scored more than 30 league goals. For Florentines, who had suffered the agony of dissolution and the long climb back up through the lower divisions, Toni’s goals brought the return of European football for the first time since the turn of the century.

Buoyed by three consecutive seasons in which he had scored 81 league goals, Toni entered the 2006/07 campaign being legitimately considered one of the most lethal forwards in Europe. His stock had risen even further given Italy’s World Cup-winning escapades over the summer, during which he’d scored twice en route to the final and been named in the team of the tournament. Not bad for a man who, when compared to his contemporaries, lacked the glamour associated with a world-beating striker.

He didn’t enjoy the pace and skill of Thierry Henry, or the thunderous dynamism of Ruud van Nistelrooy; nor did he possess the selfless endeavour of Samuel Eto’o. Toni forged his place at the peak of European goalscoring through his sheer presence; such a giant of a man, seemingly bereft of grace, but who often occupied both centre-backs thanks to his neat movement and aerial prowess. In the mid-noughties, if you were a full-back looking for an out-ball, Luca Toni, with his ability to hold off defenders and bring others into play, was your man.

So, at 28, supposedly the peak of his powers, with a Capocannoniere to his name as well as a World Cup winners medal, Luca Toni should probably have gone on to forge a career at Fiorentina to rival Gabriel Batistuta’s. Or, at least, a career that would see him make a serious assault on the all-time goalscoring stakes in Serie A. If Alberto Gilardino and Antonio Di Natale, two of Toni’s contemporaries, could make it, then why not he? 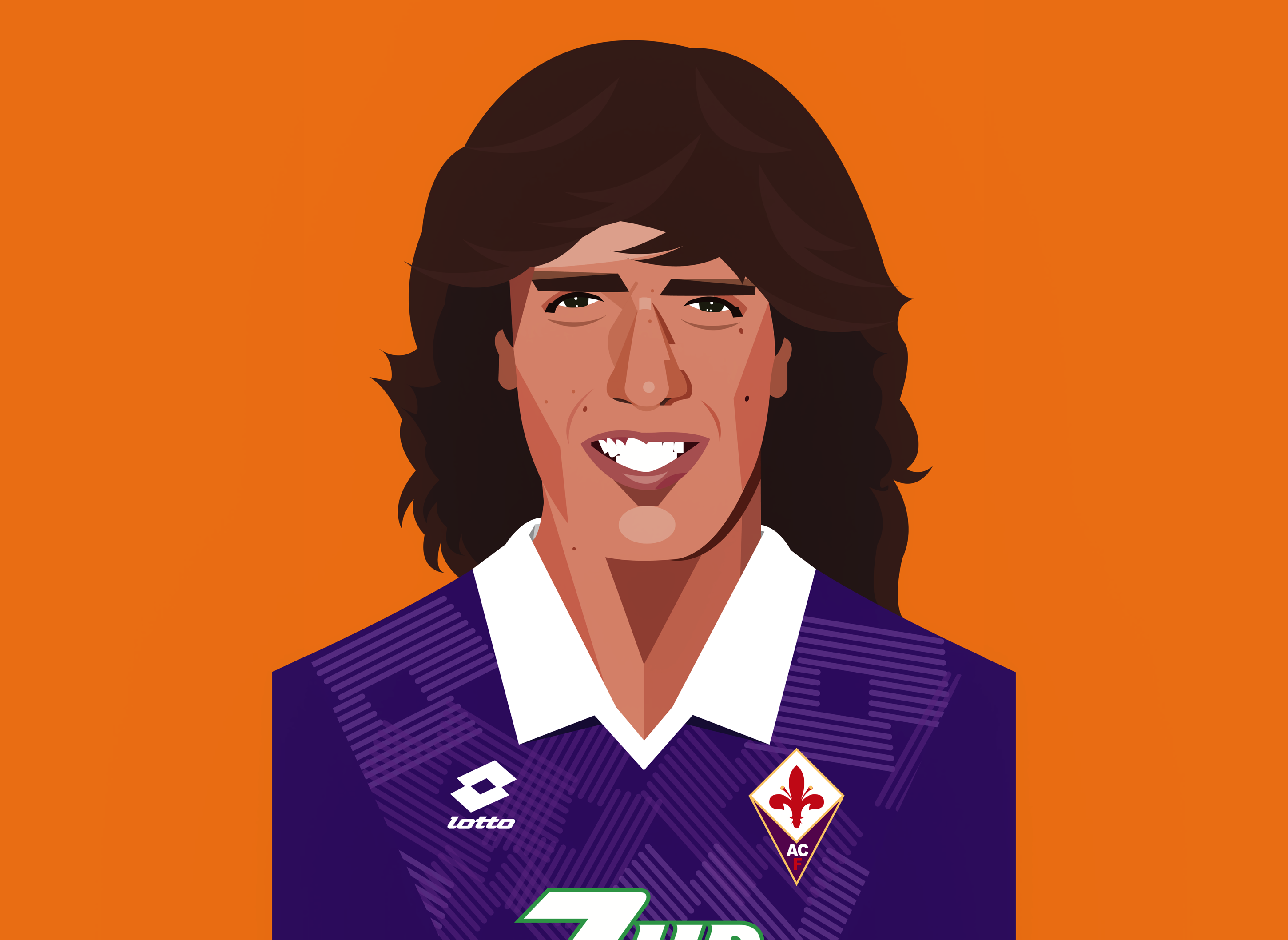 It would transpire that despite his obvious proclivity for scoring goals, Toni’s inability to put down roots would hamper any dreams he had of breaking the most coveted records. Florence would be his home for only two seasons, although this time, the reason for his departure wasn’t solely Toni’s own doing.

Embroiled in the match-fixing scandal that eventually saw Juventus stripped of their two titles and relegated, Fiorentina were docked 15 points and eventually missed out on Champions League football in 2006/07. This turbulence, coupled with continuing rumours of a move abroad, led to a downturn in form for Luca Toni, whose goalscoring return nearly halved from 31 to 16. Thus, when Bayern Munich came knocking, there was only one outcome.

There has not been a long and documented history of Italian strikers making the trip north across the Alps to Germany, and it seemed a curious footballing mystery that was debunked when Luca Toni took to the Bundesliga with ease in his first season in Bavaria. With 39 goals in all competitions, he helped propel Bayern to a domestic treble.

But, as ever is the case in the tempestuous career of Luca Toni, thunderheads amassed on the horizon before long. An Achilles injury hindered his playing time in 2008/09, despite scoring 15 league goals, and Bayern relinquished their Bundesliga crown. The following season, the storm was in full sway as a now 32-year-old Toni clashed with the unpredictable Louis van Gaal, who banished the forward for his supposed indiscretions. Signed for nearly €12m, Toni was given a free transfer at the end of his third season in Germany, and would subsequently embark on another long period of nomadism.

Four clubs in four seasons, including an improbable short-term move to Italian champions Juventus, ensued, during which he only managed 13 goals in 80 league games seemed to put paid to the notion that Toni was anything other than a declining former power, eking out a living in the dying throes of his long and varied career.

However, when he joined newly-promoted Verona at the beginning of the 2013/14 season, following a modest campaign back at Fiorentina which, if anything, merely corroborated the old adage of never returning to your exes, Toni was to enjoy something of a renaissance. The footballing landscape had changed in the decade since he had topped the Serie A goalscoring charts, but in a league that was still catching up with the dynamic, high-pressing football favoured in England, Germany and Spain, there was still a place for the ponderous target man.

Verona capitalised and perhaps for the first time since his halcyon Palermo days, Toni once again found himself the main man; a large, slow, will-head-anything-at-any-cost fish in a small pond. It seemed that this is what Toni had been missing. Out of place (eventually) at Bayern and Roma and Juventus, where dynamic, pacey football with its quick transitions and the necessity for acknowledging that you, as an individual, were merely a cog in a far greater machine, Luca Toni found solace at a club where, in the absence of any prior knowledge or experience, he was expected to be the main supplier of impetus.

In his first season with Verona, he provided a third of the club’s league goals; in his second, this rose to nearly half. And on both occasions, he broke the 20-goal barrier. When, in his third season – something of an anomaly for Toni; he had only enjoyed a third season at the same club once in his entire career – he scored a Panenka penalty against champions Juventus, his sixth goal of the campaign, he immediately retired after the game with one match still to play in the calendar against his former club Palermo.

At no point in his career could Toni have truly claimed any real allegiance to the litany of sides he turned out for, but it’s perhaps as close to loyalty as he ever showed that his reason for retiring on the spot following the Juventus game was that so his final match for Verona would be in front of the adoring home fans that had taken him into their hearts.

He departed the sport in a landscape alien to the one he had begun in nearly 20 years prior. Cumbersome yet effective, awkward yet prolific, Toni had stubbornly clung onto his place in football even as the game evolved around him and he point-blank refused to follow suit. Or perhaps, more to the point, he couldn’t.

With 322 career goals in 705 games, and 169 in Serie A alone, Luca Toni may not have gone down as the most glamorous or the most talented, and nor did he ever feel indebted to the clubs that gave him such a platform as to perform on, but he was prolific. And when you’re a centre-forward, that’s all that really matters.