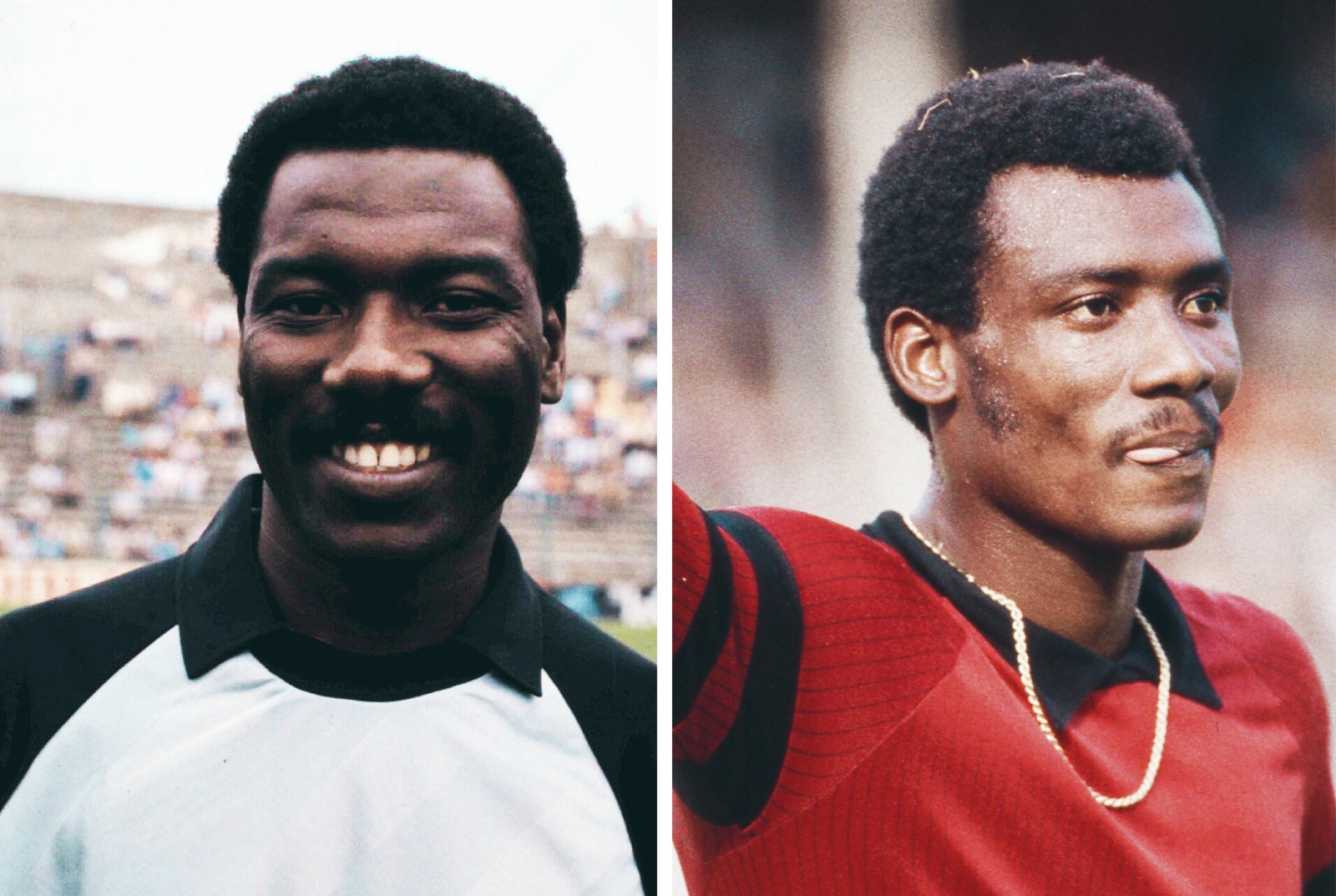 You can’t trust black goalkeepers. So said the prevailing wisdom for much of the last century. Black players, the story went, are untrustworthy – fine on the wing but lacking in fight. Like any stereotype worth resisting, it was deeply ingrained and difficult to change.  It would take two of Africa’s greatest ever goalkeepers to shift the paradigm. That they were born in the same country and also happened to hate each other was mere coincidence.

Joseph-Antoine Bell was born in October 1954 in the Nkongmondo district of Douala, Cameroon. A public schoolboy with a talent for barking instructions, he fell in love with goalkeeping during one of his many games at boarding school. By his 19th birthday, he had joined local outfit Union Douala, becoming a starter as they won two out of his first three league championships.

Thomas N’Kono would be raised in less salubrious surroundings, dirt-poor in a small village just west of Lake Ossa. Life in the countryside offered little distraction, save for games of football with his friends and family. Eventually he was spotted by local side Éclair Douala, helping them gain promotion in his first year, before moving to capital side Canon Yaoundé.

There he would win four titles in six years, including two Champions Leagues. Already, word was spreading of a special player in the city of the seven hills, his African Player of the Year award in 1979 a shining recognition of his towering talent.

Bell, meanwhile, had established his own reputation as one of the continent’s finest goalkeepers, his form prompting a transfer to heavyweights Africa Sports in Abidjan. By the time he moved again, to El Mokawloon in Egypt, he would win every African honour, becoming one of the country’s most recognisable sportsmen in the process.

Aided by the coaching programmes of Yugoslav legend Vladimir Beara, Cameroon qualified for the 1982 World Cup in Spain with two of the rarest artefacts in African football in tow – world-class goalkeepers. It would be N’Kono who drew first blood in their nascent rivalry, Bell watching from the bench as his competitor captained the Lions at their first international tournament.

Two gallant draws against Peru and Italy followed, with the Africans eliminated by the latter’s superior goal difference, but their arrival had already been overshadowed by the performances of the 26-year-old keeper. N’Kono’s razor-sharp reflexes and languid reach had conceded just three goals, and after the tournament, the vultures circled with intent. Brazilian giants Fluminense and Flamengo fluttered, but it was La Liga’s Espanyol who would eventually secure his signature. 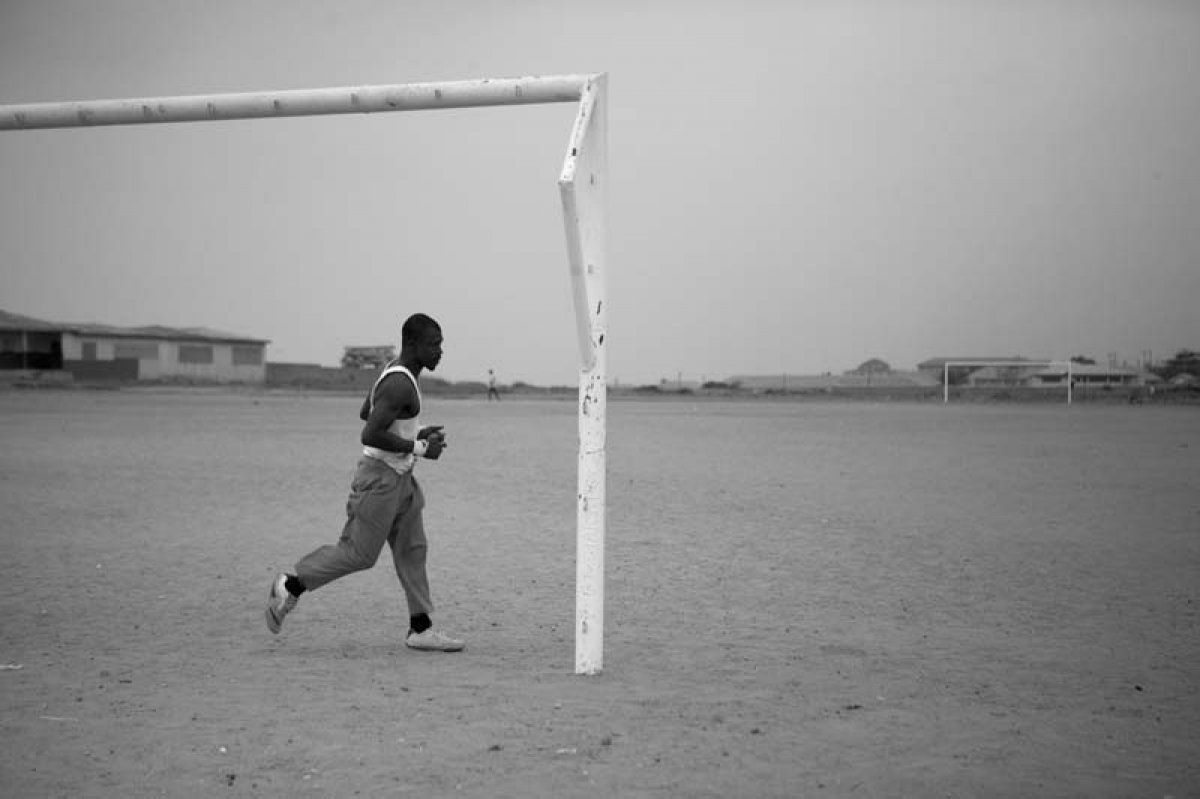 With another award for the continent’s best player under his belt, N’Kono become the first African goalkeeper to star in European football, an unknown entity in a world waiting eagerly to write him off. He daren’t give them the chance, his performances at the Estadi di Sarrià proving all the doubters wrong.

N’Kono was still the undisputed keeper by the time the African Cup of Nations swung round two years later, but club commitments saw him leave the tournament after the opening two games. Bell, who by this stage was in his second year in North Africa, saw his chance and took it, keeping consecutive clean sheets as Cameroon won a first continental trophy.

With another stellar year in Egypt behind him, Bell moved to Marseille in the summer of 1985. Just as N’Kono had three years earlier, Bell would face an army of detractors, who felt that the colour of his skin precluded any hint of footballing ability. A penalty save in the final of the Coupe de France in his maiden season helped silence the doubters, however, and he spent three undisputed years as OM’s first-choice stopper.

Despite his stellar performances, though, resentment had always boiled under the surface. After moving to Bordeaux in 1989, Bell returned to the Stade Vélodrome on 15 April 1990, a Marseille stalwart expecting a humble reception. Instead he was subjected to one of the most shameful racist incidents in French football history, the game having to be stopped on several occasions as bananas and other projectiles rained down from the stands.

The incident was the clearest example of French football’s difficult relationship with racism, and an exasperated Bell appealed to Ligue 1 chief Jean Fournet-Fayard to do something about a problem that could no longer be ignored.

A thousand mindless idiots could not distract ‘JoJo’, however, from his ultimate aim of leading Cameroon out at the World Cup that summer. He had displaced N’Kono yet again from the team, the latter’s horrow showing at the Cup of Nations in January leading to widespread changes in the side.

Two years earlier, Valery Nepomnyashchy had taken over the national job from the departing Claude Le Roy. Horrified by the lack of organisation he encountered in Yaoundé, the Russian set about improving the structures in and around the team, overcoming the language barrier to deliver the Lions to their second World Cup appearance.

He would bring a mix of amateur and professional players to the tournament, 38-year-old Roger Milla the star turn in an ebullient and physical outfit. Again they would be blessed by the presence of N’Kono and Bell, as well as another top-class reserve in the shape of the 26-year-old Jacques Songo’o. Again, however, their strength would be their downfall. 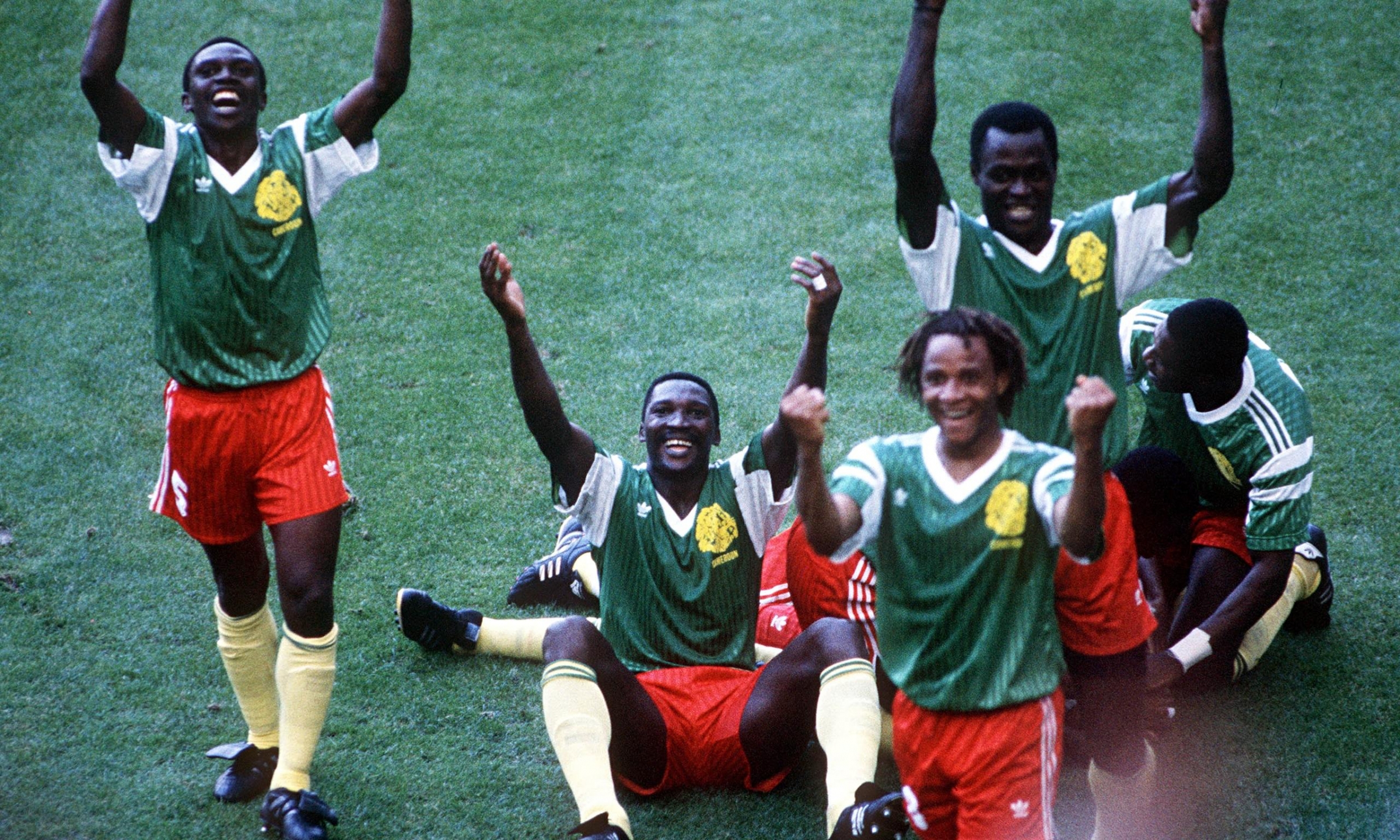 Bell had just been voted the second best player in French football after another excellent year in Ligue 1. Perhaps spurred on by the plaudits, he gave a frank interview to France Football on the eve of the tournament, criticising the team’s lack of organisation and admitting they had “no chance of coping with Argentina, or any other team”. His analysis of their chances was typically blunt, suggesting they would “go out in the first round without much glory”.

The reaction was swift and damning, and he was dropped from the team post-haste. N’Kono, who had been preparing to watch Diego Maradona and Claudio Caniggia from the bench, was informed just five hours before kick-off that he would be starting.

Bell was furious, suggesting the manager had given into to “high Cameroonian domestic politics”. Others believed Bell’s constant clamour for improved bonuses had irritated the Fécafoot hierarchy. Rumours even began circulating that the sports minister was considering revoking his citizenship, but as the recriminations set in off the pitch, N’Kono considered his unfolding Latin nightmare on it.

He needn’t have worried; Cameroon ran out surprise 1-0 winners, Argentina paying handsome retribution for failing to prepare seriously for the game. N’Kono would again be instrumental as Cameroon surged to the quarter-finals, where only a late collapse against England prevented them from becoming the Africa’s first World Cup semi-finalists. His performances were so impressive that even a young Gianluigi Buffon, watching the tournament intently as a spritely midfielder at home in Tuscany, moved his position to goalkeeper.

Bell, who had sat out the rest of the tournament behind third choice Songo’o, returned to Bordeaux with his tail between his legs. It wouldn’t be the first or last time his outspokenness got him into trouble. Some thought his outbursts were selfish, while others viewed them as a genuinely misconstrued desire to professionalise the structures around the team. Either way, he found himself looking over the shoulder of his great rival as Cameroon made more footballing folklore.

Whilst great players in their own right, Bell and N’Kono represent different goalkeeping ideals. The latter was a classic shot-stopper, a sentinel with the reflexes of an Olympic gymnast and the presence to match. Bell was more cerebral, an organiser who eschewed theatre for attention to detail. If he was a quasi-libero in the Claudio Bravo mould, then N’Kono was a Joe Hart, in the most sincerely positive sense.

Their styles brought different contributions to the national side. Bell’s intelligence could see Cameroon’s defence sit higher up, where the technically-gifted keeper could sweep up and contribute passes in the early attacking phases. N’Kono preferred his defence to sit deeper and more compactly, a tactic which backfired when England were invited onto a weary Lions defence in 1990.

As the 1994 World Cup loomed on the horizon, it seemed as though Cameroon had learned its lesson. Bell was number one and ready for his swansong in the national team. N’Kono, meanwhile, had left Espanyol a legend after a decade and almost 300 uninterrupted appearances. A few years in the lower reaches of Catalan football had been followed by a surprising move to Bolivia, but his undoubted quality still justified a call-up to the squad as a reserve. Yet again, however, their insidious relationship would infect the team. 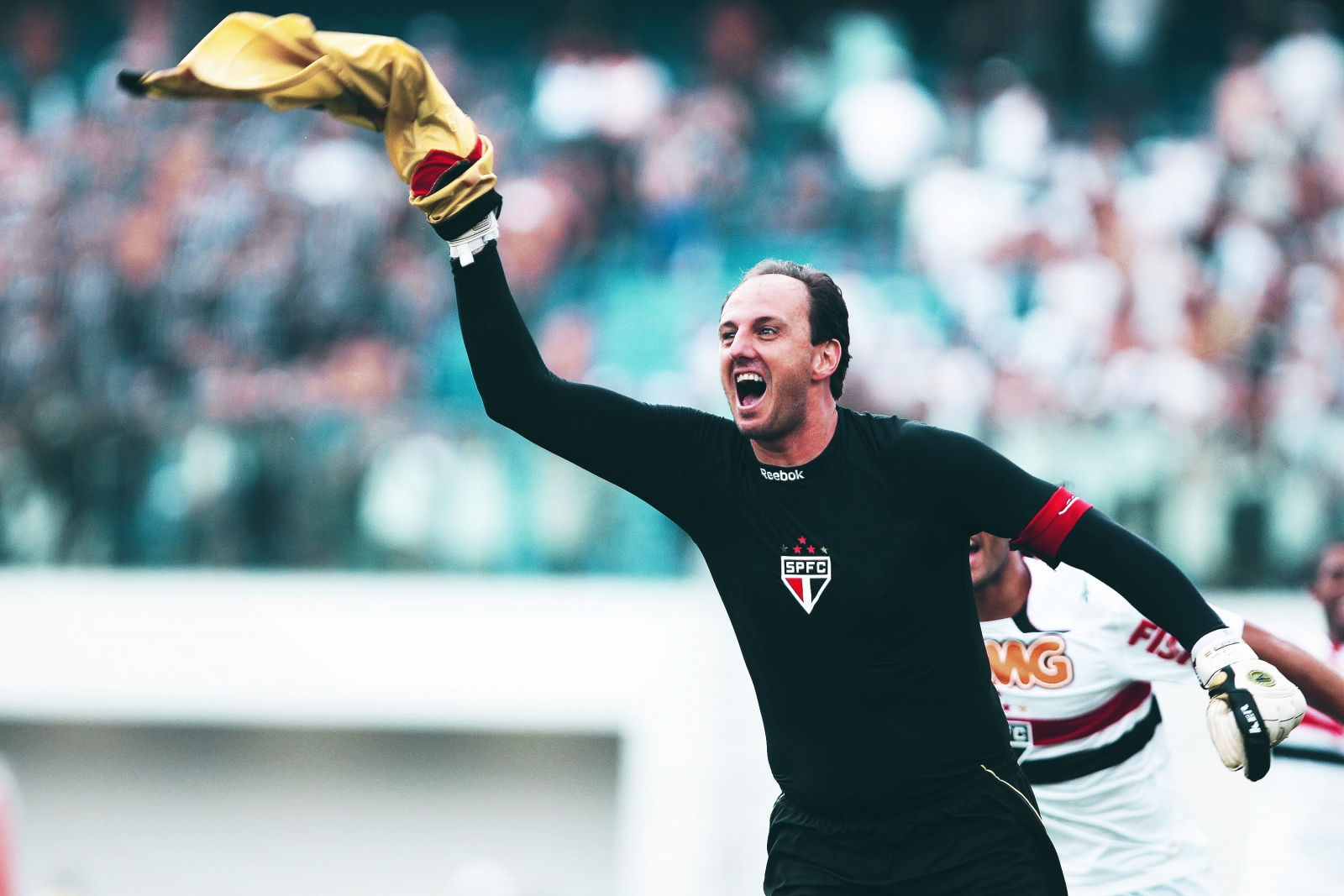 By the time Cameroon played its opening game against Sweden on 19 June, N’Kono had already completed his debut season in South America with Bolívar. The coaches felt that his understanding of the South American game would be pivotal in the forthcoming clash against Carlos Alberto Parreira’s Brazil, and so held a meeting to inform the squad that he would be starting.

Except, of course, he wouldn’t be. As Jonathan Wilson recalls in his book The Outsider, Bell would supposedly hold a meeting with coach Henri Michel, at which he blamed his exclusion from the squad on – you guessed it –  political influences. The team, suitably incensed at the interference from outside agents, demanded that he should play.

Whether Bell’s accusations were true remains unsolved, but in the end, all the intrigue proved moot. Cameroon were stonked in their remaining games – 3-0 and 6-1 – and were out of the tournament. Bell was again public enemy number one, having been dropped for the final defeat against Russia. ‘Madiba’, as he would be ironically christened for his penchant for eulogising about the game, would even have his house burned down by fans, so distraught were they by their country’s humiliating performance. He retired after the tournament, arguably his nation’s greatest goalkeeper withdrawing from the stage without ceremony.

N’Kono would continue playing for another three years, retiring in his 40s after reaching the Copa Libertadores quarter-finals with Bolívar.

Both were quick to use their unique talents after retirement. When not lambasting his country’s football administrators, Bell has spent two decades as a forthright and entertaining radio commentator for RFI, as well as running unsuccessfully for the Fécafoot presidency.

N’Kono’s ambitions were more sedate, becoming assistant to national team coach Winifred Schäfer for the 2002 Cup of Nations before being arrested for “black magic” in his side’s semi-final clash against Mali. He has since returned to Espanyol, nurturing talents like Carlos Kameni and Roberto in the art of goalkeeping for Los Periquitos.

The debate as to who was better continues to this day. For every Bordeaux fan recalling Bell’s studious leadership, you can find an Espanyol supporter lathering about N’Kono’s legendary showmanship. Everybody agrees, however, that these were two of Africa’s greatest footballing exports, two goalkeeping monoliths who smashed stereotypes and barriers on their way to becoming idols of West African football.