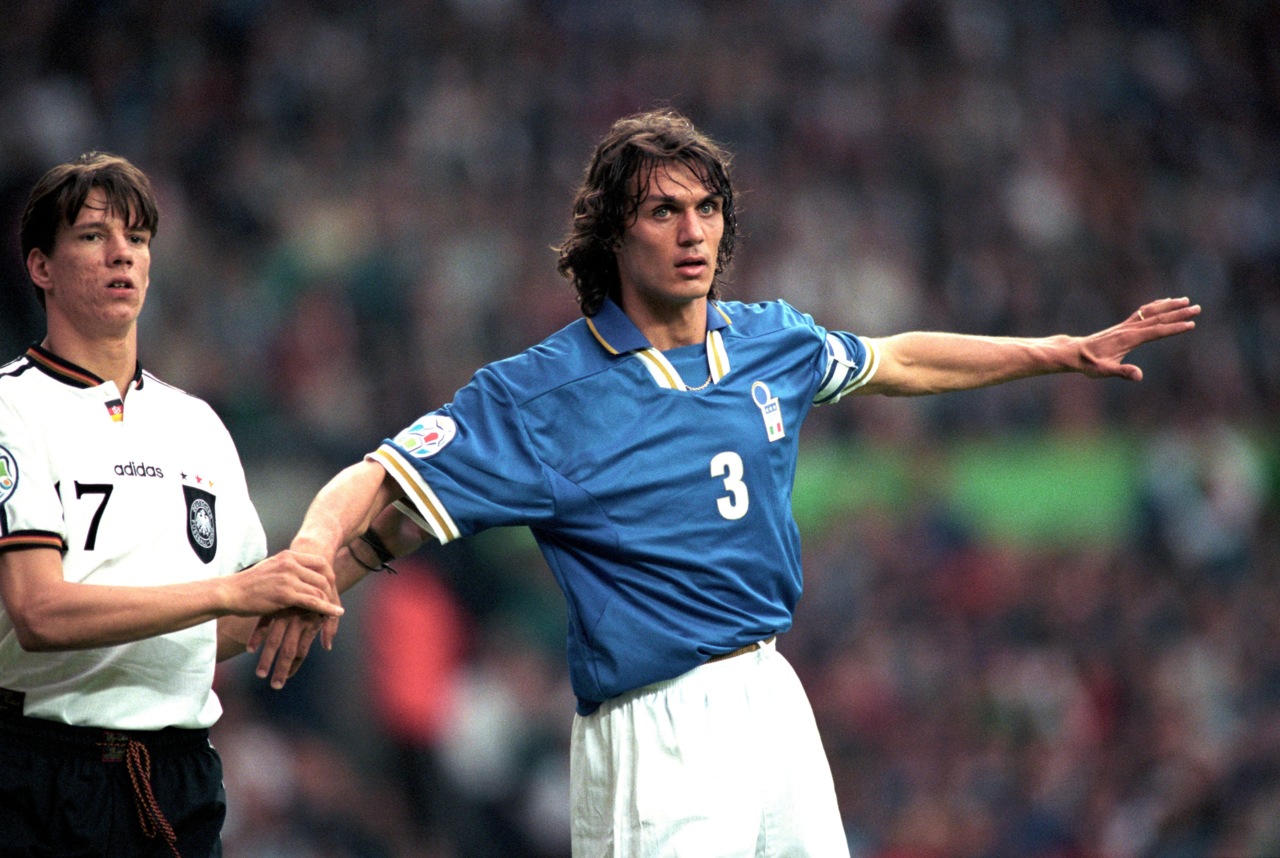 WHEN IT COMES TO LISTING THE GREATEST DEFENDERS OF ALL-TIME, Paolo Maldini is up there with the best there ever was. His calibre is proven in the European Cup and the Champions League, while the longevity of his career is a direct result of his intelligent defending and love for AC Milan, where he stayed for the entirety of his career.

He is the son of former Milan manager, player and captain, Cesare Maldini, and he carried on the tradition of winning numerous league titles and European trophies in a career that lasted for over two decades. The younger Maldini was rewarded for his loyalty in both the long and short term, but it wasn’t plain sailing as he suffered numerous setbacks over the years, as well as an acrimonious departure from the club after his powers had started to diminish.

His ability to bounce back is somewhat akin to a comic book villain, who just refuses to give up no matter how many times he’s foiled by his opposition. The difference is that Maldini won it all, while Victor von Doom and the rest tend to come off second best more often than not. The point is, he never wavered despite the lean times, and he rolled back the years to claim the last of his Champions League titles a full decade after the previous win.

His club success was never replicated on the international stage, but that’s often the case for one-man teams who give their all for the cause – just ask Paul Scholes. Above all, he was the ever-present heartbeat in a team that dominated European football over different eras, and he always came back as strong as ever. He’s rightfully seen as a legend in world football, and, in a league mired by corruption, he was seen as a beacon of class, both on and off the pitch.

Maldini made his AC Milan debut at the age of 16, coming on a substitute against Udinese during the 1984-85 season. It was to be his only appearance in his maiden year, but it was enough for him to gain a place in the first team, playing at right-back. He later settled into his familiar left-back and central defensive roles he became famous for. It was a mark of his ability to learn and improve that, to cement his place at left-back, he was required to improve his left foot. Two years later, he had mastered his game and was comfortable distributing off either side.

The following year Silvio Berlusconi bought the club, and Arrigo Sacchi was brought in from Parma in 1987. Few believed that the former shoe salesman had what it took to make the transition into management, but he revolutionised the game with a number of key Dutch signings, and Maldini a key cog in the famous back four that comprised of Alessandro Costacurta, Mauro Tassotti and the great Franco Baresi.

In his first full season, AC Milan won the scudetto as well as the Supercoppa, with Maldini marking his spot in the side. In fact, he made at least 25 league appearances every year until an injury ravaged his season in 2001.

Most defenders become more prominent with age, but Maldini proved his worth during Sacchi’s first spell with AC Milan, and continued to show his class throughout his career. Amongst all of the trophies and accolades he won during this period, there are two in particular that stand out in the glittering array of cups and awards.

In 1988-89, Sacchi’s side took their first steps into football folklore as they won the first European Cup of Maldini’s career at Camp Nou. They saw off Real Madrid with a comprehensive 6-1 aggregate victory in the semi-finals and beat Steaua Bucharest 4-0 in the final thanks to a brace apiece from Ruud Gullit and Marco van Basten. It was the blueprint for Italian dominance in the early 1990s, and Maldini was at the heart of it.

Milan became only the second side to successfully defend a European Cup the following season after seeing off a spirited Benfica side in the 1989 final. At just 21, Maldini was a two-time winner with the rest of his career ahead of him. Even then, nobody would have guessed that he would continue to perform regularly at such a high level for another two decades.

His career had taken off domestically, whilst his European exploits had given fans hope that he could replicate his commanding form when on international duty. So when Italia 90 came around, it wasn’t much of a surprise that Italy topped their group with three wins, while conceding no goals. They made it all the way to the semi-finals without conceding, but they were dumped out mercilessly on penalties after a 1-1 draw against an Argentina side inspired by the majesty of Diego Maradona. It typified the nature of Maldini’s time playing for Italy, as they managed to reach the World Cup final four years later, though they were again seen off on penalties by Brazil.

Back at Milan, Fabio Capello replaced Sacchi as manager in 1991, and they reached the European Cup final once more in 1992-93, though they were defeated by a classy Marseille side in what was seen by many as a major upset. They bounced back again in 1994, reaching yet another final, this time facing off against the famous Dream Team Barcelona side managed by Johan Cruyff. They routed them in a dominant 4-0 victory, which etched their place in the history books.

AC Milan may have been struggling in Europe in the mid-90s, but Maldini’s stock was still high. He later revealed that then Chelsea manager Gianluca Vialli tried to sign him in 1996, and somewhat surprisingly, he seriously considered the offer, telling Sky Sports: “I considered his [Vialli’s] offer because I was hurt by some things that had been said about me, but then I preferred to remain with the club of my heart. That was the first and last time I thought about leaving.”

Read  |  How Franco Baresi became one of football’s greatest defenders

Instead, he chose to stick with Milan, and was handed the captaincy after the retirement of legendary captain Franco Baresi at the end of the 1997-98 season. He helped see the club through a barren spell in European competition, and it was far from plain sailing domestically.

Capello was back again as the manager, but this time he was unable to repeat their earlier dominance as the team finished in 10th, leading to his eventual dismissal. Maldini’s continued perseverance eventually paid off as they won the league the following year under Alberto Zaccheroni, and he was ever present playing as part of a back three – highlighting his ability to shine anywhere in defence. They still looked to be off the pace when compared to Europe’s elite, and it seemed that Maldini’s time at the top of the world stage could be coming to an end.

Maldini had been at the club for over a decade by the time of the 2001-02 season, and the back-to-back European Cup wins felt like a distant memory. From a fresh-faced Andrea Pirlo to the sublime technique of Andriy Shevchenko, there was obvious class throughout the team, but they struggled to a fourth-placed finish in the league, while they lost in the semi-finals of the Coppa Italia and the UEFA Cup.

Carlo Ancelotti had taken the helm, and he sparked a revival in their fortunes. The 2002-03 UEFA Champions League final was an all-Italian affair that pitted the Rossoneri against the Old Lady of Juventus at Old Trafford. In a stereotypically Italian affair, they fought to a 0-0 war of attrition, and Milan won the resultant shootout 3-2. Maldini had once again emerged victorious in a game that highlighted his strengths on the pitch.

In more modern times, the exploits of a certain team in Istanbul became the stuff of legend, but what of the side that snatched defeat from the jaws of victory? The manner of their Champions League final loss to Liverpool might have crushed lesser men, but Maldini has always played the long game, and they got their chance for revenge two years later as the two sides lined up once again, this time at the Olympic Stadium in Athens.

How must it have felt for Maldini to line up against the same Liverpool team that stole the Cup away from them a few seasons earlier, just as Marseille had in 1993? This time there were to be no mistakes, and the Reds had no reply for the excellence of the Italians, in particular Filippo Inzaghi. It had been 18 years since Maldini first lifted the European Cup, and it was his second win as captain. His fifth win would prove to be his last, but his legacy and a continental Goliath was confirmed. The planet kept on spinning and Maldini could only keep up his defensive duties for so long. 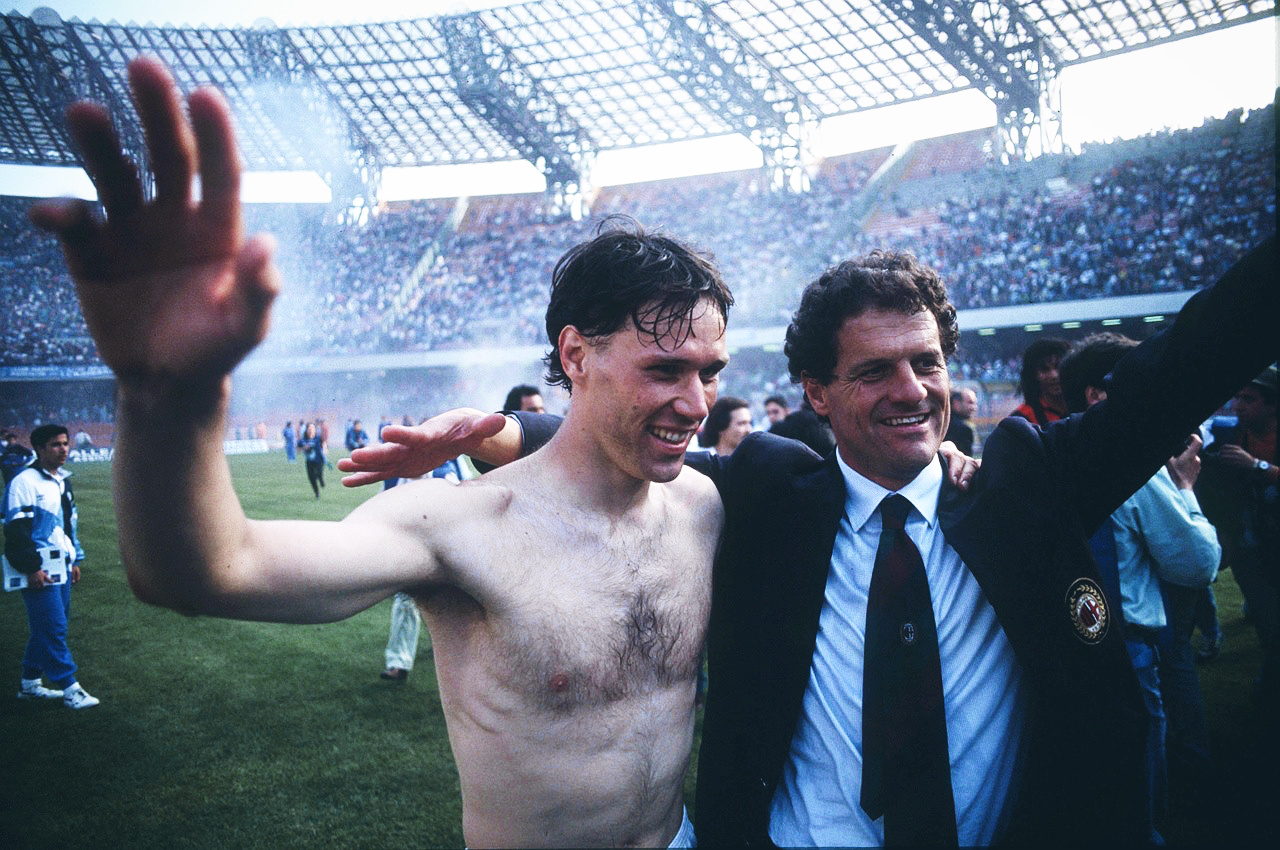 His final season came in 2008-09, but there was still enough talent left to extract 30 league appearances during his swansong. Internazionale may have finished top, but Milan managed to take the third Champions League spot after finishing level on points with Juventus in second. His parting gift was to help his team earn the opportunity for yet another crack at the Champions League, though he left on acrimonious terms as he appeared to be unhappy with the direction the club was taking.

How can you describe the career of a player like Paolo Maldini? There isn’t enough space to list all of his achievements, and he’s likely won and forgotten more than most players could dream of winning.

The problem with quality defending is that it’s often hard to tell when it’s happening. Chest thumping centre-halves in the mould of John Terry or Nemanja Vidić may steal the headlines, but that doesn’t diminish the role that intelligent defenders play. It’s all about positioning and reading the situation. In other words, a great defender is essentially a highly paid bodyguard. Never ignored, but hardly ever thanked. If they do their job correctly, everyone focuses on the star. If they fail, it’s their fault alone. It may not be a completely thankless task, but it’s a testament to Maldini’s footballing intelligence that he’s revered for his influence and consistency over the decades.

One-club players are often few and far between, and they’re becoming an increasing rarity in an era in where loyalty means little when compared to a higher wage, or the allure of silverware. Players like Maldini don’t come around often – and few can match his success rate at the very top of the game.

The news that Maldini has become the new co-owner of an NASL team named Miami FC shows that he still has a lot to give to the world of football, although he’s the first to admit that management is off the agenda due to politics with presidents and the excessive exposure that comes from the media. He’s also evidently worried about the tradition of AC Milan, given what he said to La Repubblica in 2012: “Arrigo Sacchi gave us the mentality that we’d become the symbol for a style of football. It was magical. But slowly the magic was lost and Milan transformed into an absolutely normal club. There is nobody in the current Milan set-up who wrote history, other than those in marginal roles. Milan had the magic for 25 years, but then lost it.”

Despite being a thinly veiled attack on Milan’s hierarchy, he would be doing himself a disservice if he didn’t consider himself an integral part of the past success of the club. He may have been booed by a small section of supporters during his final game, but his comments turned out to be prophetic. Milan finished eighth in 2014 and 10th the following year, marking the end of a run of qualifying for European competitions that dates back to 1998.

Fortunately for Milan, Maldini understands better than most that it can often take a while to get things right