Few cities in the world are brought to a complete standstill when hosting a football match. Glasgow is one, as is Milan. Manchester is also gripped in the feverish excitement of derby day when City meet United, especially now that both teams have recently tasted the success of Premier League supremacy. However, there is one city that stands above all when it comes to witnessing a footballing carnival.

Buenos Aires, the capital of Argentina, becomes the focal point of global football at least twice a year when it hosts the Superclásico. The match is a phenomenon and the spectacle momentous. It is not merely a football match; it is a national event that commands an unrivalled level of attention. Work becomes secondary, the to-do list is swept to the side and all overhanging bills are thrust to the back reaches of the mind for almost two hours as Boca Juniors take on River Plate.

It is a local rivalry not only steeped in politics; it is born out of the most intense love for the game. That love can often turn ugly to a fiery hatred, as the two clubs eternally fight to be Argentina’s ultimate team. Boca have historically done better than River in the derby but the stats are staggeringly close.

Their rivalry prompted outrageous scenes in 2011, when River was relegated to the second division for the first time in their 110-year history. Boca fans treated it like a kind of celebratory funeral procession, lining the streets hoisting paper maché coffins with River’s colours as they sang “up and down, up and down, just like a lift”. Boca’s fans revealed the dark undercurrents which permeate this rivalry, partly defined by the hardcore faction of fans known as the Barra Bravas. However, above all else, it is an illustrious meeting that has given birth to some of the finest names associated with the sport.

The match that exhilarates the country and defines Argentine club football’s passion was described by The Observer as the number one sporting event to attend before you die, commenting that it makes “the Old Firm look like a primary school kick-about.” Its history is rich with stories of Argentina’s two most distinguished teams producing classic after classic while providing the platform for future stars of the world game.

The annals of this great fixture reveal a who’s who of South American footballing legends. Diego Maradona, Alfredo Di Stéfano, Juan Román Riquelme, Gabriel Batistuta – they are but just a few of the great players to announce themselves in this illustrious rivalry. In the stadiums of La Bombonera and El Monumental in the thriving football city of Buenos Aires, football’s superstars are born.

One of Superclásico finest graduates is Diego Maradona, who endeared the Boca Juniors’ faithful for a year, before moving to Barcelona. Maradona had already established himself in his home country with Argentina Juniors, scoring 116 goals in 186 league appearances during his five years at the club. However, his move to Boca signalled the rise of El Diego in his home country.

Boca had always been Maradona’s ambition, from his humble beginnings in an Italian working-class neighbourhood close to the old port of Buenos Aires. When Maradona pulled the Boca jersey on and walked out onto the pitch, he was reminded of his father, Chitoro, who had worked on the ports many years before. Boca were a team that the Maradona household held dearly; there was never any doubt regarding where Diego would win his first Argentine league championship. 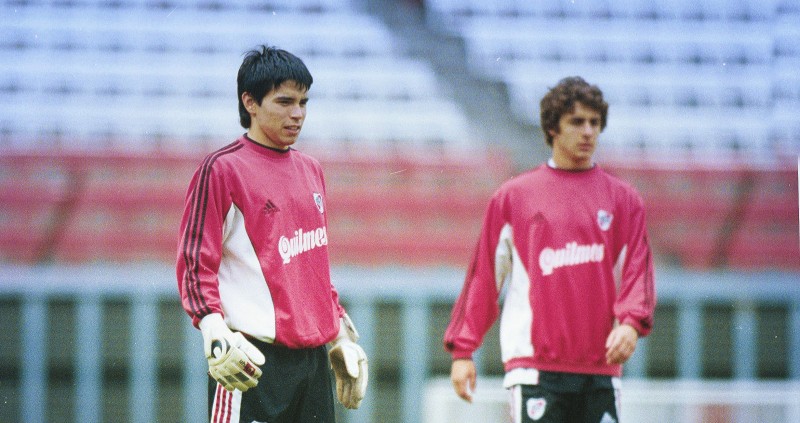 En route to that championship, Maradona experienced the unique intensity of Superclásico for the first time. The night of April 10, 1981; Maradona was still only 21. La Bombonera was a portrait of feverish excitement and high-charged emotion, 60,000 fans packed into it to bear witness to one of the most important matches in Boca’s history: the championship-deciding derby with River Plate.

The blue and yellow half of the Argentine capital toiled over the unthinkable scenario of losing out. They couldn’t help but pin their expectations on the young shoulders of Maradona. What followed from the future World Cup hero was the clearest indication that a superstar had been born inside the ropes of Superclásico. Boca thrashed River 3-0, with Maradona collecting a superb hat-trick. One of those goals remains to this day a masterpiece and a cherished memory amongst Boca supporters.

Channelling his unrequited mastery of the ball, Maradona received the ball inside his own half and pierced the River team down the middle of the pitch, outwitting legendary players such as Daniel Passarella – the captain of Argentina’s 1978 World Cup triumph – and Américo Gallego along the way. Bearing down on goal facing off with international goalkeeper, Ubaldo Fillol, Maradona feigned to shoot, leaving his adversary scrambling on the floor desperately. Just as he was rounding the keeper, the defender Alberto Tarantini had busted his lungs in getting back to guard the exposed net. Misreading Maradona’s immediate intentions, he too dove to block the ball, condemning him to the role of helpless spectator as Maradona side-stepped him and finished the remarkable run off. That goal, the match and the hat-trick, undisputedly announced Maradona as a king of his native country and paved the way for a lucrative transfer to Barcelona the following year.

For the opposing team, River Plate, another of the game’s utmost legends had a fleeting but highly influential time in Buenos Aires. Alfredo Di Stéfano spent the first four years of his senior career at River, inspiring them to two league championships during that spell. However, Di Stéfano’s time as the linchpin of River’s dominance was short-lived as the Argentine footballers’ strike in 1949 forced him to move to Colombia, where he played for Millonarios of Bogatá. He is still remembered fondly for his contribution to a prosperous time for River, though, and is one of the greatest examples of the club’s world-class youth academy that has continued to nurture stars and prepare them for Superclásico.

Gabriel Batistuta started his career with Newell’s Old Boys before making the leap to River Plate. A potentially career-defining move for Batigol was ruined prematurely as his apparent differences with manager Daniel Passarella forced him out of the team and in need of a new club. The team he eventually chose could not have been a bolder move as he transferred to Boca. River’s arch-rivals were Batistuta’s beloved team and moving to them was not only a dream come true, it provided him with the opportunity to exact revenge on River. With a regular run of games as the team’s main striker, under the careful management of Óscar Tabárez, Batistuta emphatically demonstrated to River what they had disposed of.

With the powerful goalscoring prowess of Batistuta, Boca had a genuine tilt at the title but came up just shy, losing to his former team Newell’s in the playoff. However, his spell at La Bombonera was a crystallising moment in the infancy of his career and Batistuta always reflects on his time there fondly, especially his relationship with Boca’s fanatical support. Batigol went onto to become of the most feared strikers in European football, forging successful careers at Fiorentina and later Roma, whom he guided to the scudetto in 2001.

However, it was his time with the clubs of the Superclásico for which he made his name and began to full realise his potential as a top-class striker. His education and hard work during his time at both River and Boca instilled in him a strength of character and unerring determination that defined his career at Fiorentina. His special relationship with the Boca fans, in particular, equipped him with the appreciation of what fans do in football, which was central to his love for them in Florence and why he opted to decline big-money moves to AC Milan and Manchester United in order to return Fiorentina to Serie A following their relegation in 1993.

River have a long-standing history of producing the finest goal-scorers in the game. Hernán Crespo learned his trade at El Monumental, following in the footsteps of the great Di Stéfano. So too did Gonzalo Higuaín, Marcelo Salas, Javier Saviola and Radamel Falcao, all four of whom fashioned productive careers in the top leagues of Europe.

It seems that the attacking emphasis in the Argentine league and the sheer iron will for either River or Boca to outscore each other produces goal-scorers of the finest ilk. Crespo, for instance, thrived in Serie A with Parma and Lazio, scoring over 100 goals within his first six years in Italy. He became renowned for his finishing and intelligent attacking runs behind the defence, giving him multiple opportunities to score. The trademark run and finish of Crespo was developed expertly in Superclásico, as his goals propelled River to four league championships and a Copa Libertadores in 1996, where Crespo scored twice in the home leg of the final. It was in his native country, for his adored River, where Crespo sharpened his skills and cultivated his reputation as a world-class number 9.

Perhaps the greatest icon of Superclásico is one of Boca’s most revered superstars, Juan Román Riquelme. The exceptionally gifted playmaker, master of the toquecitos (soft touch) and la gambeta (close control while weaving through opponents), honed his skills at his dear Boca. The “lazy magician” as he became known in his later years in Spain with Villarreal, made his name as a youngster in the 1990s, spending seven successful seasons with Boca from 1996.

Riquelme is a Xeneizes legend, largely thanks to his glittering displays against River. He has six goals to his name in Superclásico matches, three of which came over two legs in the Copa Libertadores quarter-final in 2000. Boca went on to claim the trophy, beating the Brazilians Palmeiras in the final – their third Libertadores triumph. The fans affectionately recall Riquelme’s influence and inspiration in the two legs against River and he is forever sacrosanct in Boca’s history for his role in overcoming River. He famously returned to Boca and scored a stunning free-kick in April 2014, rolling back the years in Superclásico but just failing to inspire Boca enough as they lost 2-1 to Los Millonarios.

It will always be a match that incites an explosive hatred between the fans and brings out the most passionate moments in the players. Carlos Tevez, for instance, perhaps took it a touch too far when he scored in a 2004 Copa Libertadores match and celebrated with a chicken dance, mocking River’s so-called reputation for choking it in big matches. Tevez was sent off for deliberately sparking violence and later apologised, but he is yet another superstar to make his name in football’s most ferocious rivalry.

The match will always produce superstars and heroes; like no other, it is a rivalry that provides the greatest platform for potential stars to make their name in Argentine football and announce themselves to the wider world