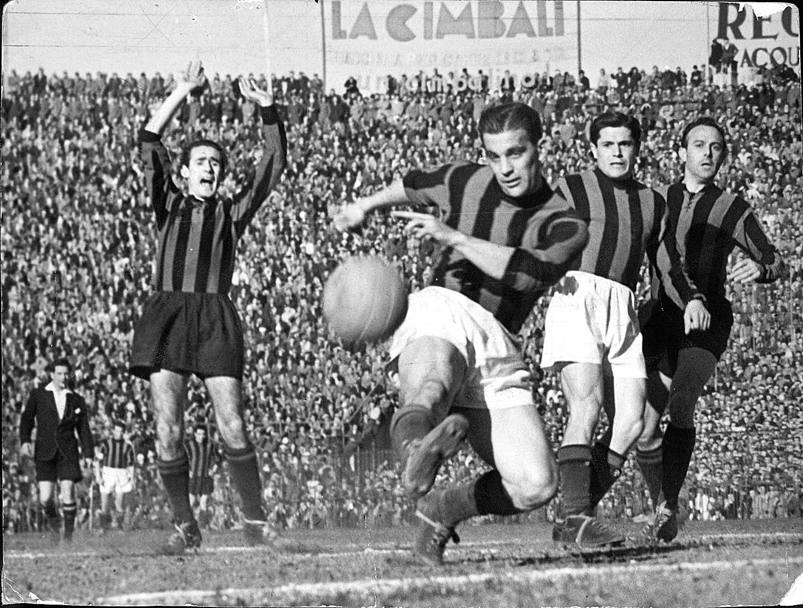 WITH 2017 MARKING 25 YEARS since Francesco Totti first graced Serie A, much of the global attention the division receives has been directed towards the Roma legend’s extraordinary career, and rightly so. Over 750 appearances and more than 300 goals, all for the Giallorossi, is a remarkable achievement, and one which is made all the more incredible by the fact that for most of those matches, he was deployed in a trequartista role associated more with creating goals than scoring them.

In scoring his 226th goal against Parma, Totti became the second most prolific goalscorer in the history of Serie A, and in doing so overtook Gunnar Nordahl, a Milan legend whose own achievements are often overlooked in Serie A’s unique and often chequered history.

By 1949, Serie A was one of the pioneers for the top divisions of football’s modern era, with home-grown talent complimented by foreign stars from as far afield as Uruguay and Argentina to the west, and Hungary’s Magic Magyars to the east. The influence of these players upon the Italian game was profound, without being critical to the development of the professional game in Italy.

While Uruguayan Ettore Puricelli was top-scorer in the 1939 and 1941 seasons, and Hungarian superstar István Nyers scored 133 goals in six years at Internazionale, foreign talents struggled to stand out amongst some of the greatest players Italy will ever produce, from Giuseppe Meazza in the 1930s to Valentino Mazzola (who tragically perished in the Superga Air Disaster of May 1949) and the great Silvio Piola in the 1940s. But after scouting the 1948 Olympics in London, Milan made the decision to offer a player from a small, amateur club in Sweden the chance to write a groundbreaking new chapter in the history of Italian football, and turn Serie A into a truly international affair.

The man in question, Gunnar Nordahl, was nothing if not a pioneer. After securing Sweden the gold medal at the Olympics, finishing as the tournament’s top scorer with seven goals, Nordahl made the decision to take his considerable talents to the professional game. This meant that Nordahl’s international career would come to a premature end due to Sweden’s policy of only fielding amateur players, but not after 43 goals in 33 games representing his country, a tally which would make him Sweden’s second most prolific goal-scorer in the history of the national team.

By joining Milan on 22 January 1949, Nordahl became the first Swedish player to depart his home nation to play in a foreign league. Nordahl came to Milan as a relatively unknown entity. Despite his prolific scoring record, it was not known whether or not Nordahl’s form as an amateur would translate to goals in arguably Europe’s most competitive division. By the end of the 1948-49 season, no doubts remained about his credentials. Nordahl scored 16 goals in 15 games in a Milan shirt, with his refined touch combined with formidable size and deadly finishing with both feet seeing fans of the Rossoneri dub him ‘Il Cannoniere’ (The Gunner) or ‘Il Bistone’ (The Bison).

Nordahl’s stunning form led to Milan handing him a new two-year contract, and prompted them to move for two of Nordahl’s most influential international team-mates, fellow forward Gunnar Gren, and creative midfielder Nils Liedholm. Together, they were known as ‘Gre-No-Li’, and would form the spine of a Milan side that would win the Scudetto in 1951, while Liedholm and Nordahl would repeat the trick in 1955 after Gren’s departure to Fiorentina.

Despite the enormous influence of Liedholm, who according to legend went two years before misplacing a pass at the San Siro, and to a lesser extent Gren, it was Nordahl’s astonishing goal-scoring exploits which would grab the headlines for Gre-No-Li. In 257 appearances for Milan, Nordahl scored 210 goals, and secured the title of Capocannoniere, handed to Serie A’s top goalscorer, a record five times in the six-and-a-half seasons he spent at the San Siro.

By the time Nordahl departed Italian football in 1958, he had scored 225 goals in 291 matches, with a goals-to-games ratio of 0.77, which is unmatched to this day. Nordahl’s unprecedented success in Serie A had already set in motion a huge influx of foreign players into Serie A, as clubs searched for the next foreign superstar, and players headed to Italy in search of a lucrative new playing contract, with Italy then competing with Spain in offering the biggest pay packages in football.

In 1957, legendary Welsh striker John Charles, a player very much in the Nordahl mould, joined Juventus from Leeds United in a deal which saw Charles become one of the first British players to play his trade overseas and become the league’s top goalscorer in his first season for the Bianconeri. Indeed, following Nordahl’s arrival in 1949, the title of Capocannoniere went to a non-Italian native in 14 of the next 16 seasons, albeit in an era of Italian football scarred by the May 1949 Superga disaster, which claimed the lives of many of Italy’s finest young talents.

Following Nordahl’s pioneering generation, a plethora of great foreign talents have made their name in Serie A. Michel Platini claimed three consecutive Capocannoniere and Ballon d’Or titles while wearing the black and white of Juventus, while the likes of Marco van Basten, Ruud Gullit, Zlatan Ibrahimović and the great Diego Maradona all enjoyed arguably the best seasons of their career while playing in Italy’s top division, and it could be said that they all owe a debt of gratitude to Nordahl’s astonishing exploits.

So as his mark of 225 goals is passed by Roma’s favourite son, remember a man whose prodigious talents cut a path for international superstars to head to Italy, and in turn helped set the wheels in motion towards football becoming a truly global phenomenon.