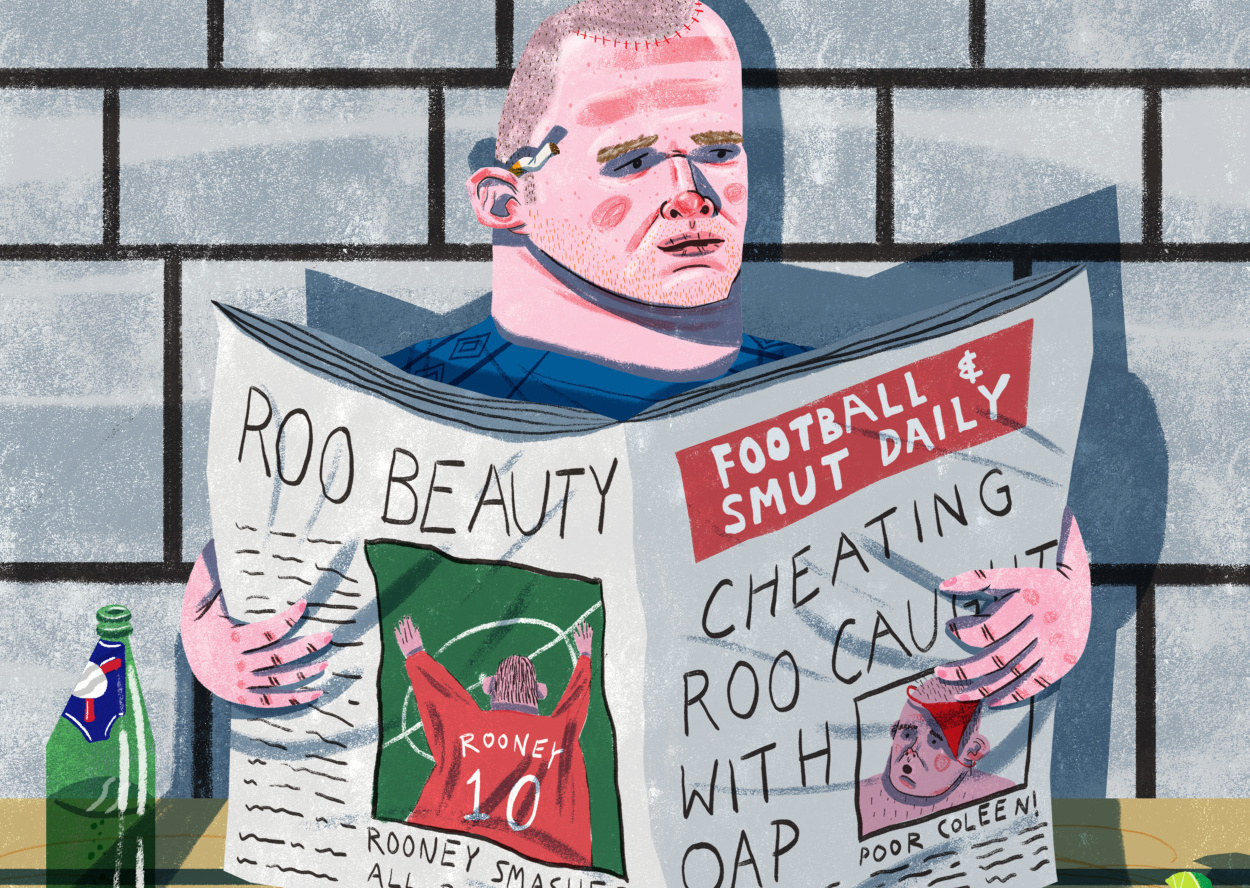 While many football-loving artists are preoccupied with showing only the glitz and the glamour of life on and off the pitch, capturing a player’s good side and playing up to their polished reputations, illustrator Daryl Rainbow is one who remains perfectly content to buck that trend at every opportunity.

Far more aroused by the anarchy the sport often inspires, and the foibles of those at its centre, who find themselves inexplicably catapulted into stardom despite being wholly unprepared for such a role, Daryl’s work seeks not to represent the players as stars but remind us all that the stars are always only human.

Daryl recently chatted to These Football Times to discuss the origins of his keenly recognisable art style, why he focuses on the facets of football so many of his contemporaries seek to shun, the players that most stand out from his childhood of falling in love with the game, and much more. 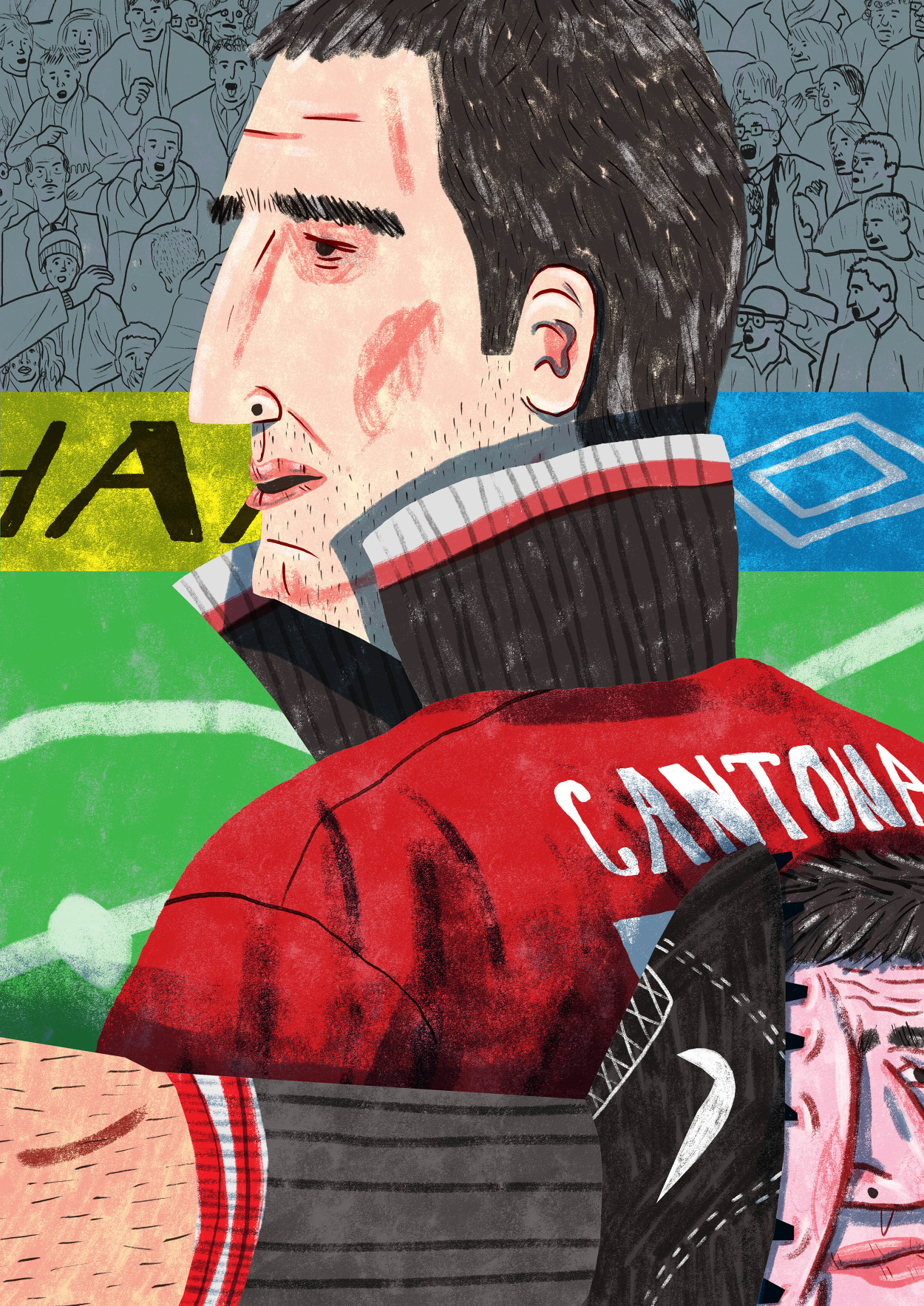 What are your earliest memories of football and do you believe these memories inspired you to draw the game in the way you do today?

“My earliest memories of football are of the great late-90s Arsenal team. I loved the rivalry between Arsenal and Manchester United; the fights between Vieira and Keane. I remember the intensity of those matches, being excited throughout the week waiting for the match on Saturday. As I child I remember being fascinated by those games, but at the same time having massive anxiety watching it.

“I think what made me fall in love with the Premier League was the brilliant characters each team had back then, it was like Eastenders to me. Each club had so many great personalities; from the inspirational captains to the elegant flair players, to the bruising hard men. And they all had their flaws, which I think is why they were so interesting. They were well-rounded characters, with their own demons, rather than the sort of two-dimensional, slightly dull, perfect role model footballers you have in the Premier League now.

“I suppose those memories have helped shape my work in the way that I’m more interested in the personality of footballers.” 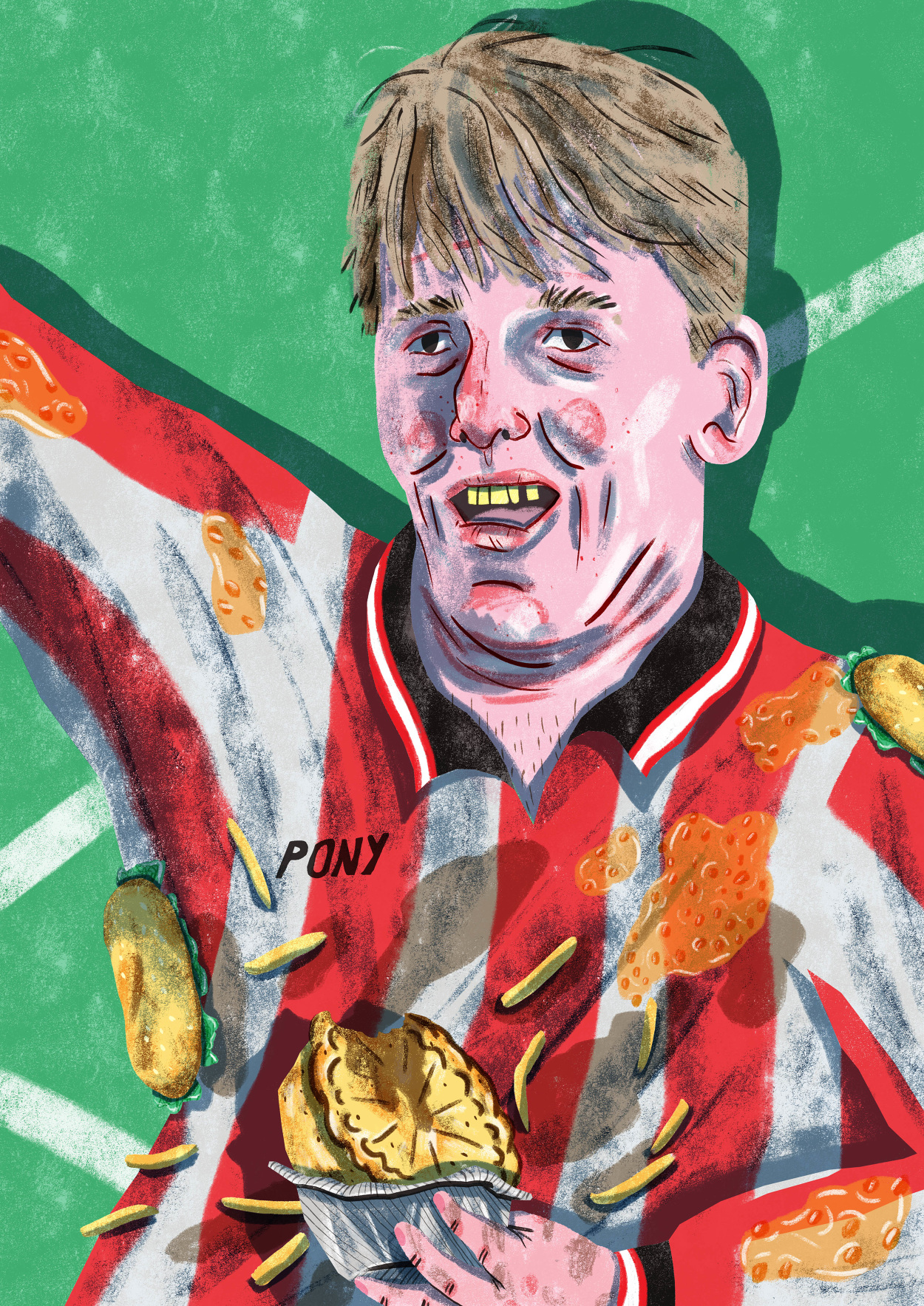 In addition to being, at times, a little caricaturish, I hope you’d agree your style presents players in a way that is cruder and rather less polished than many illustrators seek to. Is this in any way a representation of your opinion on football – a case of you drawing players the way you view them – or is it more just the natural result of the subject matter colliding with your own style of drawing?

“I suppose with my work, outside of the football illustrations, I’ve always been interested in flawed characters and situations and I guess that also shows with my football illustration. The flawed characters always have more engaging personalities. Whether they be the hot-heads, cheaters, the prima donnas or the players suffering from addictions.

“Those characters generally make a better illustration for me. There’s more to play with in terms of creating an illustration of the player. It’s more fun to illustrate someone where you’re trying to highlight their personal flaws, rather than say just doing a straight-up portrait from an iconic photograph, for me anyway.” 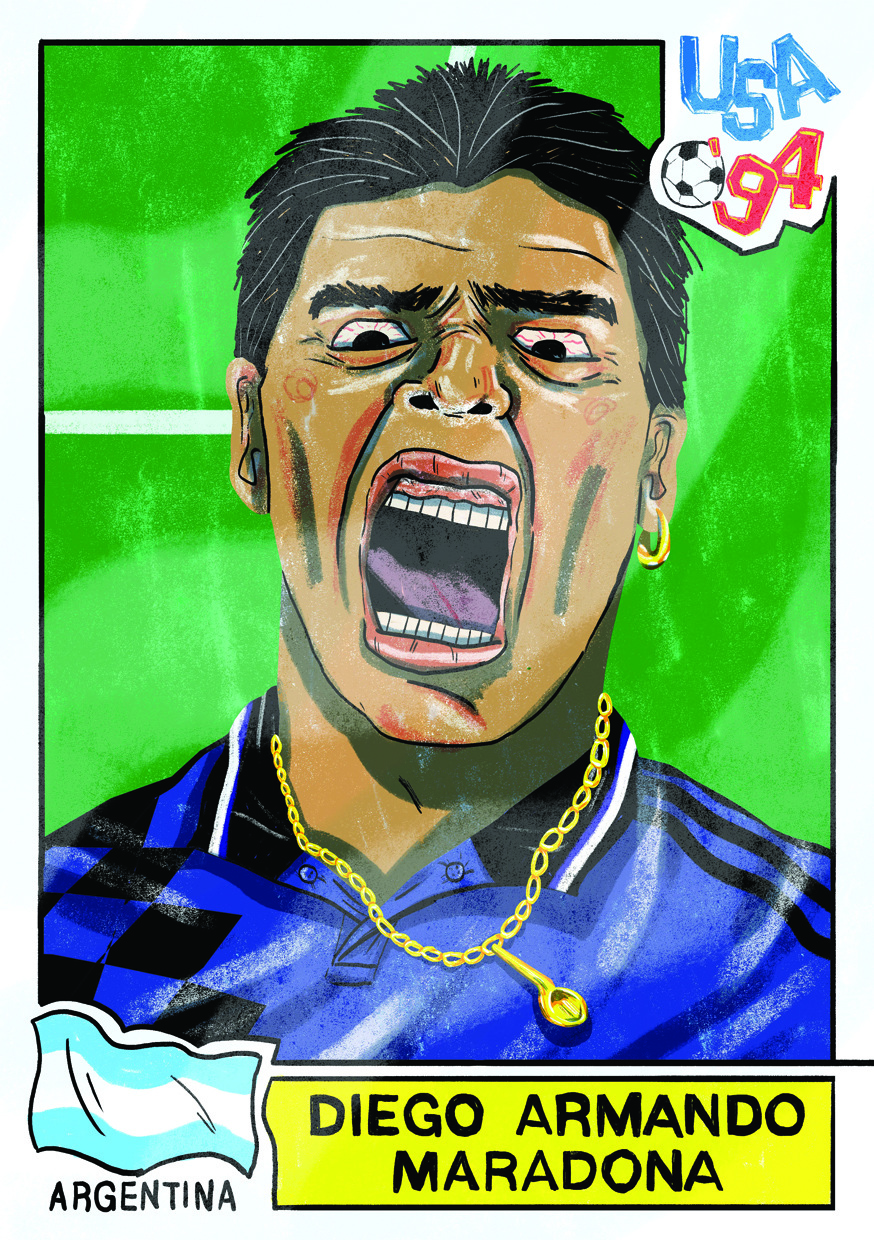 Beyond the everyday actions of a football game, your drawings tend to take on a wider narrative quality and depict players performing actions for which they eventually became famous or, as is often the case, infamous off the pitch. Is this intentional and if so why? What makes those moments more memorable in your eyes?

“Focusing on the slightly negative side of the footballers, I suppose, is intentional. I think those big controversies in the game – from Zidane’s headbutt to Rivaldo’s dive, to the addictions of the 90s Arsenal players – are just as important as a magnificent volley that wins a final. I think those controversies make people fall in love the game just as much if not more than the glorious moments. People remember and talk about those moments just as much.

“In a way, I wanted to make illustrations that celebrate those moments where people saw that these footballers, who are celebrated and worshipped as almost biblical figures, are human and make mistakes. People connect with Maradona more because of his drug addictions, because he’s outspoken and wears his heart on his sleeve. More so than, say, Messi, who’s quiet and shy and seems to be the perfect role model. Apart from his tax evasion habits, of course.” 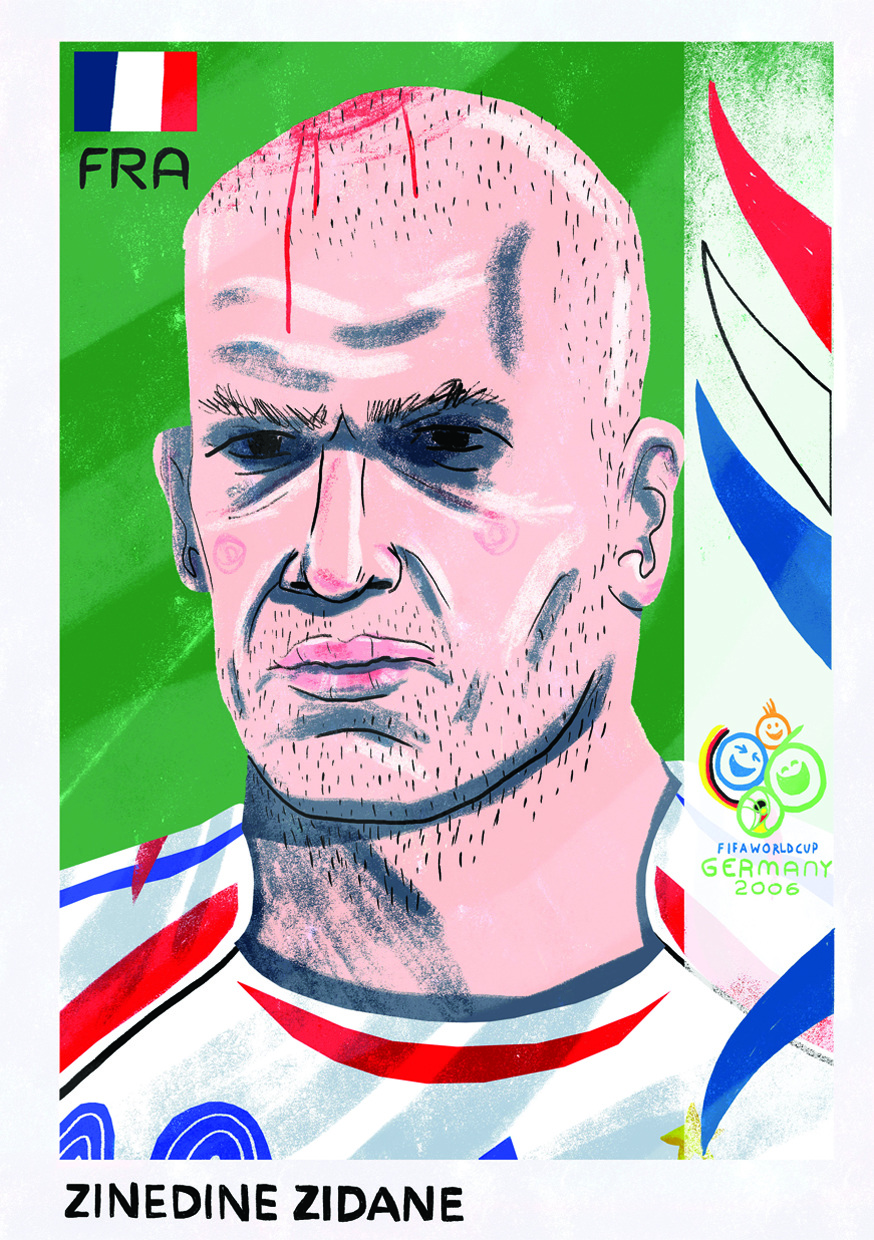 What do you usually look for in a subject or a scene to draw? Furthermore, who is your favourite footballer to draw?

“I normally like making illustrations with a little joke or a narrative in mind. It gives me more to play with in terms of what I can draw in the image. I try to sneak a bottle of booze or some sort of alcohol in the illustration. They’re normally quite fun to draw. My favourite footballer to draw was a Wayne Rooney commission I did. That was fun because there are so many controversies with him to grab onto. I couldn’t fit them all in one image. You could do a whole book on Rooney.”

What are your ambitions for this season? What would be your dream commission?

“I hope there are more controversies in the league, that’ll keep me busy! Ambitions? I suppose to continue getting regular work, maybe join an agency at some point. I’d love to do some work for The Guardian’s sports pages. They always have great football editorials. I love David Squires’ comic strips, they’re always so hilarious and on the money.”

Thanks to Daryl Rainbow for speaking to These Football Times as part of The Gallery. If you’re an artist for whom football remains the ultimate muse, and you’d like to feature in The Gallery, please email us with examples of your work.