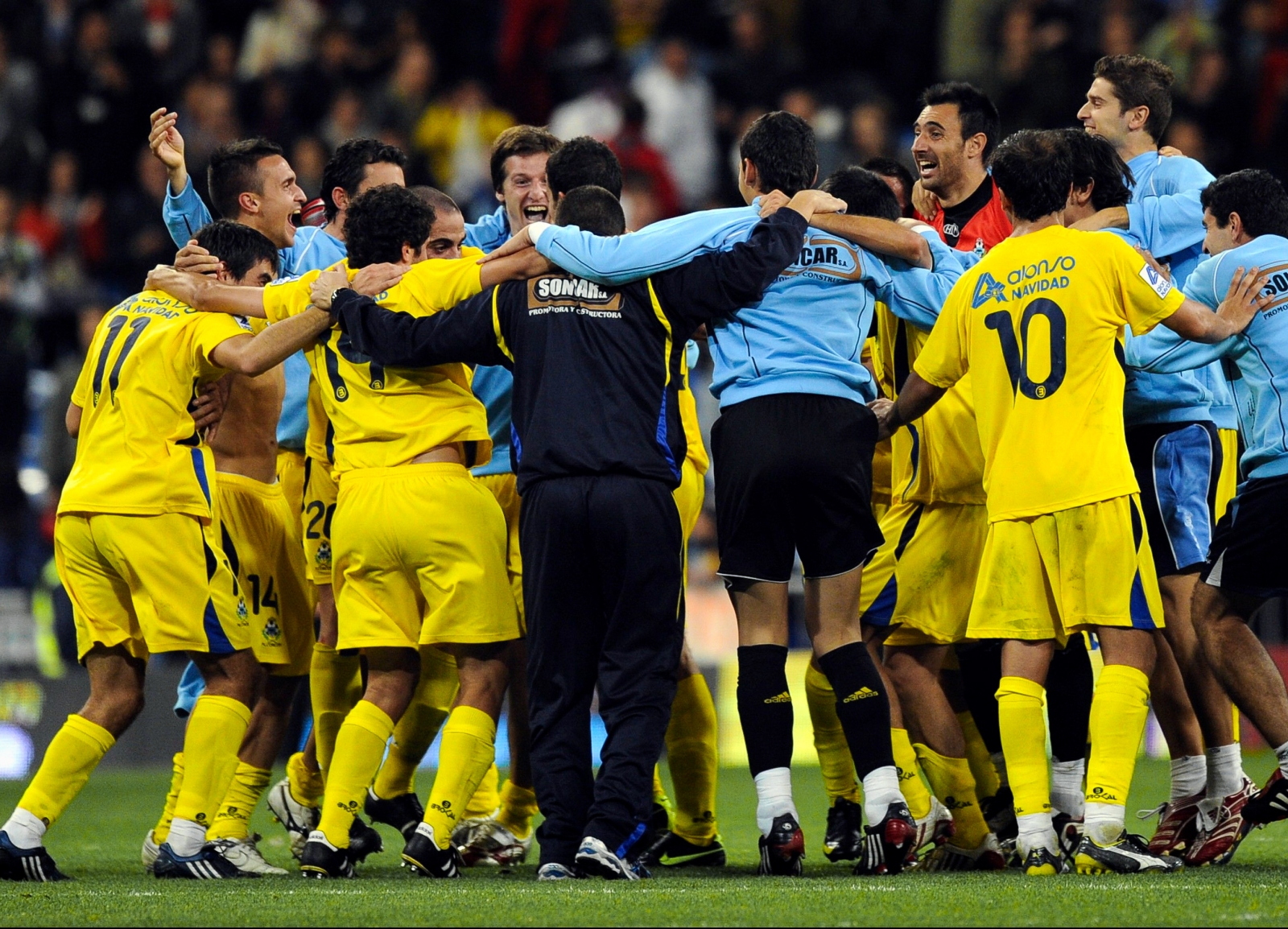 Cup competitions can throw up the unlikeliest of footballing match-ups and, sometimes, the craziest of results. The smallest clubs can go global overnight while the superpowers of the game can be reduced to the subsequent rubble that follows a defeat.

In 2009, Manuel Pellegrini took his Real Madrid side to their lowly neighbours Alcorcón in the hope and expectation of progressing to the Copa del Rey round of 16. What the third tier club produced next would go down as one of the most shocking results in Spanish football history.

The small city of Alcorcón is situated approximately 20km south-west of the Santiago Bernabéu and is home to just over 150,000 people. The area is known locally for its archaeological assets, boasting high-quality clay that the residents used to work into jugs and pots. The industry was the main source of income for Alcorcón and features prominently on the city’s coat of arms.

Their clay business was present centuries before a football club was founded in 1971. Agrupación Deportivo Alcorcón spent their first three decades in Spain’s regional divisions, occasionally scraping into the Copa del Rey first or second rounds. A historic promotion in 2000 catapulted them up to the third tier for the first time, where facing Real Madrid’s B team, Castilla, went from a dream to a reality.

Little did little Alcorcón know that those games against Castilla in front of just hundreds of spectators would be dress rehearsals for what would come at the end of the first decade of the 21st century. While Alcorcón were quietly making their way in the early 2000s, Real Madrid assembled a team of superstars capable of taking on any team in the world.

Zinedine Zidane’s stunning volley brought them their ninth Champions League trophy in 2002 before three LaLiga titles followed by 2008. A year later they made Cristiano Ronaldo the most expensive player in football history, breaking the record they had set earlier that summer for Kaká. World record transfers and trophies were normal for Real Madrid. Normal for Alcorcón, however, was a mid-table finish in the Segunda B.

Alcorcón were denied promotion to Spain’s second tier in the 2008/09 season after a devastating defeat to Irun in the playoff final. That disappointment was soon forgotten as they reached the third round of the Copa del Rey for just the second time in their history courtesy of a 2-0 win against Palencia. 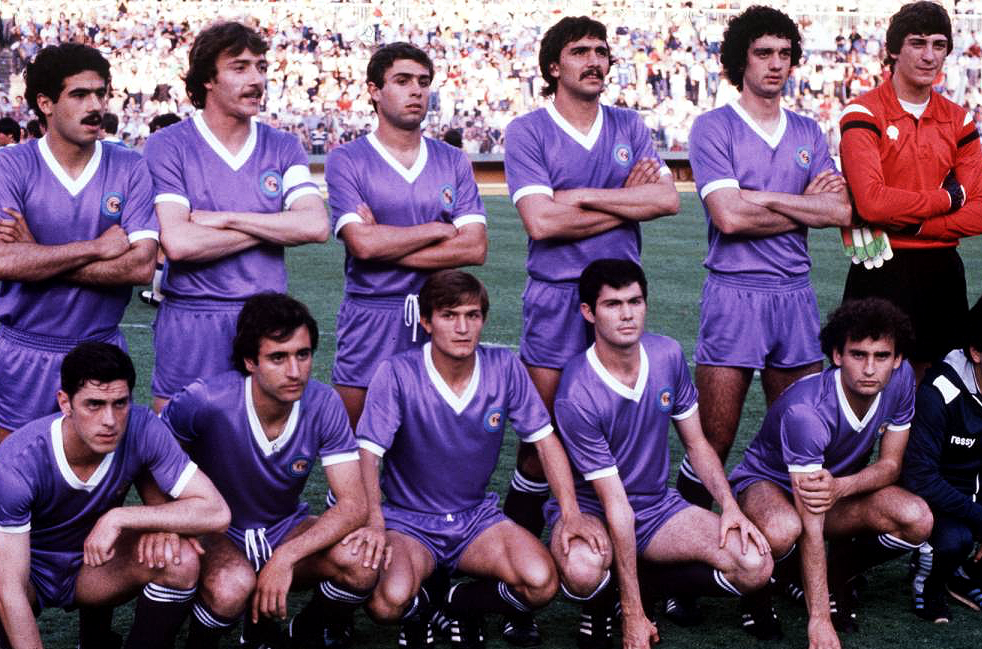 Los Alfareros came from behind at Lagun Onak to progress into the round of 32 and win a chance to go up against the heavyweights of Spanish football. Having not faced a club from Spain’s top-flight before, Alcorcón were drawn against Real Madrid in the best possible outcome for the club, at least financially. On the sporting side, the draw spelt inevitable elimination.

The cup’s rules changed the dynamic of the competition after the third round. Instead of the standard single knockout game, the tie would be spread across two legs. That meant that Real Madrid would visit the Estadio Santo Domingo, a ground that held just 3,000 people, and they’d go there for the first leg.

The stadium’s capacity was increased to 4,000 by using temporary seating, giving no room for manoeuvre once you were sat in your seat. The old-fashioned stands were steep and close to the pitch, creating a unique atmosphere, with fans feeling as though they were involved with every shot and tackle.

Whether it was naivety or complacency, Manuel Pellegrini opted to field some of Los Blancos’ fringe players but kept an experienced attack in place. Álvaro Arbeloa, Guti, Raúl and Karim Benzema all walked out in front of an exhilarated home crowd as starters, while Champions League winner Jerzy Dudek was deployed between the sticks. Cristiano Ronaldo and Kaká missed the game through injury while Iker Casillas was rested.

As it often is with lower league clubs, Alcorcón’s line-up included those who hadn’t made it at the top clubs. Defender Borja Gómez, midfielder Ernesto and striker Borja Pérez had all spent a part of their footballing upbringing at Real Madrid, while goalkeeper Juanma and defender Nagore used to bare the badge of Atlético. Esteban Granero started in midfield for the visitors and greeted some of his former teammates and friends in yellow with a smile.

Nothing was friendly about the way the home side started the game. They didn’t seem overawed or star-struck – they wanted to win. Dudek was called into action early on when two shots from distance came his way. If his team was caught off guard by Alcorcón’s fast start, he certainly wasn’t, parrying the first behind for a corner before tipping a looping effort over the bar.

Real Madrid’s former youth player dealt the first blow after 16 minutes. Borja collected the ball on the edge of the area, shifted it past Mahamadou Diarra, and slotted it into the far corner. Those in the seated areas were on their feet as the whole ground shook with euphoria. They had waited 28 years for this and were going to celebrate it as best they could.

The expectation for Pellegrini’s side to gain control of the tie and cruise past their lower league opponents still stood strong but, in the eyes of the home crowd, they now believed. Just six minutes later, Sergio Mora was found in space on the right of the Real area. The former Benidorm and Alcoyano midfielder fizzed a low cross across goal and a desperate Arbeloa managed to stab it past Dudek and into his own net.

While the jubilation spread in the stands, those watching in the dugouts could barely believe it. Juan Antonio Anquela had seen his team go 2-0 up against the nine-time European champions as Pellegrini sat, stony-faced, wishing the ground would swallow him up. Florentino Pérez’s beady eyes were forming an almighty shadow in the directors’ box. It was about to get a lot worse.

Juanma kept out Granero and Rafael van der Vaart before Alcorcón struck the post at the other end. Six minutes before half-time, Diego Cascón raced into the area, picked his head up and spotted Ernesto, despite the minute size of the pitch, in acres of space on the left. Cascón slid the ball over to the former Real youth player who picked out the bottom corner to take Alcorcón’s extraordinary lead to three. The referee blew his whistle to give everyone 15 minutes to pause and think; to consider that they were witnessing history unfold.

Reports of a bust-up between Pellegrini and Guti emerged after the game and were first signalled by a half-time change that saw Guti replaced by Fernando Gago. Pellegrini’s substitution couldn’t halt his team’s crazy capitulation as Borja added a fourth shortly after the restart. A wide free-kick resulted in carnage in Dudek’s area, ending with Borja stroking the ball past him and finding the net for his second and, just maybe, putting Alcorón out of sight.

While one man went off celebrating, another wiped his brow in the stands. Even with a four-goal lead, a clean sheet was vital in giving Alcorcón any chance of progressing over two legs. Marcelo and Ruud van Nistelrooy, who had watched their teammates fall apart from the bench, were thrust into the action. 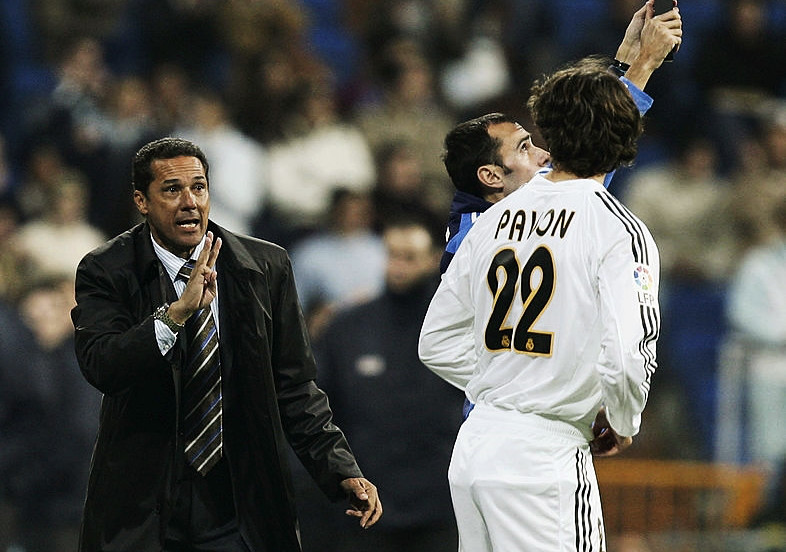 The latter tested Juanma shortly after his introduction, bringing a save from the former Atlético man at his near post. A strong right glove pushed away another Van Nistelrooy strike as the former Manchester United forward, in a state of shock, couldn’t find the net. Suddenly, the mood had changed in the Alcorcón team. They’d gone from producing attacking brilliance to defending their own goal with a mix of bravery and desperation.

They managed to preserve their lead through an array of blocks, tackles and clearances before the referee blew his whistle to bring an end to Real Madrid’s darkest hour. The home faithful, whose excitement couldn’t be contained, flooded the pitch and not only mobbed their heroes, but also the stars they’d watched week in, week out on the television, still with an element of disbelief.

While the post-mortems were being written at the Bernabéu the next day, the people of Alcorcón still had their heads in the clouds. Their feet had barely touched the ground by the time they visited Real Madrid’s famous stadium two weeks later. While Ronaldo was still suffering from injury, the likes of Pepe, Kaká and Gonzalo Higuaín came into the side as Real looked to overturn the substantial deficit.

A turnaround here would have been less of a shock than Alcorcón’s home hammering. Juanma proved to be the hero for the visitors as his saves, with the help of the woodwork, kept Real Madrid’s household names out until the 81st minute. Van der Vaart managed to squeeze a shot past Juanma but it turned out to be just a consolation as Alcorcón held firm to claim the greatest result in their history.

And so, the little club on the hill had toppled the giants from the valley below. Since that famous night, Alcorcón have made their inaugural step into the Segunda División and expanded the Santo Domingo to house 7,000 spectators. Real Madrid are now 13-time European champions having enjoyed one of the most fruitful silverware spells in club football history.

However, no matter how full your trophy cabinet is, some scars run deeper. In the aftermath of that damaging defeat, Florentino Pérez will have had sleepless nights. Since then, he has worked tirelessly to ensure nothing like that ever happens again so. He expelled complacency from the walls of the Bernabéu and installed a work-ethic that has exceeded all else. In the end, it seems, it worked out well for all.