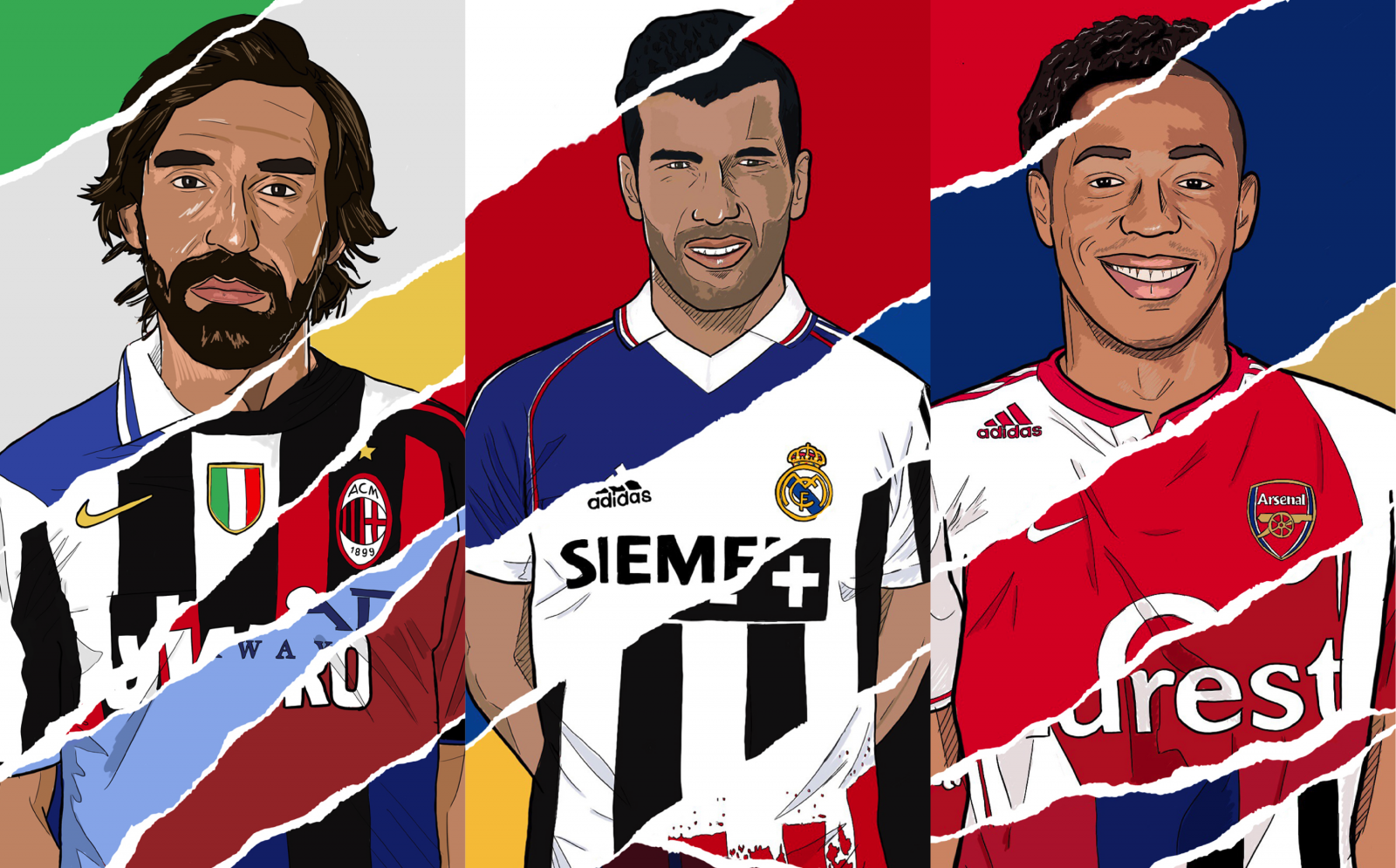 British illustrator and graphic designer Mark Johnson certainly knows a thing or two about harnessing the nostalgia of vintage kits and iconic players from classic eras of football, all in the name of creating beautiful art. With his two most captivating projects, made in ode to beloved kits and unforgettable players, including Beckham, Baggio, Henry, Ronaldo and Zidane to name just a few, Mark caught the eye of thousands, including clients BBC’s Match of the Day magazine, BT Sport, New Balance and JD Sports.

Mark recently sat down to talk to These Football Times about his own history in the game, his favourite pieces to date, his art-making and kit-selecting process, and his future aspirations.

What are your earliest memories of football and do you feel they had any impact on your pursuit of a career in art? Do you think these memories influence your style?

“When growing up, if there was football on the TV I would be watching it. English, Italian, Spanish, even Argentinian. Watching the likes of Alessandro Del Piero, Ryan Giggs, Juan Román Riquelme, Andrés D’Alessandro – I just loved it! When I wasn’t watching football I would be playing down the park with my mates. As a young player I progressed to academy level with Stoke City, where I played for five years, but unfortunately I didn’t make the final cut. 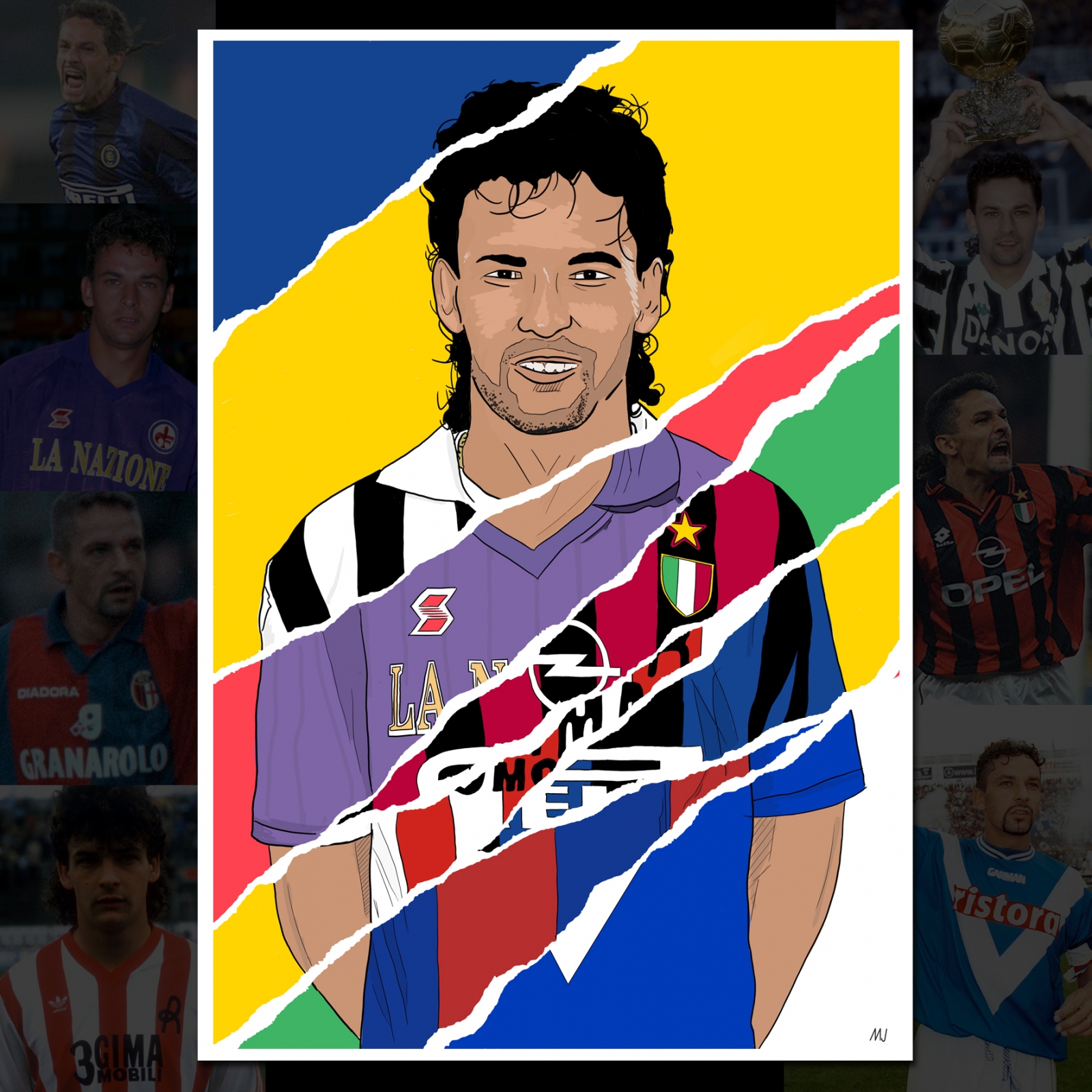 “It must have had some impact as I have always drawn players or boots throughout my life, it’s just what I love to do. My style has developed over the last two years in particular as I really wanted to do something a bit different to all the other football illustrators out there; to stand out from the rest.”

Do you remember the very first art project you ever produced? Would your school teachers or classmates be surprised to know you’re a professional artist?

“I’ve never really seen myself as a professional artist, it’s just a hobby that has grown over the years and I have recently become rather more noticed for it through the power of social media. I do reckon they would expect me to be doing something sport or art related as that’s what I was always good at in school.

“In my GCSE final art exam, we had 10 hours to create anything we wanted so I produced an A1 illustration of my three sporting heroes at the time. Ryan Giggs, Tiger Woods and another athlete, I actually can’t remember exactly who, with words in different typefaces behind them to reflect each emotion.” 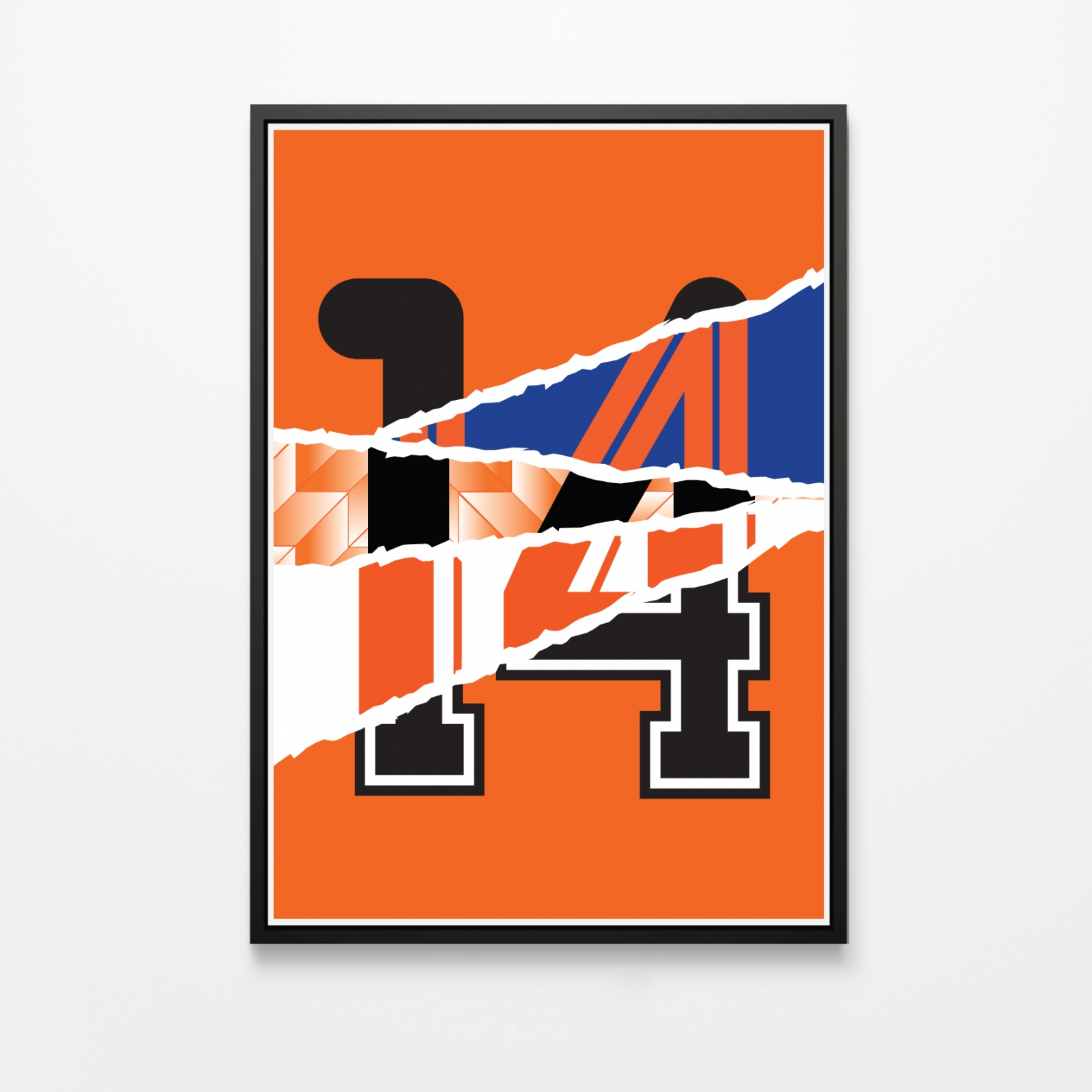 Of all your projects it seems to have been your torn paper collages depicting famous players, as well as famous shirts and numbers, from a combination of bygone eras that have proved most popular. Where did the idea come from for these particular projects and what do you think it is about them that people enjoy?

“After creating the half and half shirts and the start of my Classic Shirt Patterns x Typographic Numbers, I wanted to do something along those lines but with football player illustrations. I entered a competition for So Foot to produce an illustration of Neymar in celebration of his world record transfer from Barcelona to PSG, and this was one of my ideas.

“In the end I didn’t use but I wished I had after the response it received on social media. Since then I have decided to run with it and the guys at Classic Football Shirts have kindly made a habit of posting them online which has helped to spread my art worldwide.” 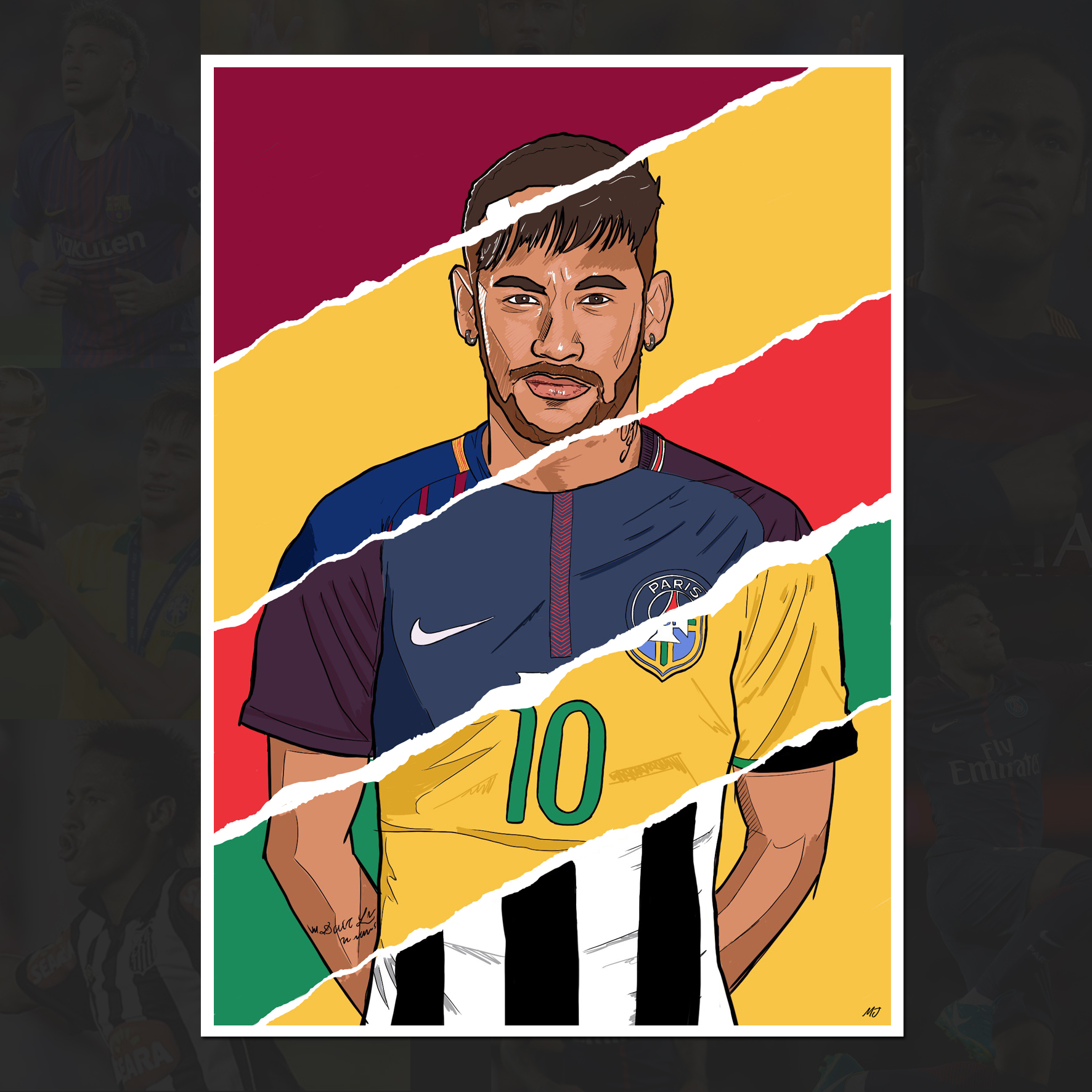 Throughout both of your most prolific series we’re treated to a great deal of vintage typography, patterns and design; throwbacks to classic kits from yesteryear. How do you go about choosing which shirts or, in the case of the players, which particular seasons to pull from? What matters more: the kit’s aesthetic or its on-field legacy?

“I try to simply pick out the most iconic kits worn by every team’s most famous players but sometimes you have to change it slightly to make the design work well together with the contrasting colours and patterns. An example of this would be the ‘United 7’ shirt. The number seven shirt is so iconic to Manchester United, with the likes of Best, Beckham, Cantona and Robson, so I picked some of each of their famous shirts to create the artwork.

“For my recent World Cup series I teamed up with Classic Football Shirts. It made for a trickier process as I wanted to use the big name players that everybody remembers from past tournaments and I could only use World Cup shirts. I made a list of the players I wanted to feature but some you had three or four shirts to work from while others presented you with just one or two. I personally think the final piece looks better the crazier the pattern on offer, like the 1990 ‘Gazza 19’ design but, of course, a player’s on-field legacy is a huge help when it comes to the designs and remembering those iconic moments.” 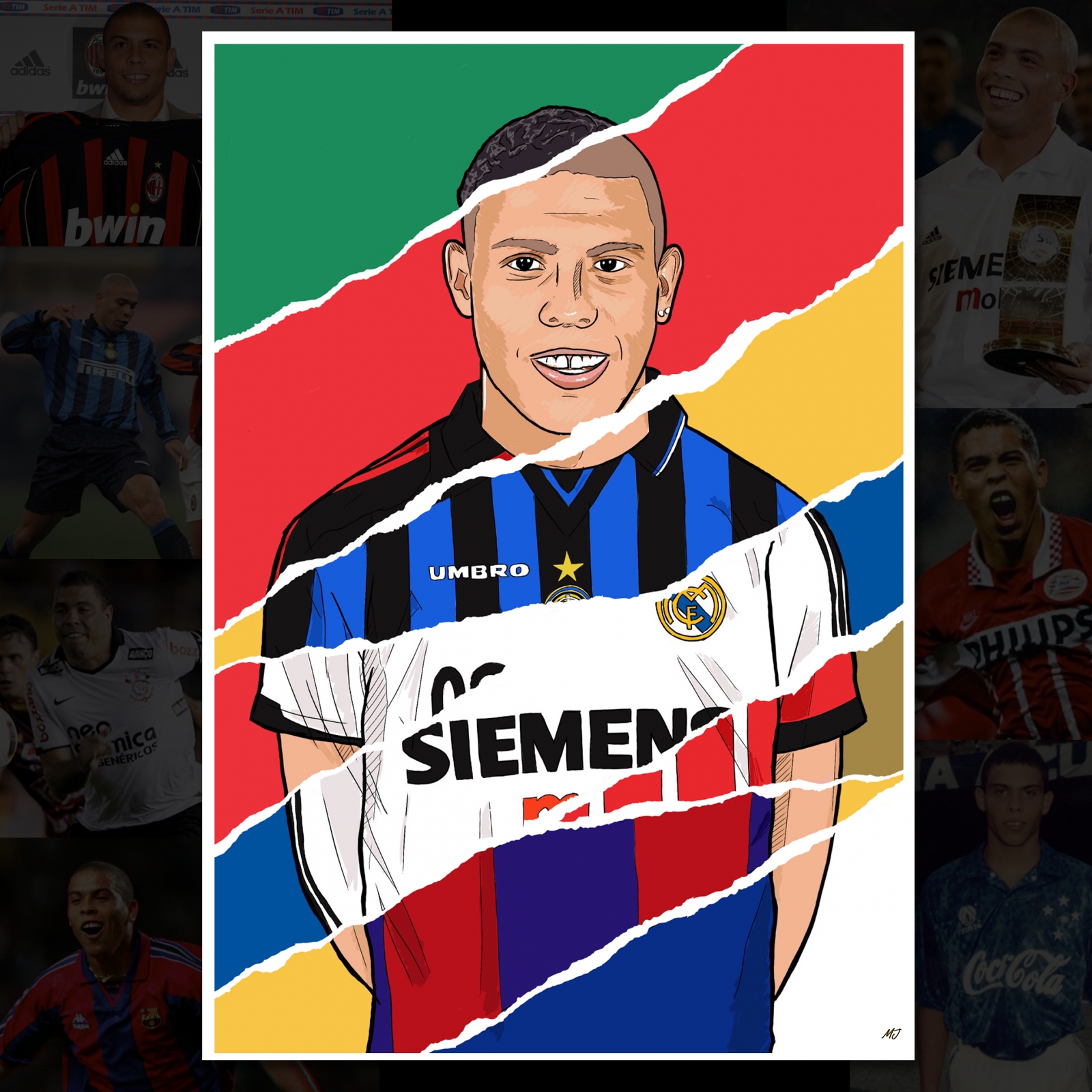 Do you have a  favourite piece that you particularly enjoyed creating or simply felt you did an especially good job with?

“I’d go with my retro gaming illustration of ‘Dr Kloppnik’ for the Champions League final. It wasn’t for any particular client, it was just a crazy idea that came into my head leading up to the final. I’d seen on social media guys like DanxDraws incorporate retro gaming into their work and thought I would give it a go in my own style.

“When growing up my first console was a Sega Megadrive and Sonic the Hedgehog was one of the games to have. I found that, bizarrely, putting Sonic and the Champions League final together worked really well. Dr Robotnik, the bad guy, trying to defeat Sonic in spite of his crazy speed and agility, jumping over incoming objects, and the classic wink on the loading screen. In my head, it all matched perfectly to Jürgen Klopp and Cristiano Ronaldo and I think the final art worked too.” 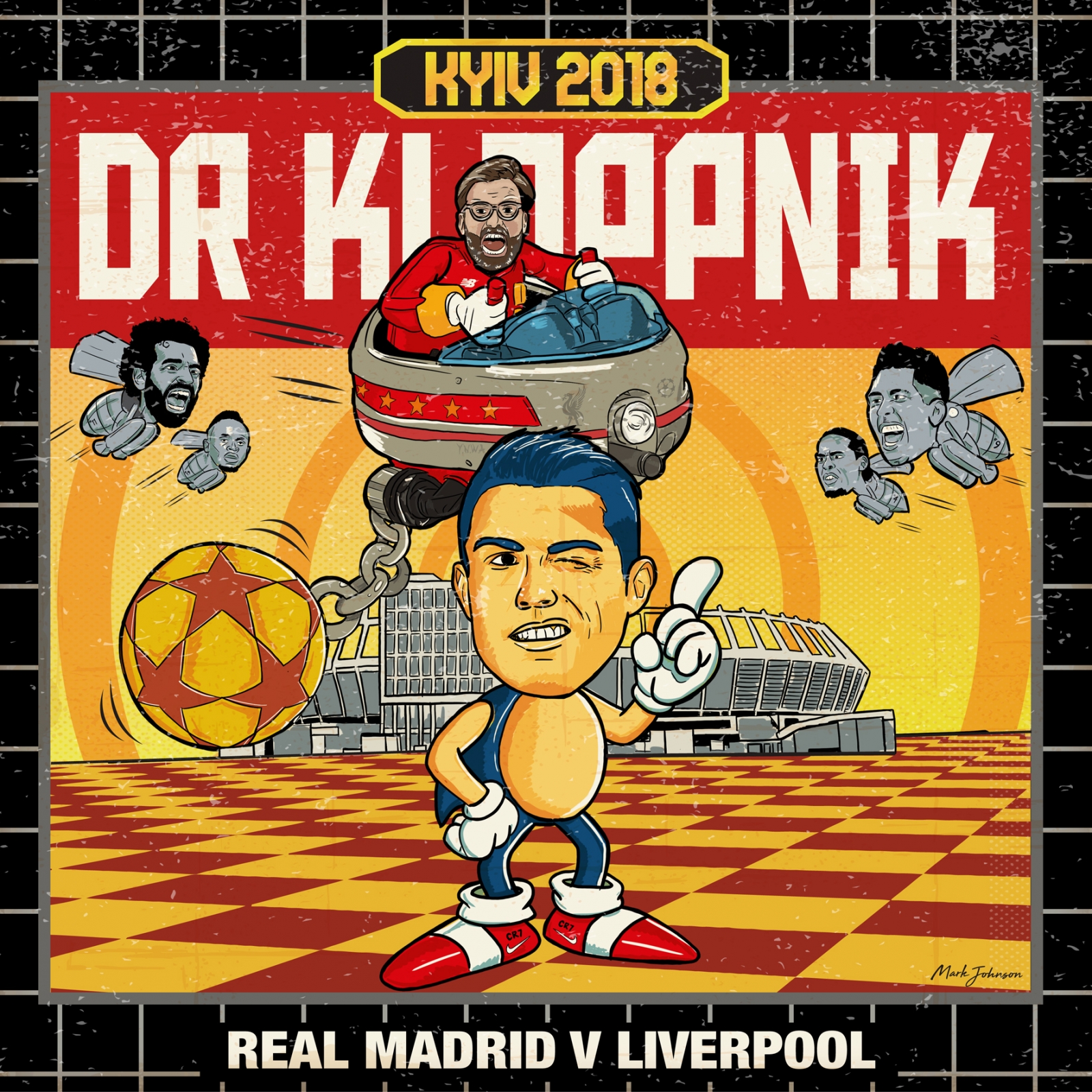 What would you say has been the highlight of your career to date? What would be your dream job, project or collaboration?

“My highlight would be my Arsenal vs Chelsea FA Cup double page spread in Match of the Day magazine. It was my first big client job, my first real chance to get my name out there in the illustration world. It felt like all the hard work I had put into drawing different players had finally paid off and I had my chance to show what I had to offer. I always loved getting all sorts of football magazines when I was younger, and sticking my favourite players on my bedroom wall, so featuring in a football magazine was huge for me.

“My dream job would be, like most football illustrators out there, I bet, to collaborate with the big sporting brands like Nike and Adidas. Whatever I do or achieve, whoever I’m able to work with throughout my career, those will always be on my list of goals to achieve.”

Do you have any cool projects in the works or series we should be looking out for?

“My latest collection. Premiership Legends, inspired by 20 of the most famous players to have graced the Premiership over the years, is on its way. For this one, I discussed with the lads at Art of Football a plan to reach out to a range of different photographers to take this project to the next level and really bring it to life. Over the coming weeks, Phil Martin, Richard Lister, Ross Cooke, Adam Barnsley and Romel Birch will all be kindly getting involved and featuring their skills on my social media channels, so keep your eyes peeled.”

Thanks to Mark Johnson for speaking to These Football Times as part of The Gallery. If you’re an artist for whom football remains the ultimate muse, and you’d like to feature in The Gallery, please email us with examples of your work.