Soccer really is a simple game in a complex world. The year was 2001, and I sat in my high school cafeteria with my buddies and I noticed many of the prestigious and not-so-prestigious national and regional universities had ceased their visits to our school. The flyers and pamphlets were gone as were the tables and university reps there to answer any and all questions for a clueless 17-year-old who knew just as much about the real world as he did that calculus quiz he probably bombed. Soon, in place of the university booths at the cafeteria were the branches of the United States Armed Forces.

The United States Marine Corps talked to me and my classmates, all of us willing and able to crank out pushups for a USMC t-shirt. Some of my friends took the shirt and wore it with pride. Coming from a family with strong ties to the Marines, I knew better than to accept the shirt and wear it without enlisting and serving. To do so was simply unacceptable. The Army recruiting officers spoke of providing college assistance to eager students and the Navy spoke of offering adventures of a lifetime and an opportunity to see the world. The United States Air Force spoke of new technologies geared towards the engineering students. And I sat at my lunch table watching a movement banking on the emotions of seething high school students reeling from the attacks on September 11, 2001.

Many of my friends enlisted in various branches and served proudly. At the time, the attitude was so saturated in forced patriotism that I began to feel “un-American” for accepting a college scholarship to play Division 1 soccer and not picking up a rifle and charging into battle in the impending war. So what does this all have to do with soccer? It’s simple; it has everything to do with soccer.

This past weekend, the United States celebrated the Fourth of July while the world continued to celebrate the World Cup. Most, if not all of the World Cup-based chants and fervor in the U.S. have ceased as many citizens have either tuned out or opted to support their “second pick” in the tournament. I listened to the cracks and screams of the cheap fireworks and the raucous laughter outside and I couldn’t help but recall a conversation I had with a Second Lieutenant in U.S. Marine Corps named Brandon Winslow. I met Brandon in graduate school a year and a half after his third tour of duty in Iraq. We found ourselves in a graduate-level course titled: War Poetry and Literature. At the time, I still played soccer for a few competitive teams in Chicago and he noticed an old t-shirt I wore from my playing days.

After our three hour class, he walked up to me and said, “You like soccer?” I looked at him and his thousand yard stare was as honed as ever and I nodded. He continued, “I used to play as a kid.” Again, I nodded and took stock of his unfinished tattoos that adorned his forearms along with the ropy veins that seemed to carry race fuel instead of blood to his muscles. His mandible jutted as he clenched his teeth and what he said next is something I’ll never forget and it wasn’t the first time I heard someone say these words.

“Soccer saved my goddamned life,” he said, grimacing before proffering a fake smile. I looked at him and could see he had a story to tell and I was his intended audience.

“What?” I stupidly asked in reaction. Brandon went on to tell me of his time with Regimental Combat Team 1, 3rd Battalion/1st Marines, 3rd Battalion/5th Marines and the 2nd Battalion/7th Calvary of the U.S. Army positioned themselves to assault the western half of Fallujah from the north. Brandon told me how he joined the United States Marine Corps after graduating college in 2000 and finished Officer Candidates School (OCS) and was commission as a Marine Officer and, before he knew it, found himself in his first of many battles that subsequently left him with Post Traumatic Stress Disorder (PTSD).

“After Fallujah we patrolled areas by foot in the Al Anbar province. For weeks we saw nothing but heard things…especially at night. Oftentimes, your mind wanders. One afternoon, we were tasked with patrolling a small village northeast of the city near the banks of the Euphrates River. We walked up to this small village and it was quiet. Marines don’t really like quiet, man. But after a prelim scan and survey of the place, our Iraqi guide helped us meet the locals. After thirty, forty minutes I see a small boy running around with soccer jersey on … but it wasn’t anyone famous, man. It was kids’ jersey … I recognised the badge. He noticed us and ran away. I put it out of my mind as we did a sweep of the streets and spoke to more locals. All these stray dogs followed me, which is normal there. I walked down a small path and that boy stood there, smiling…with something under his shirt.” 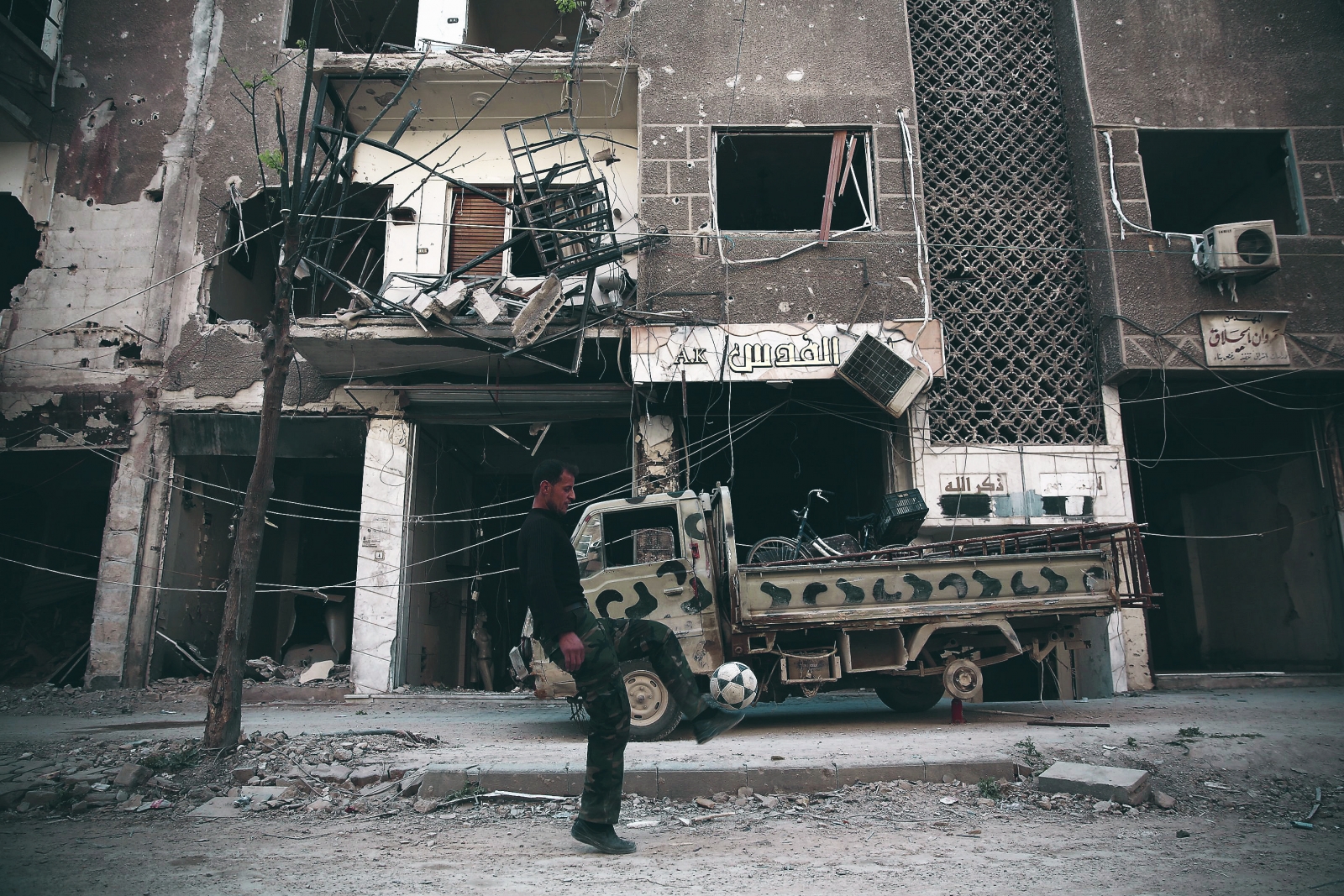 Brandon paused and began to well up and I told him, “Hey, buddy, you don’t have to talk about this …” but he continued.

“He ran up to me smiling and giggling…and I yelled, “Stop” and I lifted my rifle and pointed it at him. I put my hand out to signal stop and yelled in fucking Arabic for him to stop and he just ran toward me, man. He got within ten meters of me and I …” Brandon stopped talking for a few seconds before continuing, “I couldn’t put my finger on the trigger and before I knew it this boy was hanging my leg and pointing to the patch on my rucksack.”

“Yeah man, for some reason I traded patches with a guy in Camp Baharia (also known as Camp Dreamland or FOB (forward operating base) Volturno) and pinned it to my ruck. So this boy has this thing under his shirt and he’s hugging my leg. Everyone’s telling me to get him off and I pry him off and he lifts up his shirt and it’s a fucking deflated soccer ball. The patch on my ruck matched the faded AYSO (American Youth Soccer Organization) insignia on his jersey. He pointed to me and then the deflated ball. He just wanted to play soccer, man.”

Brandon stopped talking again and I sat there, with my own heart racing as he mustered up the conclusion of his story.

“I found our Gunny (Gunnery Sergeant) who tracked down our mechanic to pump this kid’s ball up. The boy pointed to his patch and the patch on the ruck and in my heart, man, I think he maybe saw me as a friend. Because of soccer, or something … and man, when I saw your t-shirt, it took me back there,” he said.

Brandon and I spoke for the next hour about how he played soccer for the first time in 14 years with this boy in Iraq and how he would have never survived the war if he had panicked and pulled the trigger on that pathway.

“We played all day … we were on patrol anyway and the village was clear,” Brandon said, “These people were good people, man. Just caught up in a world of shit, like all of us, but after that day, I thought about the sport more than I thought I ever would. It sounds stupid when I say it, but to me, a kid from north Georgia who played it as a kid and never was any good…but that game saved my life.”

For another hour we continued to talk. Brandon told me how sleep is hard for him due to nightmares and how he found his way to Chicago because his wife was from there. The course itself seemed to be cathartic for him, as we discussed conflict in published form often and he had the chance to write about his experiences. In hearing his story, I knew I could never wholly relate to his experiences, but I could listen and try to understand a world different from my own. And I think that’s all we can ever do as the world’s tournament enters its last week of play. We live in a world of clashing emotions, politics, and sporting preferences, but the reality is the sport is more than a game. Brandon Winslow said nothing else about the war and told me what could easily have been his worst nightmare became his best memory from his time fighting a war.

Soccer: it’s really a simple game in a complex world.