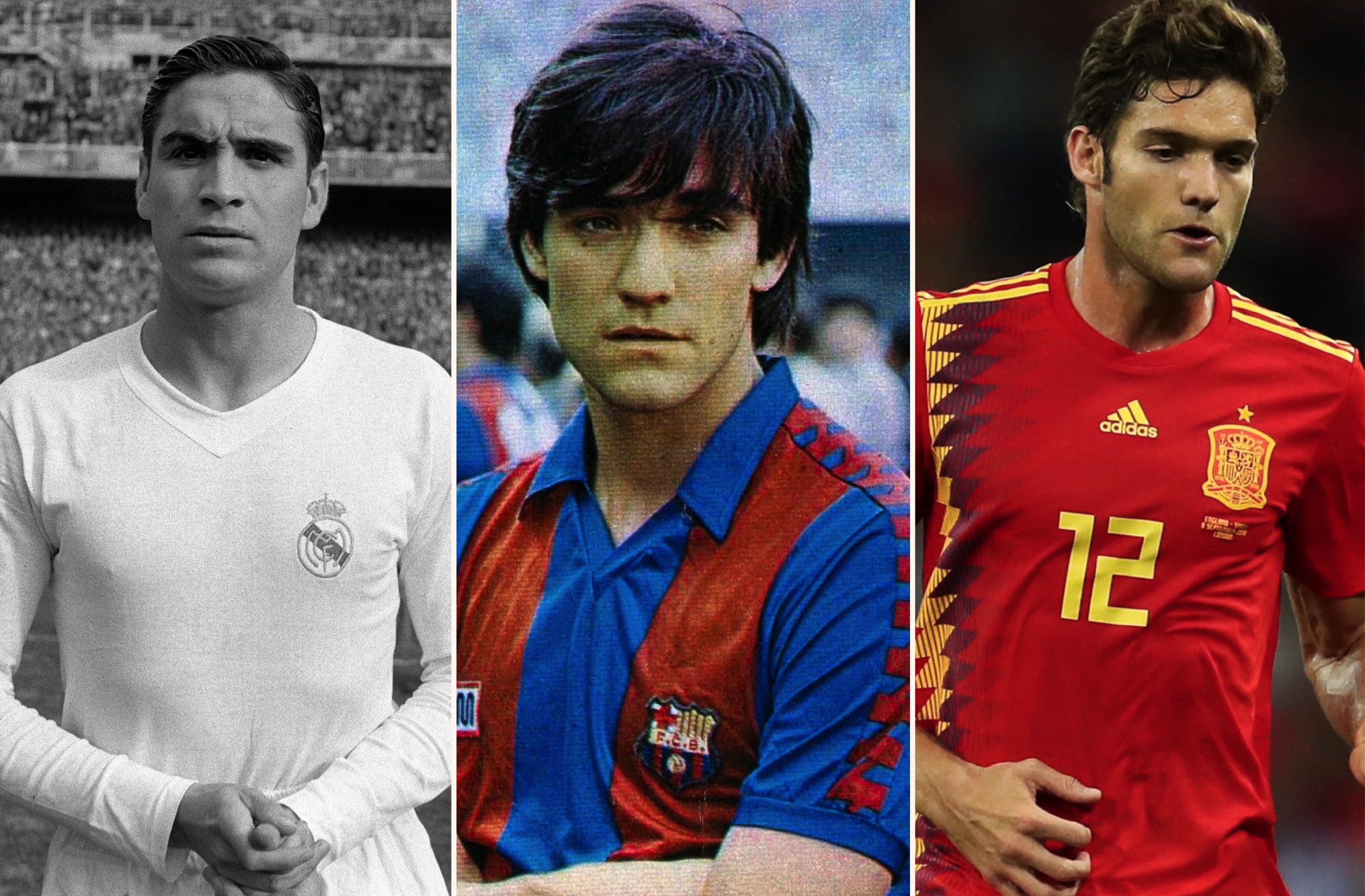 Wembley. It’s just two syllables, but a wealth of emotions. It’s one word that paints a thousand others. There are many iconic stadiums in the history of the beautiful game, but there are few words that carry as much prestige as Wembley. For decades, it was the stadium. It was where every player wanted to test himself.

“I don’t have many regrets as a footballer, but I wish I had played at Wembley even once, even in a friendly,” a retired Pelé said of the mystical venue. The Brazilian legend won World Cups in Stockholm, Santiago and Mexico City and played in front of packed arenas around the globe, but it hurt him that he never got the chance to step out in north-west London.

The Alonso family has no such regrets. Marcos Alonso Imaz, Marcos Alonso Peña and Marcos Alonso Mendoza have a modest haul of 27 Spain caps between them, but three of these appearances for La Roja have come at Wembley. One each.

Marcos Alonso Imaz was the first. The grandfather of Chelsea’s current left-back was a member of the Real Madrid squad that won the first five European Cups between 1956 and 1960, and he even scored in the first triumph over Stade de Reims. That impressive medal hau, however,l didn’t necessarily translate into regular Spain caps.

Better known as Marquitos, he only ever stepped out in a Spain shirt on two occasions. Interestingly, the maiden appearance came before his first continental success with Real Madrid and his second came after his fifth European Cup victory. On 17 March 1955, he played in a 2-1 defeat against France in front of his home fans at the Santiago Bernabéu. Then, on 26 October 1960, he was part of a 4-2 defeat at Wembley.

Described as a defender full of heart and courage, he was one of the most reliable of his generation. “I would win balls through strength and anticipation,” he later said of his playing style in an interview with El Mundo. He bought into the idea of ‘a grapple a day keeps the doctor away’. It was strange, then, that he only represented his country on two occasions. It was a shame that he never could taste victory while wearing red. 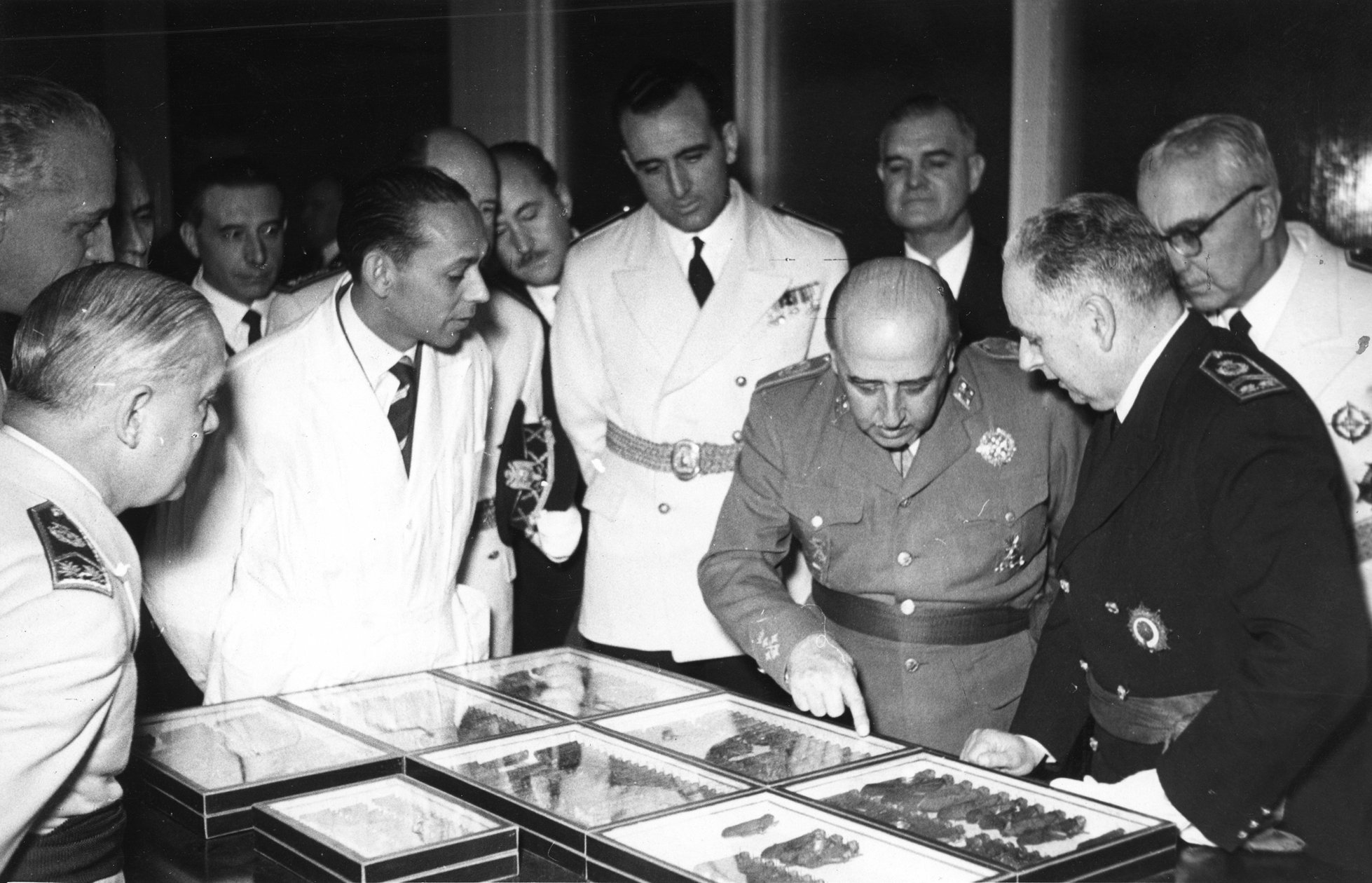 Read  |  The story of Real Madrid and the Franco regime

For Marquitos, his career is remembered much more so for his club exploits and for the wearing of white. As well as making 223 official appearances for Real Madrid over nine seasons, he had played for his hometown team Racing Santander. Short stints at Hércules, Murcia, Calvo Sotelo and Toluca followed his adventures in the Spanish capital, before he hung up his boots, opened shoe stores in Madrid and in Santander, and raised his family.

Marcos Alonso Peña was the second. He is also the one to have made the most Spain appearances of the trio, with 22. The son of Marquitos followed in his father’s footsteps in going on to play for Spain and making an appearance at Wembley, but he also went off course and marked out his own path in the sand.

Not only did the more technical and quicker Marcos Alonso Peña play as a winger or as a forward instead of in defence, but he did so wearing the colours of Real Madrid’s rivals, Atlético Madrid and Barcelona.

He started his career in the youth academy of the club where his father had become a hero but left to make his professional debut with Racing Santander at the end of the 1970s. Then came a call from Atlético in 1979. “If you want to join Atlético then go ahead, it’s fine with me,” his father told him. So off he went to the Vicente Calderón at the age of 20.

Following three seasons in red and white, the forward joined another of Real Madrid’s rivals for a fee of 150 million pesetas. His move to Barcelona made him the most expensive Spanish player at the time, and he generally lived up to his price tag with consistent performances for the Catalan club, scoring 34 goals across five seasons and helping the side to win a league title, a Copa del Rey, two Spanish League Cups and a Spanish Super Cup. In the Copa del Rey triumph of 1983, he even scored the winner in a 2-1 victory against Real Madrid.

A return to Atlético followed, with two more seasons spent at Los Colchoneros before a season at Logroñés and a homecoming to Racing to help them win promotion from the third tier back to the Segunda. 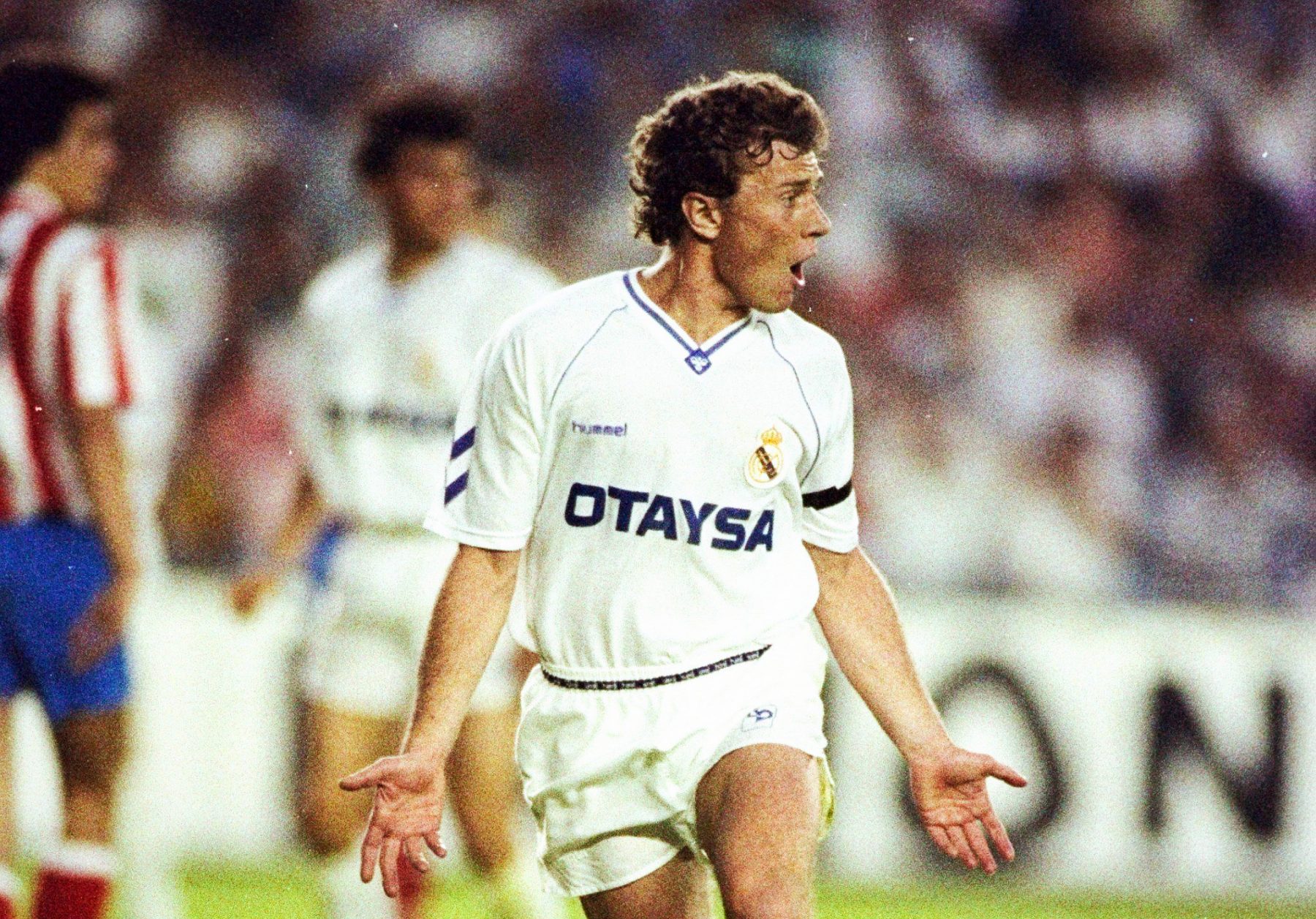 It was a memorable career at club level, but his international stint was a rich one too. As the son of a former Spain international and as one of the brightest prospects in the Spanish youth teams, there had always been high hopes for this Marcos Alonso. Inclusions in the Spain squads for the 1979 FIFA World Youth Championship and the 1980 Olympic Games in Moscow gave him a taste of life as an international footballer.

Then came his senior debut for La Roja – and it came at Wembley. Aged just 21, the Atlético star picked up the baton his father had laid down – who finished his brief international career at the home of English football – and then carried it on, playing the full 90 minutes on 25 March 1981, helping La Roja to a 2-1 victory. It was Spain’s first ever win over the Three Lions on English soil and this was a huge deal for those on the Iberian Peninsula.

“A team that was theoretically inferior to the English was able to earn a positive result that will undoubtedly be remembered by fans like those previous wins over the English in 1929 or 1950,” wrote Julian García Candau in El País the following morning.

García Candau went on to praise the hard work put in by the debutant and his strike partner Jesús María Satrústegui in an isolated attack. “Marcos and Satrústegui stayed up front and were lost souls at points, but they persisted when it was necessary and were optimally situated for the moments of counter-attack,” the journalist explained.

A further 21 international appearances followed over the next four years, while he was also included in the squad for Euro 1984. It was a very respectable playing career and one which he followed up by moving into coaching, taking charge of a number of historic clubs as he managed Rayo Vallecano, Racing Santander, Sevilla, Atlético Madrid, Real Zaragoza, Real Valladolid, Málaga and Granada. 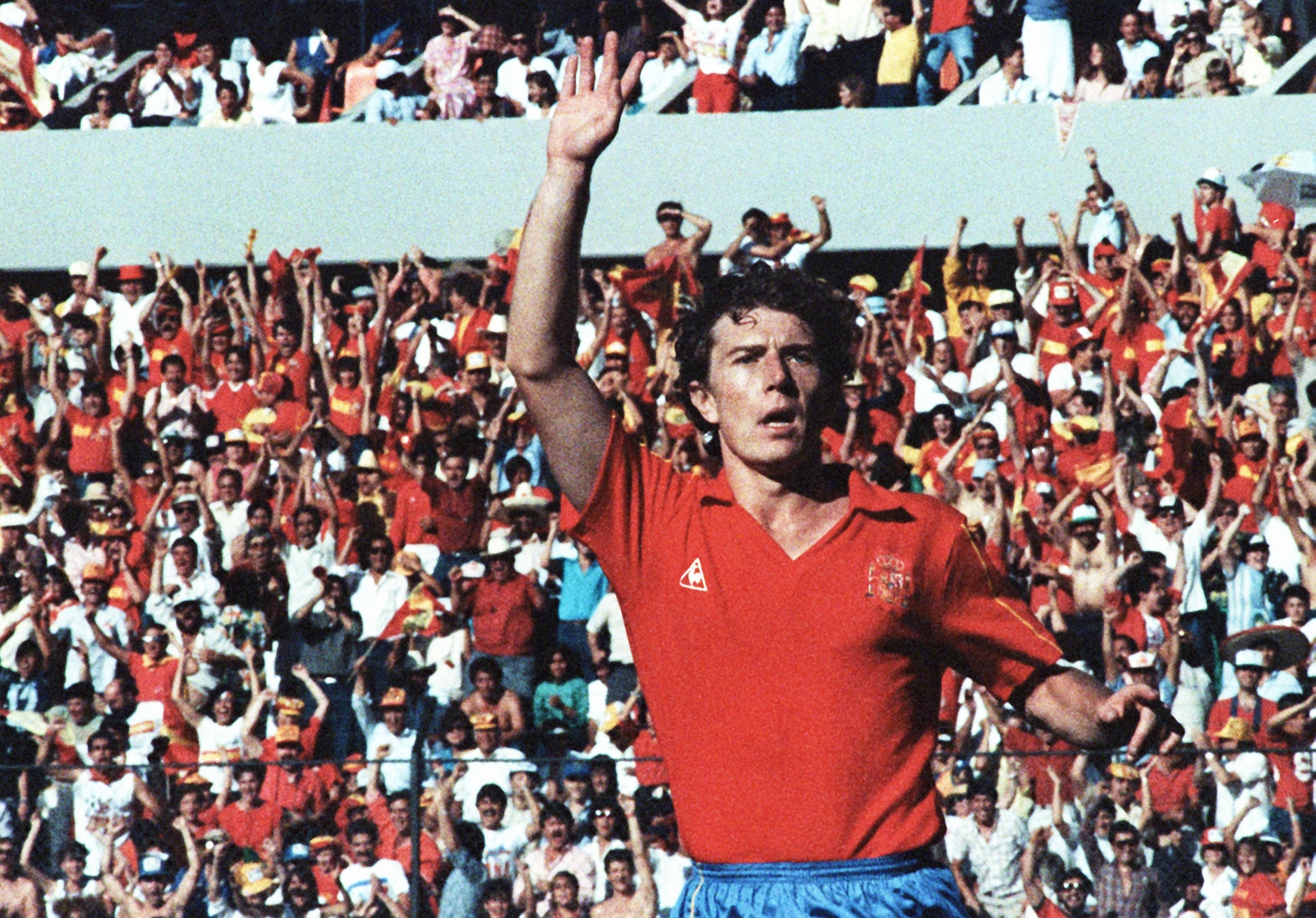 Read  |  The often-forgotten excellence of Spain at Euro 84

Marcos Alonso Mendoza was the third. Unlike his father and grandfather, the Chelsea player represented Spain at the new Wembley, opened in 2007, and he did so in a competitive fixture. It was in the opening match of the 2018/19 UEFA Nations League and it was his competitive debut for his country.

The left-back had already played 11 minutes for La Roja in a 6-1 thrashing of Argentina in a friendly in March 2018 after years of peeking through the keyhole, but was given a start by new coach Luis Enrique as the Asturian considered alternative left-back options to Julen Lopetegui’s automatic starter, Jordi Alba.

Like his father, Alonso was on the winning side at Wembley, as the English were defeated 2-1. It was just the second win over the Three Lions at Wembley for the Spain national team, and it was the second involving a player from this footballing bloodline.

This match in September 2018 may have been the then 26-year-old’s first outing at Wembley with his countrymen, but it wasn’t his first appearance at the famous stadium. In fact, Wembley had become something of a regular haunt for the defender by then.

Having left the Real Madrid academy at the age of 19 to move to Bolton, Alonso has spent almost his entire professional career playing outside of Spain. He only ever represented the senior Real Madrid side for two minutes, fittingly doing so in an away game at his family’s beloved Racing Santander, before his move to the north of England in 2010.

In his first season, he was heavily involved in the Trotters’ FA Cup run and helped them to the semi-finals, only to be left out by Owen Coyle for the big match at Wembley. From the bench, he watched on as his teammates were hammered 5-0 by Stoke.

A move to Fiorentina followed for Alonso in 2013, but he was loaned back to English football in the winter window of the 2013/14 season as he joined Sunderland – and he finally got the chance to play at Wembley as his new club reached the final of the League Cup. “It was a bad day,” he said of his snub in the 2011 FA Cup semi-final in the build-up to the showpiece event with Sunderland. “But football always gives you another opportunity. Wembley is one of the top stadiums in the world.”

Sadly for Alonso and for the travelling Sunderland support, Manchester City won the final 3-1. A return to Italy followed in the summer of 2014 before Chelsea signed him in 2016. With the Blues, Alonso finally started to experience some Wembley joy. In the 2016/17 season, he tasted his first Wembley win as Chelsea defeated Tottenham 4-2 in the FA Cup semi-finals, although a 2-1 defeat to Arsenal in the final and a penalty shootout loss in the summer’s Community Shield meeting with the same opponent meant the Spaniard would have to wait for his first silverware at the stadium.

That eventually came in the 2018 FA Cup final with a 1-0 victory over Manchester United, but not before Alonso had scored his first Wembley goals as he was the star of the show in a 2-1 Premier League victory over Tottenham in August of 2017, ruining Spurs’ first game at their temporary home.

While the FA Cup triumph was followed up by a further Community Shield defeat, the call-up to the Spain squad and the victory over the Three Lions provided further joy for the left-back in the autumn of 2018 at the stadium where his family has crafted a unique legacy.

For three generations of the same family to have represented Spain is already an incredible feat, but for all three of these players to have played for their country at Wembley is a rare feat that may never be emulated. For two of them to have been part of wins is even greater still.

In total, this family of Marcos Alonsos boasts a combined 27 Spain caps. But this tally could rise further if the youngest adds to his three appearances for the national side or if he passes down his international footballer genes. Another Marcos Alonso would be born as a just-add-water footballer. This family’s La Roja legacy isn’t over yet.