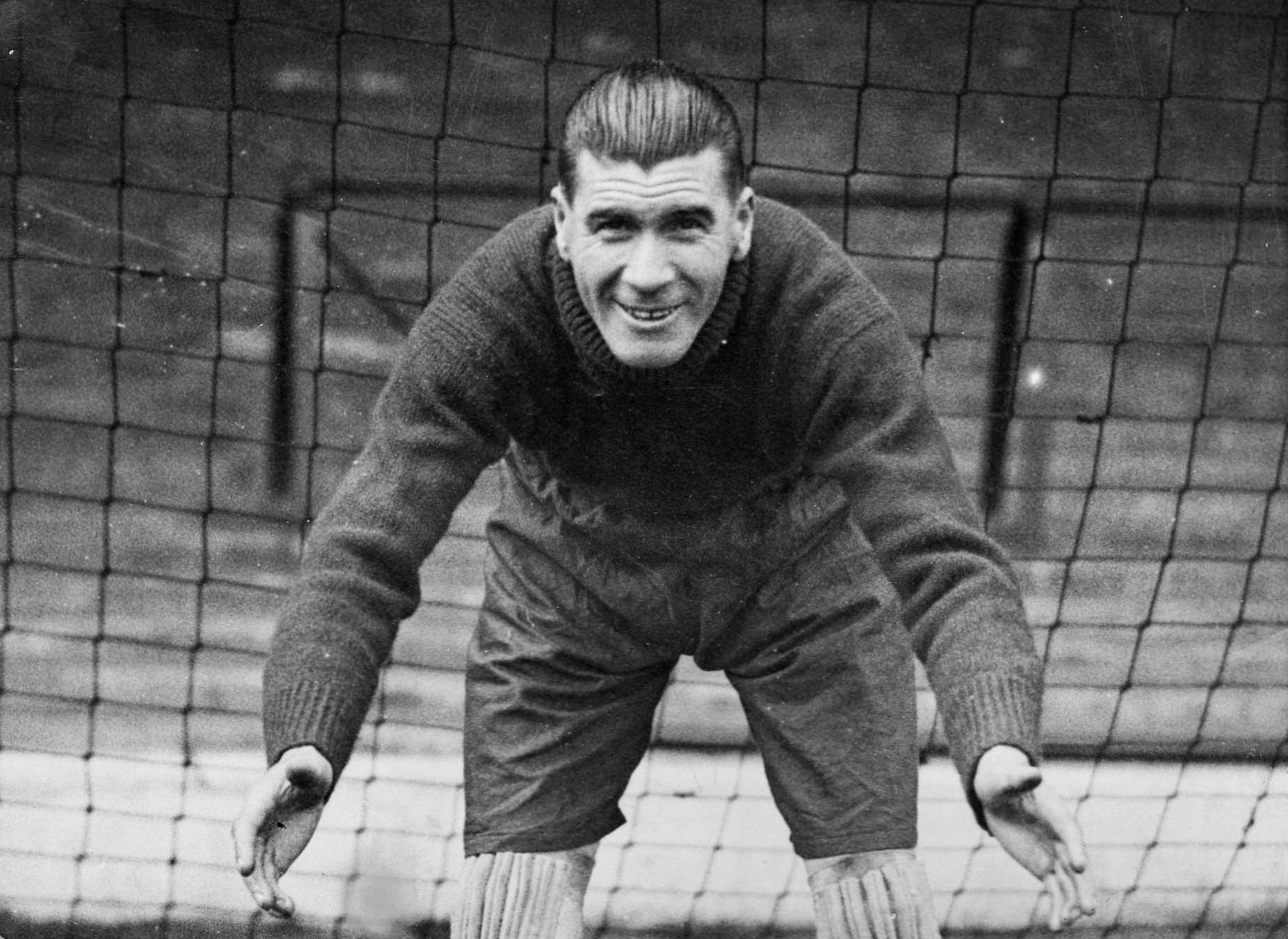 There’s nothing special about the grave of Liverpool’s greatest goalkeeper. Nothing glamorous about the sullen tombstone or the weeds that threaten to overrun the plot. It does the job without fuss or frivolity. A bit like Elisha Scott himself.

These days Belfast feels cosmopolitan. Trendy pubs fight with upmarket retailers for space on its bustling streets. In 1893, however, it was a very different place. Women toiled thanklessly in the city’s ubiquitous flax mills, while men jostled for work outside the gates of Harland and Wolff shipyard. The prospects for Elisha Scott, one of 12 siblings born into a ramshackle house on the Donegall Road, were as grim as any other child born into the morass. Just as well, then, that he had a precociously talented brother to look up to.

Billy Scott was a brilliant goalkeeper who would go on to star for Everton and Leeds. He was an established league player by the time his younger brother was making his own name, wowing the critics as a shot-stopper for local outfit Broadway United.

In 1912, at Billy’s insistence, Everton manager Will Cuff took his younger brother to Merseyside for a trial. Cuff was unimpressed by the slight, five foot ten teenager standing before him, thinking him ill-prepared for the tumble and rigour of top-flight football. Downcast, Elisha readied himself for a return home, only to receive a surprise invitation from the club’s cross-town rivals.

Liverpool chairman ‘Honest’ John McKenna didn’t hesitate, signing the Belfast man almost immediately. The 19-year-old was placed in the reserves, serving as understudy to first-choice goalkeeper Kenneth Campbell. It would be New Year’s Day 1913 before he made his full debut in a 0-0 draw away to Newcastle. In his only appearance of the season, he earned rave reviews. “Hats off to Scott, Liverpool’s youthful guardian,” the Liverpool Echo enthused. “His debut was brilliant and a pleasing augury.” Indeed, Newcastle reportedly offered £1,000 for him on the spot. Needless to say, the Magpies were rebuffed.

Despite earning his side’s only away clean sheet of the season, Scott was relegated to the reserves once more as Campbell returned. It would be another 10 months before he completed his home debut, and a further year before he dislodged Campbell altogether. Just when Scott was cementing his place, Europe plunged into war. With league football suspended, he returned home to Belfast, signing terms with Linfield. It wasn’t long, however, before he made the switch that would begin a lifelong affiliation. 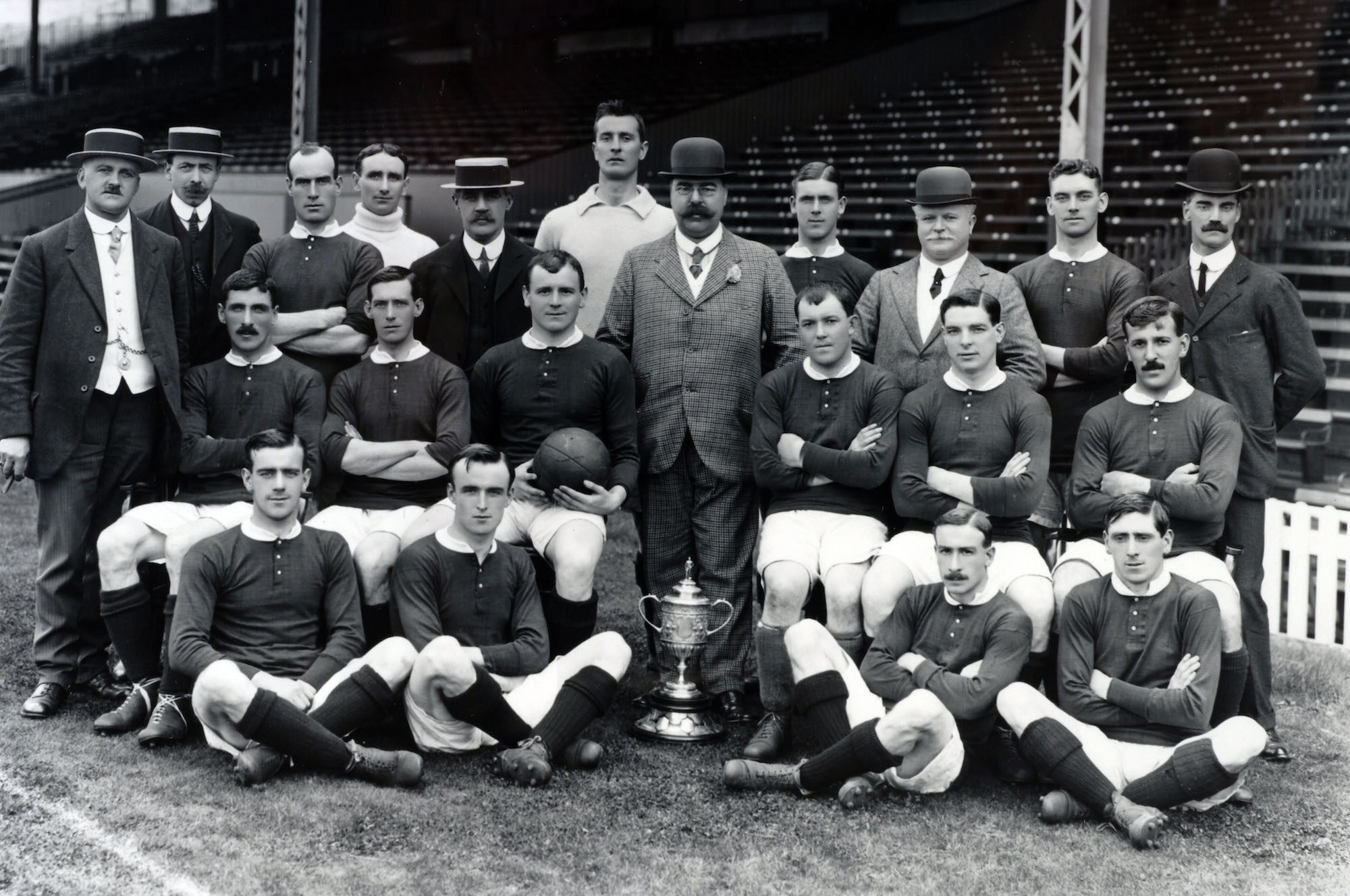 Read  |  Manchester United, Liverpool and the great betting scandal of 1915

Belfast Celtic were formed in 1891, concocted by members of the Sentinel Cricket Club during a meeting at the city’s Beehive Bar. The team was an overnight success, winning the County Antrim Shield in 1895 before their admission to the Irish league two years later.

When Scott joined in 1916, they were the premier force in Irish football, having twice won the title. He was immovable between the sticks for the next two seasons, winning consecutive Irish Cups before Liverpool beckoned him back to Merseyside as the war ended.

Finally, Scott’s luck changed. He returned to a side packed with talent, a fearsome backline of Tommy Lucas, Ephraim Longworth and Donald Mackinlay augmented by Walter Wadsworth and Tom Bromilow in midfield. With the defence taking care of itself, the mesmeric winger Bill Lacey was free to torment opposition defences, creating chances for the lethal Harry Chambers to finish. Scott, however, became the team’s reference point, conceding the fewest number of goals of any goalkeeper in the division in 1921 as Liverpool finished fourth.

Over the next two years, he missed just three games as Liverpool won consecutive titles. His acrobatic saves and stern marshalling of the defence made him a fan favourite, with the Anfield crowd even dedicating its first ever individual chant in his honour. Cries of “Lish! Lish! Lish!” rang out incessantly, increasing with every spectacular save.

In a game against Blackburn Rovers in 1924, a supporter even ran onto the ground and kissed his face, so overjoyed was he with the bemused Irishman’s acrobatics. “Scott never exhibits tricks in goal,” marvelled the Daily Mail in a 1931 piece. “He catches balls that others would fist; he puts the ball over the bar for a corner when others would be spectacular in clearing. Scott never takes a chance.”

The Football Echo was similarly effusive, According to an article published in the Irish News in 2013, they “carried a cartoon in the late 20s depicting Elisha as a saint in a stained-glass window with the following inscription on it: ‘It matters not how hot the shot, How charged with sting the ball may be, Fast as they come he stops the lot And never lets them go Scott free’.” 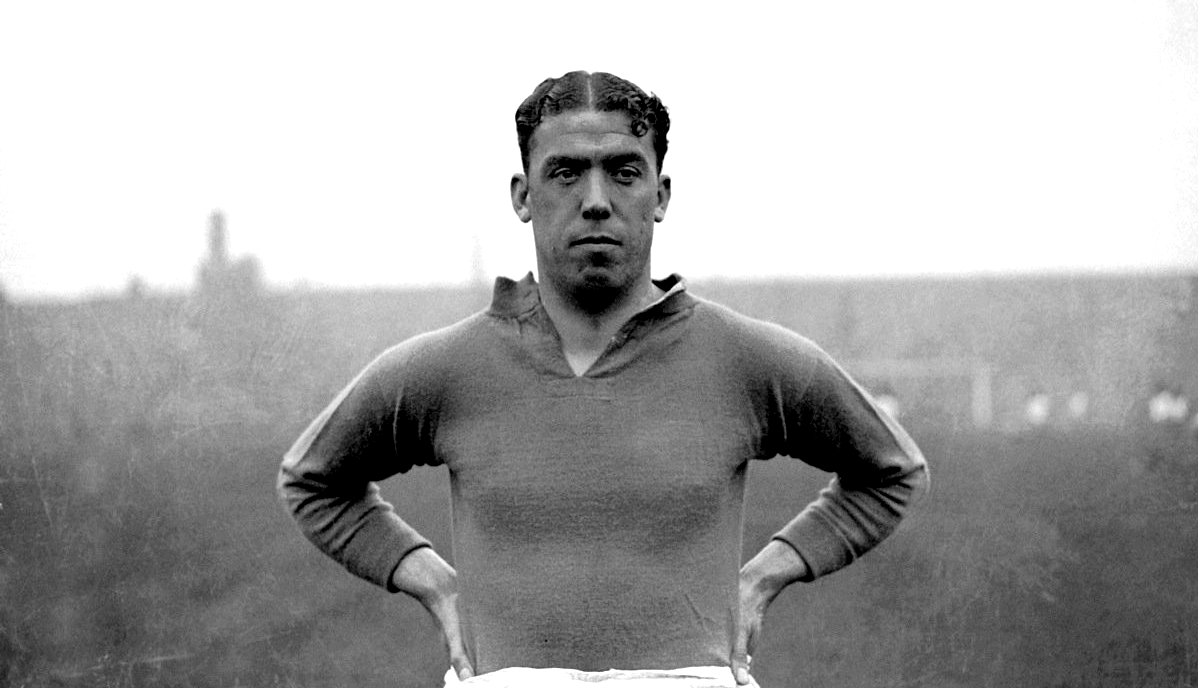 “A wonderful goalkeeper, the best I have seen,” Donald MacKinlay would later agree in Mark Platt’s The Red Journey: An Oral History of Liverpool Football Club. “I put him above Sam Hardy.” One man who seconded that opinion was the legendary Everton forward Dixie Dean. Fierce rivals on the pitch, the two were close friends off it, enjoying pre-match cigarettes together and often meeting for drinks after games.

Dean, who would go on to score 349 goals in 399 games for the Blues, was in no doubt about the calibre of the man who so would so often thwart him in Merseyside derbies. “You can have Swift, Trautmann, Banks, Wilson. You can have them all,” he is reported to have said. “I’ll take Elisha Scott.”

Scott was immovable from the Anfield goal, making close to 500 appearances before the emergence of Arthur Riley threatened his place in the team. Originally signed in 1925, it took two years for big South African to take Scott’s place, with the Irishman’s removal coinciding with a relatively fallow spell for the club.

With Scott’s future unclear, links with other league clubs began circulating. In 1934, Everton made a cheeky offer for his services, one that looked for all the world like it was being accepted. It was only a mass protest from Liverpool fans that prevented the transfer going through.

With a move across Stanley Park dashed, Scott decided to retire from the English game after his 468th Liverpool fixture, a 2-0 loss to Chelsea. At the final whistle, he was invited to the directors’ box to deliver a valedictory address to the fans who had grown up, got married and had families whilst watching him marvel between the sticks. “My final parting with Liverpool was one of the biggest breaks in my life,” Scott recalls in Red Journey.

“My broadcast to the spectators on that last fateful night was a nightmare. While I was trying to say a few words into the microphone, the memories of the years crowded before me. My coming to Liverpool as a boy and all my varied experience covering those eventful 22 years, the famous players against whom I had striven so often, the glorious moments in cup and league, and the sorrow of leaving those faithful followers, who had stood by me through thick and thin. All those things swam before my eyes. I was tongue tied, and scarcely able to utter a syllable.” 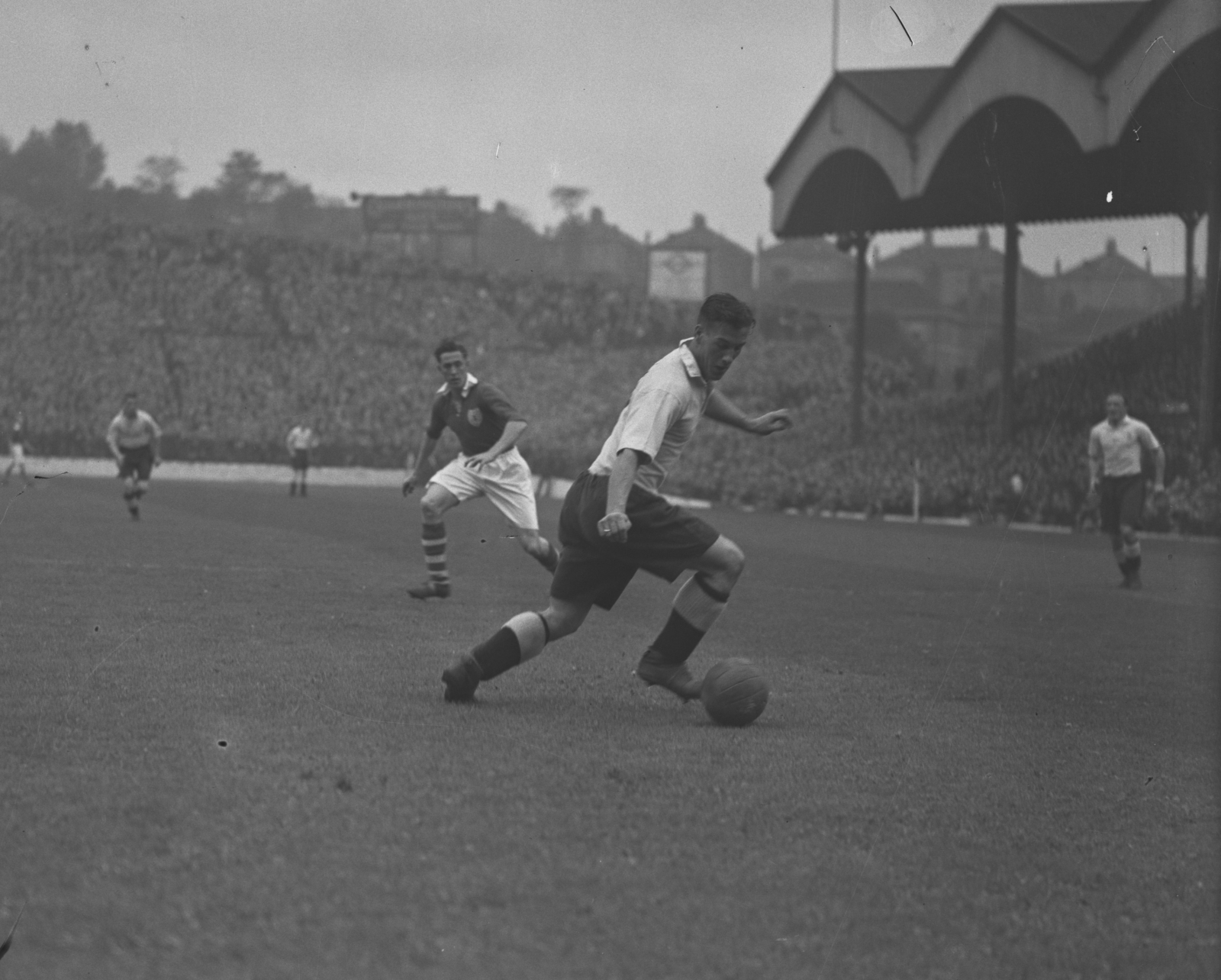 Read  |  Nat Lofthouse: the Lion of Vienna and the gent of Bolton

Given the mutual affection between club and player, it was no surprise when Scott was voted Liverpool’s greatest ever servant in a 1939 poll. But after nearly 500 games and 150 clean sheets, he returned to Northern Ireland in the summer of 1934 for his next adventure.

He was met by a country at war with itself. Partition in 1921 had done little to sate either the unionists fighting to remain or the nationalists aching for secession. Catholic communities were openly discriminated against. Even Basil Brooke, the Ulster Unionist who would go on to become Prime Minister of Northern Ireland in 1943, was unabashed when he professed that “Catholics are out to destroy Ulster with all their might … I would appeal to loyalists, therefore, whenever possible, to employ good protestant lads and lassies”.

In a climate of tension and prejudice, Belfast Celtic became an important beacon for the city’s downtrodden catholics. The club had exited the Irish League in 1920, leaving alongside Shelbourne and Bohemians over concerns about player and supporter safety. When they returned some four seasons later, the Celts quickly reclaimed their hegemony, winning the league in four out of five attempts. By 1934, they were the unquestionable doyens of the local football scene. When they announced the capture of Elisha Scott as their new player/manager, it was widely seen as a coup.

Celtic’s players, however, wouldn’t have time to savour the appointment. Scott was as unforgiving a coach as he was a player, drilling his charges incessantly to ensure they were amongst the fittest in the league. Their every move was monitored, including off the pitch. The wily new coach employed a network of ‘spies’ who would rat out any men found cavorting in the city’s pubs and clubs on evenings before matches.

As a coach, Scott retained the standards of fitness and rugged discipline that had characterised his two decades as a stopper in front of the Kop. Stay in line, however, and you were judged purely on your ability as a footballer. “I don’t play protestant players and I don’t play catholic players,” he famously said. “I play good players.”

This rigorous approach to training and preparation would pay immediate dividends. In his 15 years as manager, Celtic won 10 titles and six domestic cups. Once again, however, events off the field would soon make competition impossible.

Clashes against the mostly protestant-supported Linfield were always febrile. In 1912, a match had been abandoned after supporters clashed in the stands. Some 36 years later, tensions remained at boiling point. On 12 December 1948, Celtic played their last meaningful match. 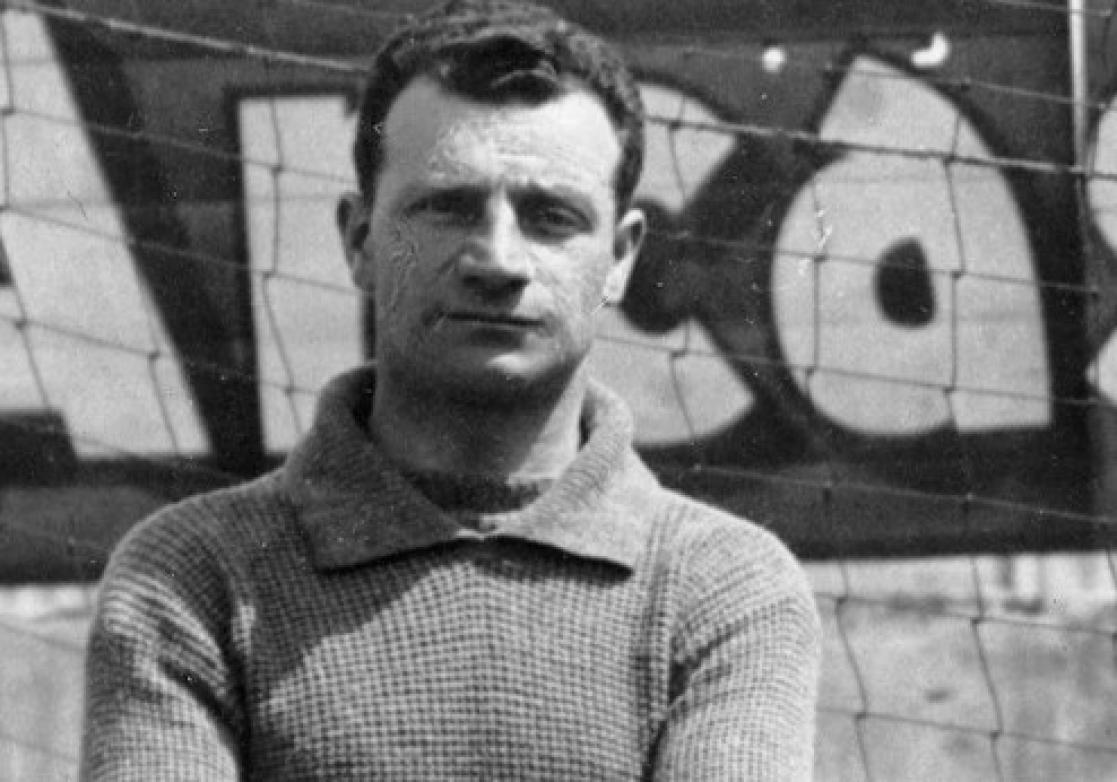 “Even with so much of the season left, It was already looking like this game would be a league decider,” wrote Benjamin Roberts in the book Gunshots and Goalposts: The Story of Northern Irish Football. “If the stakes were not already high enough, it was played out against the backdrop of an impending Northern Irish election, called to reaffirm the case for partition in light of Ireland’s new-found independence from the Commonwealth.”

Little wonder, then, that Billy Simpson’s late equaliser sent Linfield fans pouring onto the pitch. Exuberant celebrations soon devolved into violence, with scores of men descending on Celtic’s stranded players. Young forward Jimmy Jones was subjected to a vicious beating, drowned in a hail of boots and fists as his leg was shattered. No arrests were made, with Linfield given paltry punishment by the Irish Football Association. Disgusted, the Celtic hierarchy withdrew the team from the Irish League at the end of the season.

Gradually, the team’s players were sold off or released. Scott watched on as the squad he built disintegrated from view. After a money-spinning farewell tour to America, the club effectively folded in 1949.

For the next ten years, Scott remained as the club’s de facto administrator, maintaining the stadium and pitch before his untimely death in 1959. “The stadium’s immaculate turf stands a fitting memorial and testimony,” said one club official, “to the life and labour of a man who did all things well and whose memory I hope will long remain as green as the verdant square which he loved so well on the Donegall Road.”

Hundreds of supporters lined the streets for Scott’s funeral, which saw the coffin make its way from the Donegall Road to Belfast City Cemetery. After 39 trophies as a player and manager, Scott’s legacy was as tangible as the soil to which he was interred. “He was Belfast Celtic,” wrote the late Belfast Telegraph sportswriter Malcolm Brodie in 2009. “A man-apart – a one-off.”

Elisha Scott, however, was much more than that. One of Liverpool’s greatest goalkeepers, Belfast Celtic’s greatest manager, and a true Northern Irish legend. More people should know his name, even if one imagines that, if alive, Scott would shrug away the praise. For him, getting the job done was satisfaction enough.