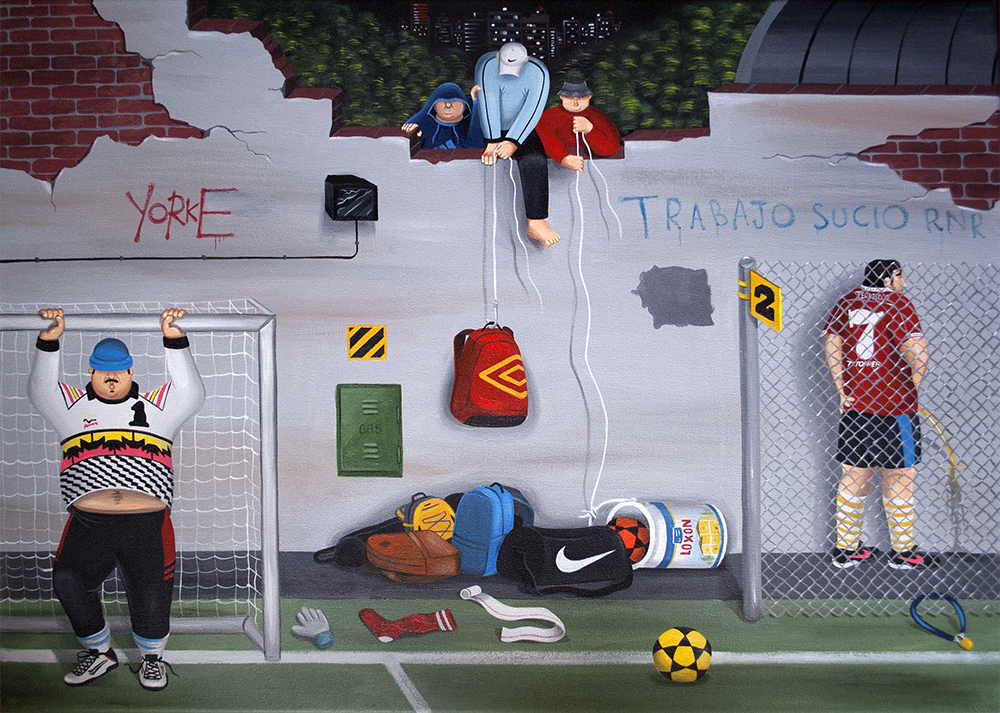 Football: although we might not see it as something that we take from, it gives us so much. It’s a spectrum of involvement. Footballers earn their keep from the game, while for others, it is their main reason for living. It’s their faith, their love and their life. That might seem hyperbolic, but if you know, you know.

To paraphrase and slightly hijack one of John F. Kennedy’s famous phrases, ‘Ask not what football can do for you, but what you can do for football.’ Yes, we all love the sport, but what can we give back to the game that given us so much? There’s the individual;s who wake up at silly o’clock every weekend to manage their child’s team and we salute them. There’s also the boffins that spend hours pouring over the tactic of every game, just to make online videos to help us laymen understand the nuances behind each manager’s hard-fought philosophy. We salute them, too.

For others, it’s buying the kit, buying a scarf, occasionally going to see your team, or even having a season-ticket and being a shareholder. You’re all giving something and we salute you. For Argentine artist Martin Gordopelota, he offers us something rather unique in football – a new perspective on the game. Here’s why I think we should salute him.

Living and working from the country’s capital, Buenos Aires, Gordopelota is right there in amongst it, the ebb and flow, the horns and screeches, the smoke and the fire. Immersed in the vitality of a capital that boasts two of the world’s most iconic football teams, Boca Juniors and River Plate, it’s a fertile ground for a creative mind.

The city of Buenos Aires has a rhythm dictated by its three million inhabitants. It’s a silent sound that the porteños interpret in their own way. Buenos Aires is the Paris of the south. It’s elegant and undeniably European, yet its blood is strictly Latin. 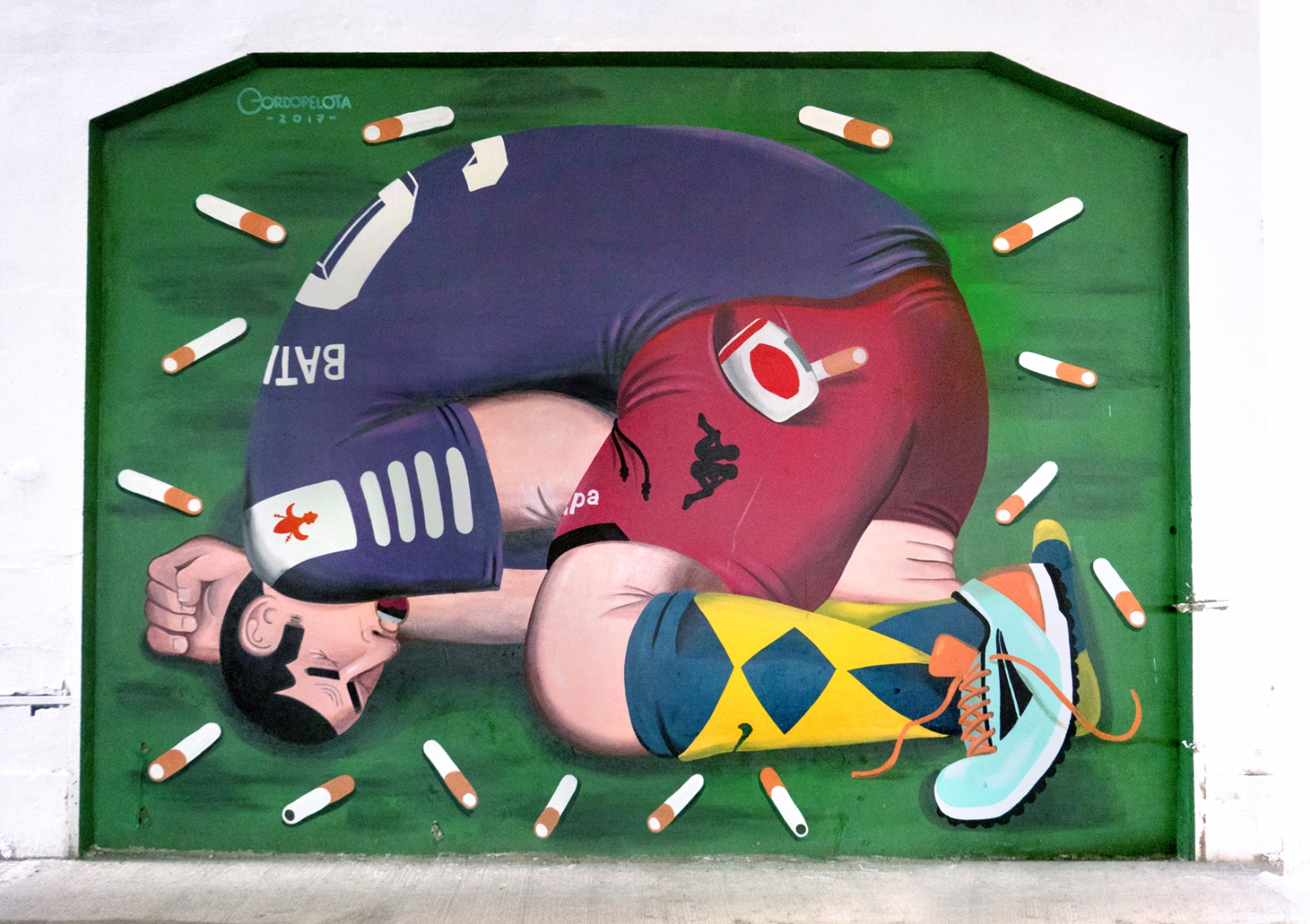 These juxtaposing worlds provide the spark. The friction between the old, archaic elegance of European sensibilities rubbing up against the modern hip lifestyles of the city’s three-hour lunches, people-watching cafes and sweaty late-night clubs allow chaos and order to coalesce.

From this, we have Martin Gordopelota, a painter and lover of football. There are many that share these two interests, but very few that fuse them together in the way he does. Instead of focussing on the golden boys and contributing more fan art, Gordopelota instead turns his attentions to the normal people – the many that make up football’s invisible playing ranks.

Football in Buenos Aires, thanks to the diminutive Diego and the Superclásico, goes beyond being just a physical experience and becomes closer to a spiritual and emotional journey. Seeing with your eyes isn’t the only way to see it. It’s a Venus flytrap for football lovers. A siren song for soccer enthusiasts.

Jorge Luis Borges wrote of the place: “Without the streets or dusks of Buenos Aires, a tango cannot be written.” It’s in this urban landscape, on these enchanting streets of Argentina’s capital, that Gordopelota meets with his friends to play five-a-side football. It’s on these rugged fields of artificial grass that he finds his muse.

I asked Martin what it is about the five-a-side game that he most enjoyed. “Mostly the social side of it. The idea of playing fútbol as an excuse to meet your friends and do something just for the sake of doing it.” But there was more. There were half-time cigarettes, pre and post-match beers to quench the weariness of exertion. It seemed therapeutic. An antidote and escape from modern life, it also offers Martin “a great excuse that’s used to talk about fears, nostalgia, defeat, anxiety, my personal experiences, friendships, Argentina, my limited view on the world, and some other stuff.” 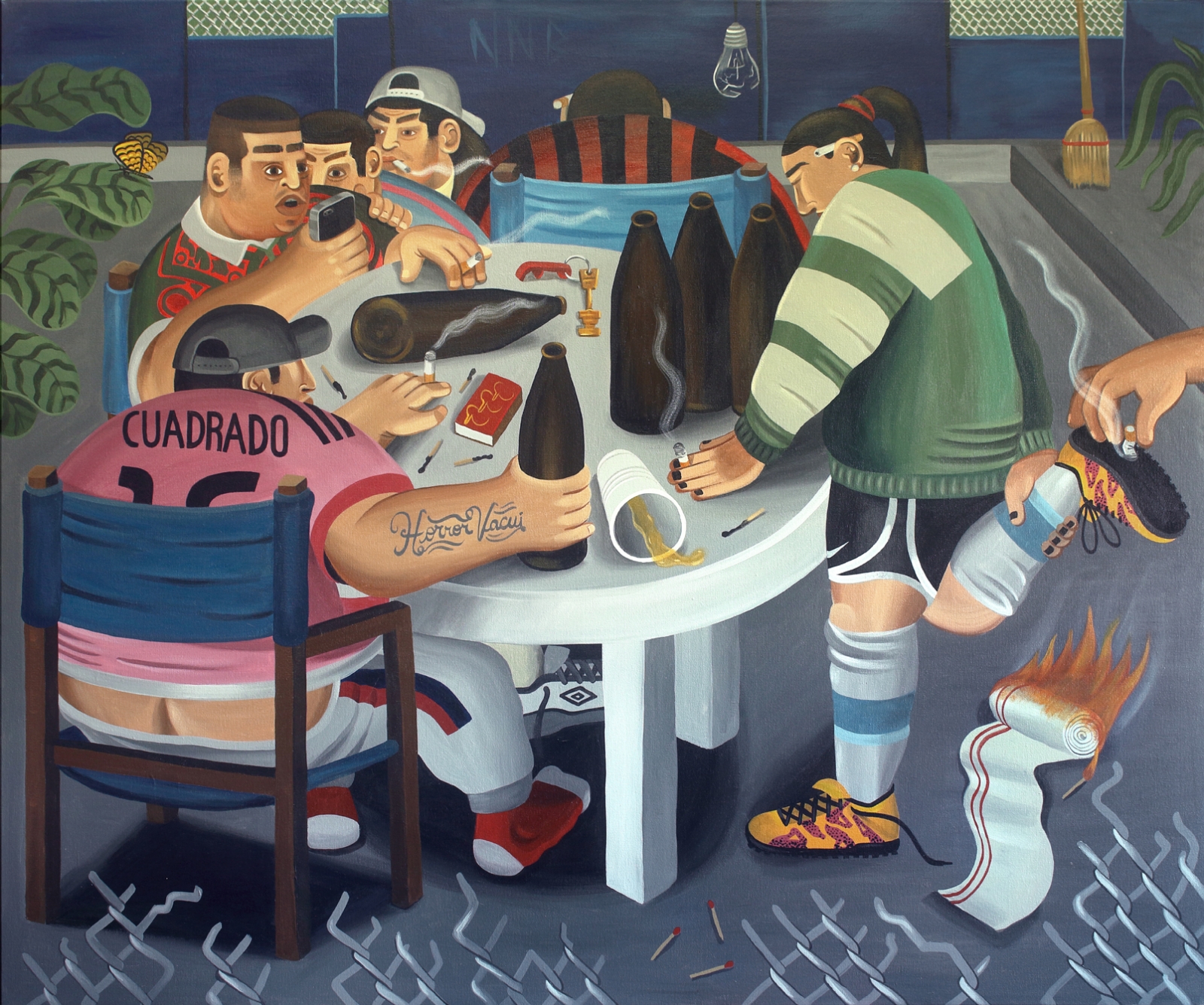 It’s clear from his artwork that these experiences on the field deeply shape his worldview of life beyond it. His artwork has the primitive and naive qualities shared by many popular folk artists. Amongst his influences are Fidel Fernández, a Paraguayan artist exploring his country’s past, and Beryl Cook, an English artist known for poking fun at the expectations and conventions of society through humorous interpretations of everyday situations.

Gordopelota and his influences have one thing in common: they’re painting the life they see as inhabited by everyday people. There are no heroes, no villains, no superstar signings. Although ordinary, there is something of the outsider in his subjects. They’re the people that never quite made it, but they’re happy with their lives. They might be widely overlooked by society, but they’re happy enough without them. They aren’t wearing all the latest gear; they don’t need it.

Football is the unifying bond they share. He realises the difference between Messi and messy, but sees the similarities too. So, what does amateur football have that the professional game doesn’t? “Chubby, drunk, slow-mo, unskilled, real people. Oh wait, you can find some of those at a professional level too.” The fun and love of the game underpins everything he paints, everything he says.

Gordopelota works both on canvas and on walls, adding to the canon of Buenos Aires’ thriving street art scene. It is a city that can feel like a museum without entry fees, borders or security guards breathing down your neck. Every wall is an opportunity to express yourself and the large murals work in conversation between the artist and passer-by, between the city’s past and its present.

The figures depicted in his pieces are composites. They’re inspired by friends but are a manifestation of ideas as much as true-to-life renderings. It’s because of this that we are able to relate to them. Through his paintings and murals we gain an insight capable of making our hearts race for exploration. We are transported from the cold winter of home to the warmth a sweating body kicking a ball around in Argentina. 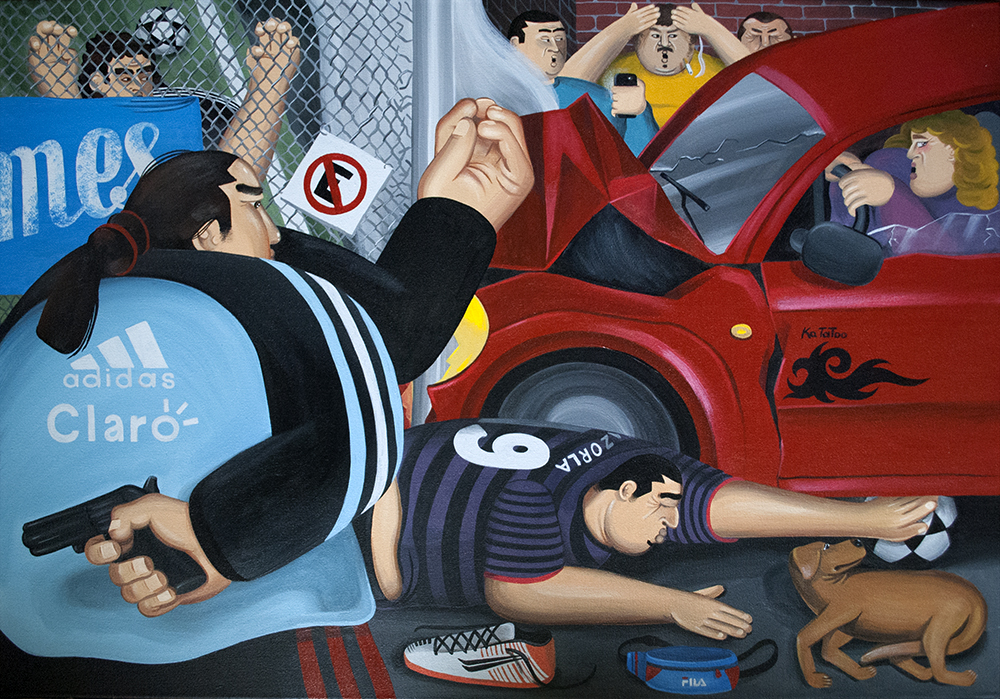 Suddenly, our retro kits are sticking to our bodies; we’ve got the taste of our pre-game beer on our lips and the smell of barbeque flirting through the sky. There might not always be music, but it doesn’t need any – football has its own.

Martin captures scenes familiar to anyone who’s ever played the game. In one piece, there’s a lazy dog lying in the shade of a car, an outstretched arm grappling with the ball lodged between the chassis and the road. In another, we see a group rappelling over a wall into an unused pitch. That feeling when you get in is of sanctuary. When the ball comes out of the bag and the laces are tied, you’re in the Garden of Eden.

Seeing himself first and foremost as a frustrated player allows Gordopelota to empathise with these familiar scenarios. He’s not pretending to be something he’s not. The realness and authenticity of football, like his art, comes from love. When it gets too serious, when money and pressure begin to cripple the heart, it’s over.

There’s a sad humour that permeates his work. The paintings feel a bit like mirrors of our own lives. Regardless of how the characters feel, or their expressions, they seem to laugh and radiate joy. It’s a melancholic investigation into football’s redemptive quality and ability to unite similar souls.

Gordopelota, in-keeping with the Latin American spirit of revolution, sees football as a machine, creating robotic players as cash-cows. He answers back with highly organic works, full of vibrant colours and shapes, as an unconscious protest against the commercialisation and homogenisation of the game. 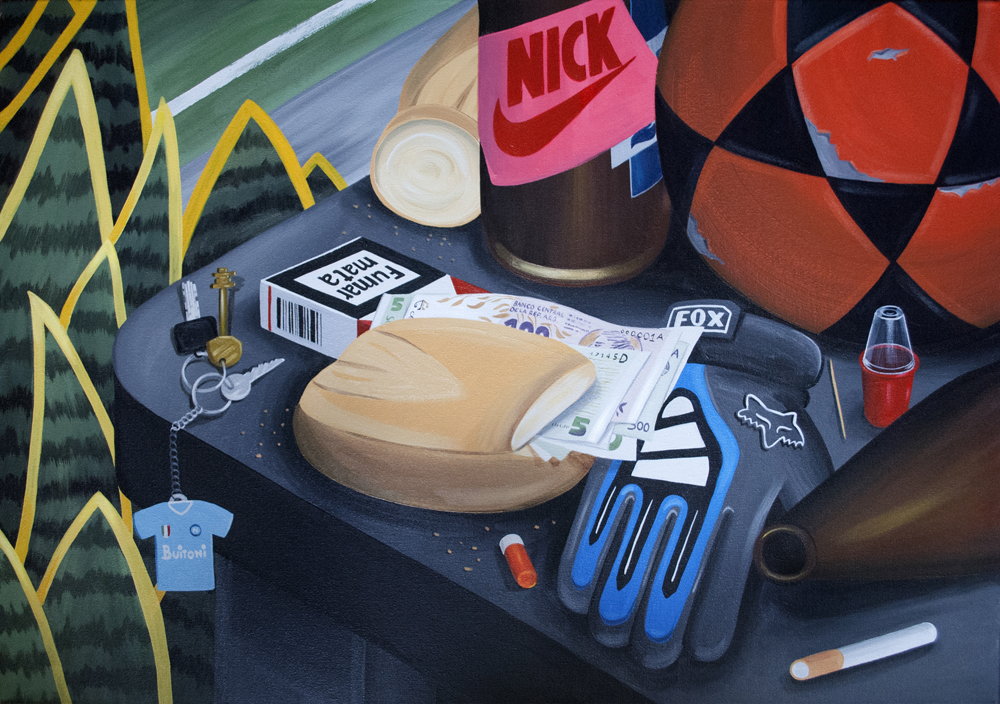 In the end, what happens on the field doesn’t really matter. It’s about getting people together. It’s this social aspect that endears Martin to his art too. It’s an interaction, a lynchpin of the friendship he shares with his friends and also an avenue to make new ones.

If these are the similarities, then what are the differences? There’s one that stands out for Gordopelota: “The main difference is that I can get paid by doing art, but I pay to play fútbol.” That’s the thing – we are always willing to give to that thing which gives us so much in return.

Martin has been able to make a living from the game, but in return has given it, and us, something invaluable – a new way to see it. Sure, it’s not news that the amateur game carries the torch for the true spirit of authenticity, but we might never have been able to see it like this, certainly not in Latin America, without his paintings.

They are a window into a world most of us, especially in Europe, would love to be a part of. As soon as we know we won’t make it into the stadiums, we hope that football will always be a part of our lives, that it will give us the same joy and allow us to feel the same excitement and sense of mischief as it did as children.

Only we are adults now, and because of this fact, his work is even more poignant. It’s a reminder of why we loved the game in the first place – before we even knew it could be a career. It was sheer joy, untouched by anything else around us. It was uncorrupted, beautiful and ephemeral. Martin Gordopelota’s work is all of those things too. That’s why we salute you.