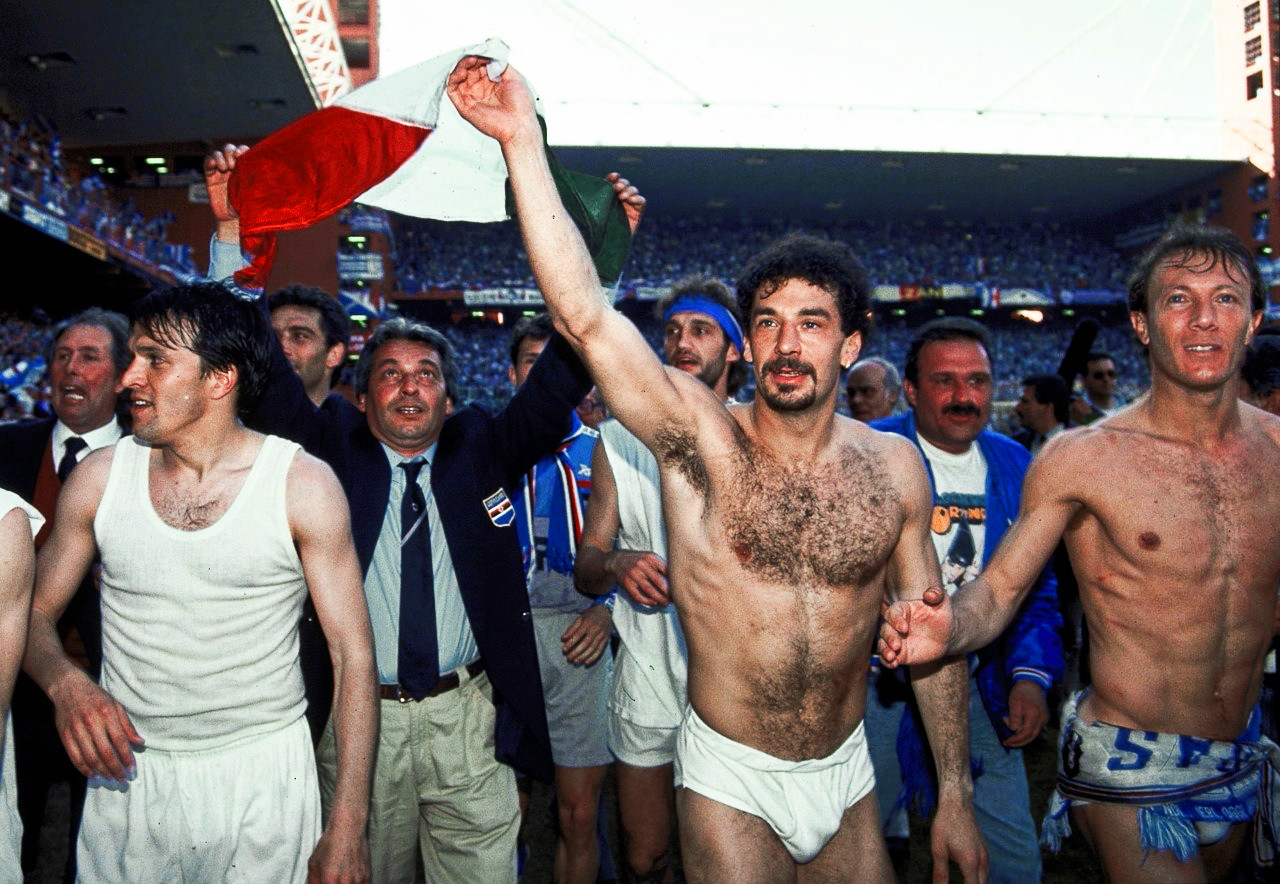 In part two of a four-part series looking at the career of the iconic Gianluca Vialli, Dan Davison recalls his memorable Sampdoria years, which later set him up for brilliance at Juventus.

The 1990/91 season was the greatest in the history of Sampdoria. And the truth is, for the romanticism that Italian football has come to be associated with in the eyes of many, it is one of the greatest Serie A seasons of all-time. On the back of their success in the Cup Winners’ Cup, Samp won the trophy they had coveted for so long – the Serie A title. And there was one man who they would not have been able to achieve this without. It was, of course, Gianluca Vialli.

Samp had signed USSR international Alexei Mikhailichenko in the summer of 1990 but in general they now had a much more Italian-dominated team, despite having a foreign manager. Gone were the British invasion days of Graeme Souness and Trevor Francis, and the defence was entirely Italian. Perhaps this fostered a good understanding amongst the back line, as Samp conceded a mere two goals in their opening seven games of the 1990/91 campaign.

The defence may have been solid, but Vialli wasn’t looking quite so on-form, failing to score in any of those seven games. Starting to get frustrated as strikers tend to do on a barren run, the breakthrough finally came in a 4-2 win over Tuscan club Pisa, with Vialli scoring the third. As is so often the case with top-level strikers, one goal was all Vialli needed to get his confidence back and three more quickly followed in the next two games, against Napoli and Genoa. He scored the winning goal in a comeback against Roma and twice in a 3-1 victory over Inter. Vialli was flying and, with only one defeat in their opening 13 games of the new Serie A season, so were his team.

Inter, along with their rivals AC Milan, were still considered as favourites to lift the Scudetto and so Vialli’s two goals to give Samp a 3-1 victory were of huge importance. With their German trio of Jürgen Klinsmann, Lothar Matthäus and Andreas Brehme, they had started the season looking a real force, but it was Vialli who had played like a Ballon d’Or winner that day.

Strangely, though, Samp followed their well-earned victory over Inter with consecutive losses to Torino and Lecce. Perhaps complacent, it was clear after the second of those losses that Il Doria needed to regroup and channel their early season form. That’s where the manager, Vujadin Boškov, and the squad’s key players, such as Vialli, came in. 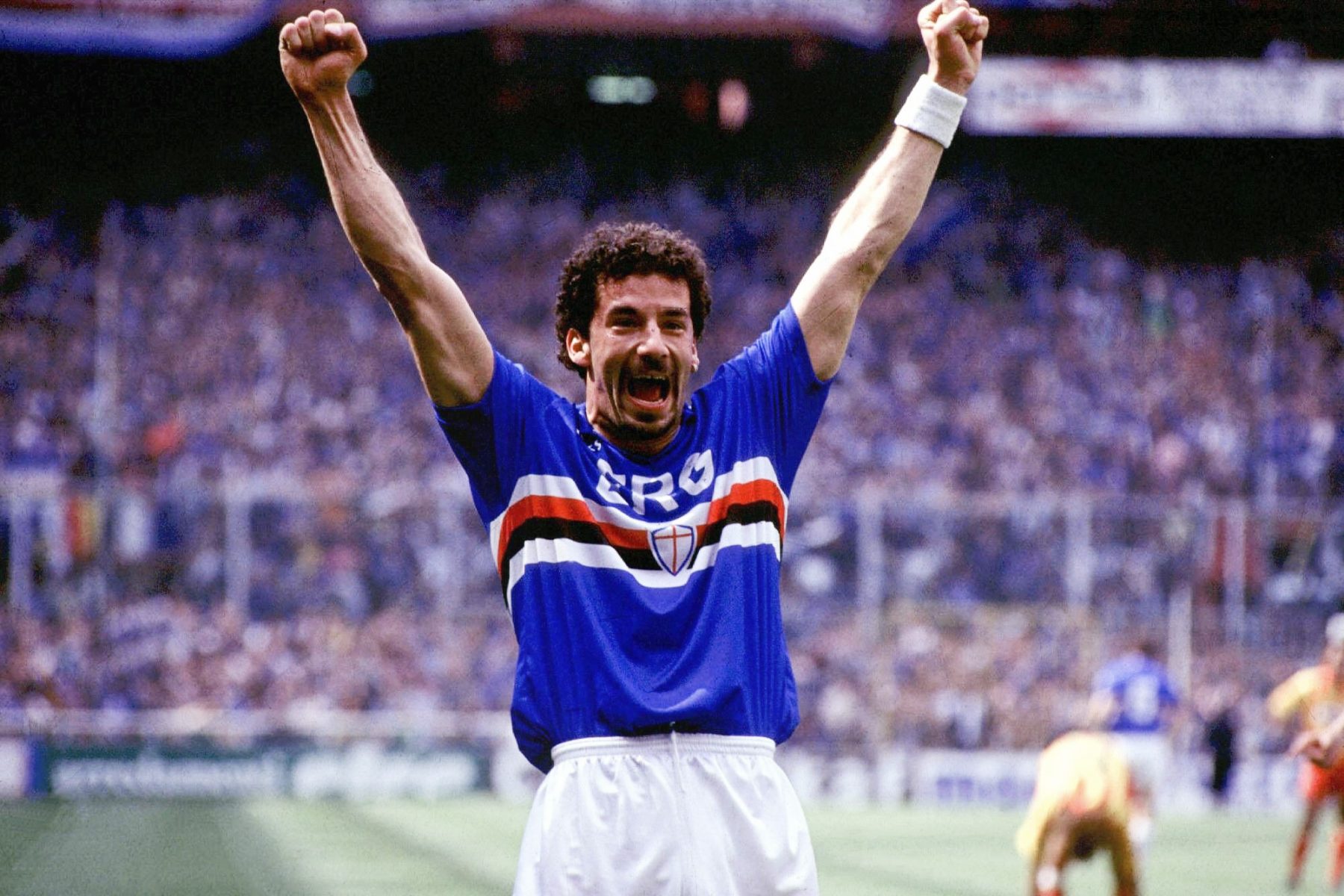 Part I  |  Gianluca Vialli: the rise and early Sampdoria diaries

Boškov, who Vialli has since described as “a great psychologist”, rallied the troops, and assigned more on-pitch responsibilities onto the shoulders of the likes of Gianluca Vialli and his friend Roberto Mancini. After the second of those losses, Samp did not lose a single league game until the end of the season, also making it all the way to another Coppa Italia final.

If there’s one thing we all know from years of watching football, it is that if you have ambitions of winning a league title, a certain level of composure and calmness under pressure is necessary. And there was nobody calmer than Gianluca Vialli. With ice in his veins, he dispatched decisive penalties in wins over giants Juventus and Milan and scored once more against Pisa. The following game would be when everyone was going to find out if Il Doria were truly capable of winning the title.

They faced the reigning champions, Diego Maradona’s Napoli. Although the Argentine scored a penalty, it was not the playmaker who looked untouchable that night – it was Vialli. Controlling the game from the front and seemingly incapable of losing possession, Vialli had already scored twice before Maradona had his opportunity from the spot. Samp were out of sight and, in Maradona’s final season in Italy, Napoli were a shadow of the team that had won the Scudetto the previous season.

Suddenly there were eight games left and Samp found themselves in a position they had never been in before: the driving seat. After scoring in what turned out to be a disappointing collapse at home to Cagliari, Vialli scored what eventually was the winning penalty against Bari before notching again at the San Siro in the crucial game against title rivals Inter.

In what was surely the most high-pressure match in the history of the club, Vialli was supreme, and a goal was the least he deserved. With three games left, that win at the San Siro all but secured Sampdoria their first ever title. Vialli was to score once more in a comfortable home win against Lecce in the penultimate game to seal the deal. Sampdoria had disrupted the Italian football establishment. They had won the Scudetto. 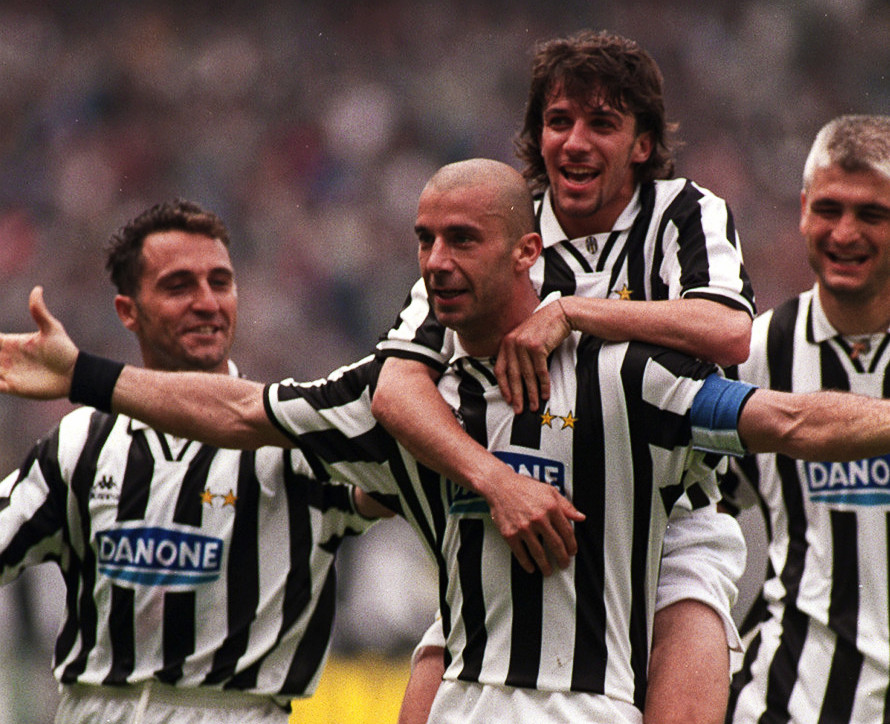 Gianluca Vialli finished the season as the league’s top scorer, with three more goals than second-placed Lothar Matthäus of Inter and seven more than his club’s next best, Mancini. As well as winning the Capocannoniere, he had been the league’s best player and was now courted by pretty much every top club in Europe. But Vialli was playing for the team that had just won what was surely the best league in the world at that point. And he was playing for a manager whom he respected greatly. Why would he leave?

Winning the title meant that Samp qualified for the following season’s European Cup, and the first round saw them drawn against Norwegian champions Rosenborg. A thumping 5-0 first leg victory saw the Italian side through, with Vialli scoring the first of Samp’s goals in a late comeback in the second leg. In the second round, Samp were drawn against Hungarian giants Honvéd. The first leg was away from home this time and, despite a late red card shown to the Honvéd goalkeeper István Tarlósi, Sampdoria lost. Vialli looked disturbed by the hostile atmosphere but the truth is, few of Il Doria’s players performed. The second leg now took on huge importance.

The best players rise to the biggest occasion and, once again, Vialli delivered. With Attilio Lombardo having given the home side an early lead, Vialli grabbed the game by the scruff of its neck, scoring once in the first half and again after half-time. Like many of the greats, he always seemed to perform better in front of his home crowd.

Sampdoria made it to the group stage where they were drawn with another Eastern European giant in Red Star Belgrade, as well as Panathinaikos and Anderlecht. La Samp got off to a winning start in the group against Red Star, the best team from manager Boškov’s homeland, Yugoslavia. Vialli scored Samp’s second goal to settle the growing nerves. He also scored both of Il Doria’s goals in a closely fought 3-2 defeat in Belgium to Anderlecht.

That loss, though, proved to be the only one for Sampdoria in the group stage. Anderlecht were dispatched in the reverse fixture and Red Star beaten once more. Two draws against Panathinaikos meant the seemingly impossible had happened: Sampdoria had topped their group, finishing two points above Red Star and Anderlecht and four points above winless Panathinaikos. They were now in the final of the European Cup. 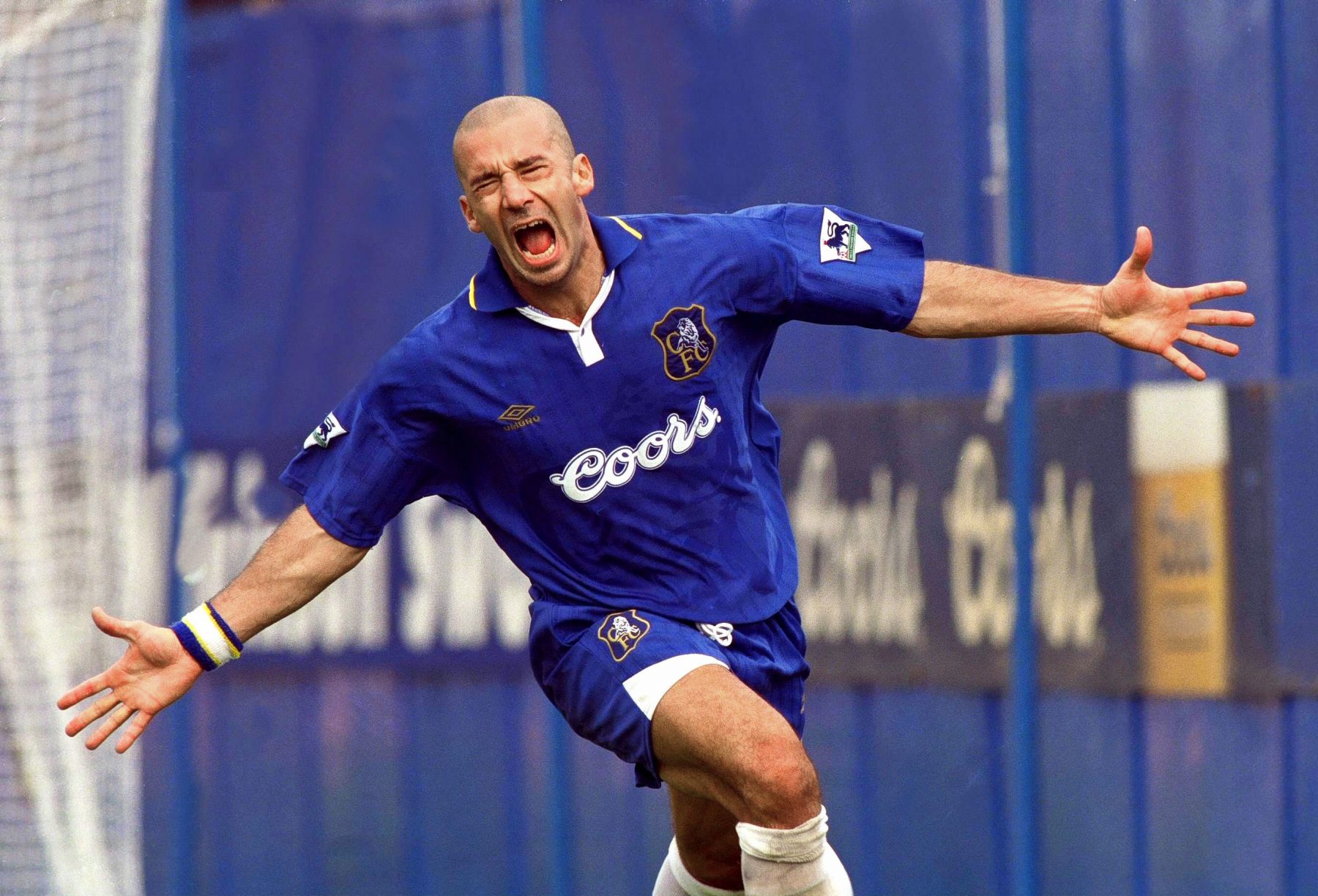 Their opponents in the final were to be the much-fancied Barcelona Dream Team, the mastermind of manager Johan Cruyff, who had come through a group that boasted Sparta Prague, Dynamo Kyiv and Benfica. If Vialli was Sampdoria’s star, Barça had too many to choose from. Ronald Koeman, Pep Guardiola, Michael Laudrup – the whole team had supreme technical ability. Perhaps their biggest star, like Sampdoria, was also playing in the forward line: Hristo Stoichkov.

In the early-90s, Vialli and Stoichkov were undoubtedly two of the best forwards in the world, but neither could find a way past some world-class defending in an extremely tight final at Wembley. With Nando and Albert Ferrer to break through and Koeman playing as a sweeper, Vialli found it difficult to find space. Ferrer was so impressive that Vialli went on to make him one of his first signings as Chelsea player-manager in 1998.

The deadlock was not to be broken; extra time was necessary. In a moment that perhaps defined the future of the two respective clubs, it was Barcelona who finally made the breakthrough. Eight minutes before the end, Samp conceded a free-kick. Barcelona’s Ronald Koeman, notoriously deadly from set-pieces, stepped up and scored. Sampdoria, who surely had half a mind on penalties by that stage, were stunned. It was Barcelona who were crowned European champions for the first time.

Despite their historic European campaign – or maybe because of it – Samp’s defence of the Scudetto was a failure. An opening day defeat to Cagliari set the tone for the season as consistency couldn’t be found. Vialli scored Samp’s first in a 2-2 home draw with his old team Cremonese in the final game of a season in which they finished sixth. With expectations now raised, Boškov fell victim to his own success and was forced to leave at the end of the season, despite the European Cup final.

Vialli also felt he had gone as far as he could with Sampdoria and, having refused to listen to offers during the previous summer, was once again subject to plenty of interest in the summer of 1992. In the end, it took a world record fee of around £12.5m at the time for Juventus to prize him away from the Stadio Luigi Ferraris. The Bianconeri, with their team already full of superstars, had no limits on what they could achieve. Gianluca Vialli was ready for the challenge.