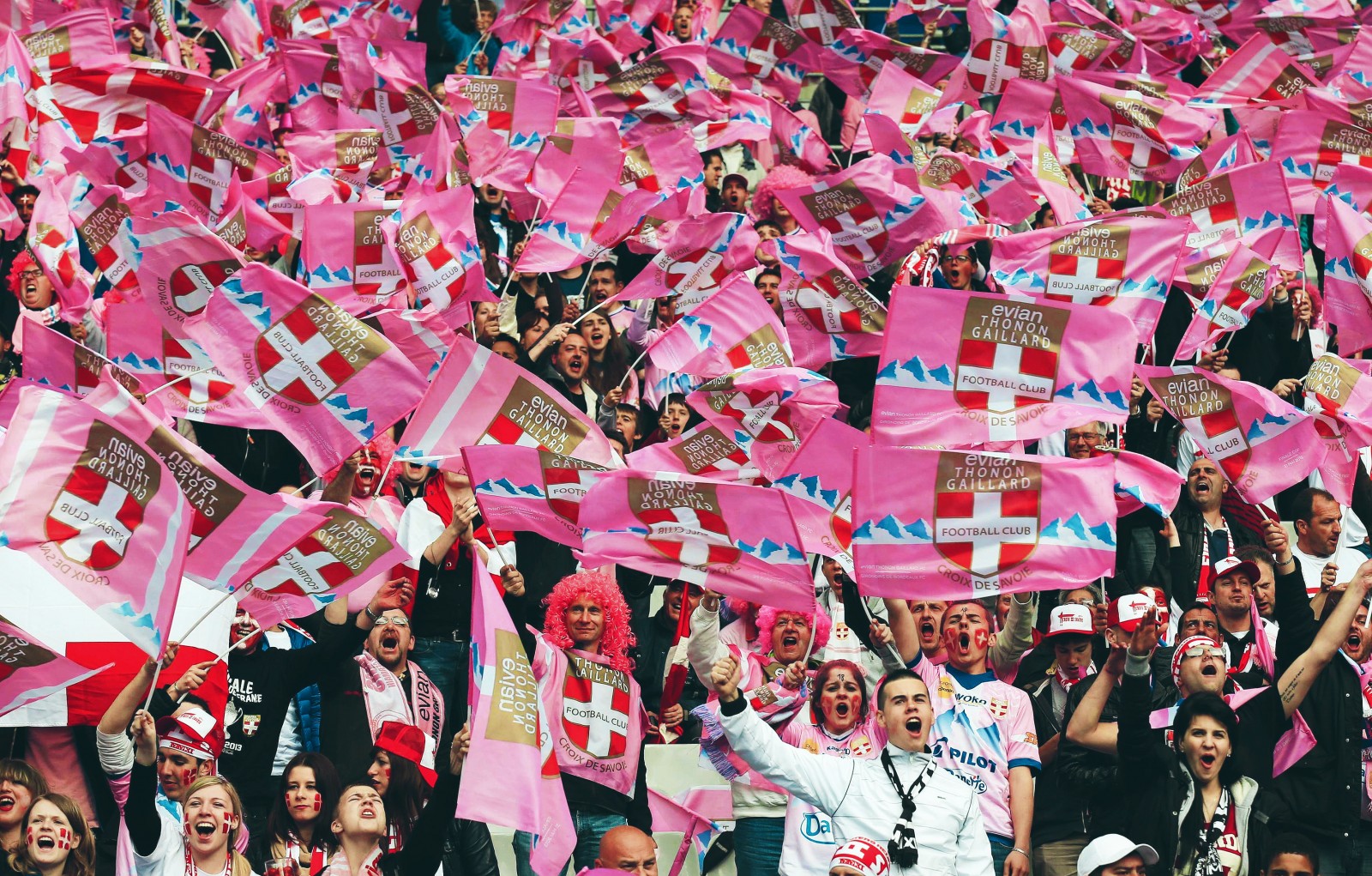 The town of Thonon-les-Bains sits beside Lake Geneva. It finds itself situated in the Haute-Savoie department of the Rhône-Alpes region in eastern France. Once upon a time it was the historical capital of Chablais. It is a part of the world which is built on water and rock.

Driving along the relatively sleepy Avenue du General de Gaulle, the Stade Joseph-Moynat announces itself by surprise. A towering floodlight pylon appears almost from nowhere, set back from the road by around 20 yards or so. It sits behind a set of double gates which could easily pass for the entrance to a builders’ yard or a transport depot. A signpost for the stadium is partially covered by the sprawling arms of an overhanging tree.

The Stade Joseph-Moynat is a multi-sport municipal stadium. Surrounded by a running track, it is home to the Thonon Black Panthers, who compete in the top division of the French Domestic American Football league. The Joseph-Moynat was also the birthplace of Evian Thonon Gaillard FC. Evian was arguably a football club of convenience. It was also a football club which rapidly ascended to the promised land of Ligue 1.

A 2003 merger between two long-running rivals, FC Gaillard and FC Ville-le-Grand, served to create a new football club, Football Croix-de-Savoie 74. Promotion from the regionalised fourth divisions of the French football pyramid came swiftly. By 2006, however, the new venture had suffered a serious setback with relegation befalling the club.

In 2007 came a new merger when, with one eye on the larger stadium on offer in Thonon, Football Croix-de-Savoie 74 absorbed another local rival, Olymipique Thonon-Chablais. The new entity, initially going by the name of Olympique Croix-de-Savoie 74, left the town of Gaillard behind for its new home in Thonon; the Stade Joseph-Moynat.

The 2007/08 season brought immediate success. Clocking up 108 points, albeit within the more unusual four points for a win, two for a draw and one for a loss environment, Olympique Croix-de-Savoie 74 swept to promotion back to the Championnat National.

An affluent part of France, the Rhône-Alpes had long been a barren land when it came to top-level professional football. A part of the country which has always been geared up for winter sports, football had – much like in the French Basque region – passed it by somewhat. Geographically speaking, Lyon and Saint-Étienne to the west, beyond the Alps, remain the closest French giants.

A season of consolidation followed their 2008 promotion with an admirable fifth-place finish, before another even more seismic alteration to the club took place. In the summer of 2009 the owners of the Evian water empire, Danone, took an interest. With not inconsiderable financial backing a new dawn arrived, along with another change of name to reflect their new association. Evian Thonon Gaillard FC (ETG) came into being.

The 2009-10 campaign saw ETG crowned as champions of the Championnat National. In a three-up, three-down system ETG finished a massive 22 points ahead of fourth place. Promotion to Ligue 2 was won with multiple games to spare and the title was clinched ahead of the legendary Stade de Reims, who were the runners-up.

The summer of 2010 was a pivotal one. With the Stade Joseph-Moynat deemed unsuitable for the upper professional leagues yet another move of ground had to take place. The new destination ETG were to head for was wide open to debate and conjecture. Hostility and rancour would also be stirred by the club’s requirements for yet another new home. With no suitable stadium in either Evian or Thonon, Patrick Trotignon, ETG’s chairman, had to look elsewhere. Controversially, Trotignon’s favoured ‘elsewhere’ was over the Swiss border in Geneva.

With Geneva just 22 miles from Thonon – despite being in an entirely different country – it is the closest and most accessible big city, however the concept of moving a second-tier French club into a major city in Switzerland brought an avalanche of problems with it.

For a start, the Stade de Geneve, the intended new home of ETG, was also the home stadium of Servette FC, the fallen megalith of domestic Swiss football. The 17 times champions had themselves befallen bankruptcy in 2005 and been forced to regroup in the third level of their domestic league pyramid.

In 2010, Servette were still in a state of precarious recovery. While they had won promotion back to the second tier and were steadily building a side that could challenge for a return to the top flight, there were also concerning signs that financially the club was once again in peril. An upwardly mobile French football club with the backing of Danone was the last thing Servette needed to be sharing a home with. 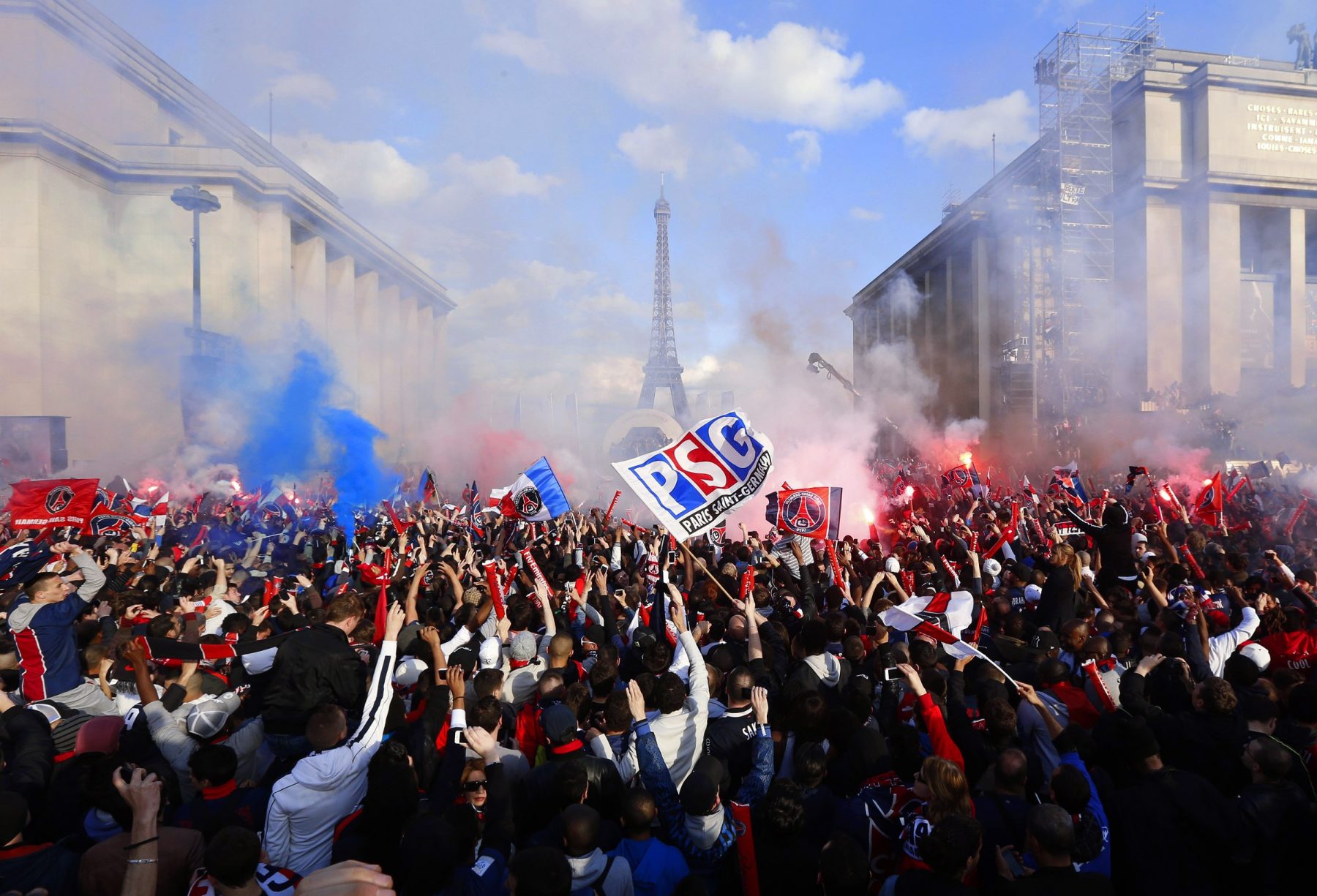 Read  |  The last of the ultras: Paris Saint-Germain and the repression of football fans in France

Should ETG have arrived in Geneva and should they have achieved their goal of Ligue 1 football, thus bringing the likes of Paris Saint-Germain, Lyon, Marseille and Monaco to the city for high-profile French league fixtures, then Servette FC would have been quite entitled to have feared the worst over their future.

The French Football Federation duly approved the move. ETG petitioned the Geneva State Council without much in the way of resistance, and even the owners of the Stade de Geneve elected to refute Servette’s suggestions that sharing the stadium would bring issues such as pitch damage and fixture clashes. The city of Geneva seemed to be willing to welcome ETG with open arms. However, UEFA remained as the final – and rather large – hurdle for ETG to clear.

UEFA’s 17-strong executive committee deliberated and subsequently denied ETG in their quest to relocate to Geneva. The club instead moved to the Parc des Sports in Annecy – another multi-sport stadium even further away than Geneva, situated over 50 miles away from Evian by road.

If ETG’s problems in finding a suitable home had reached the ridiculous, then their on-pitch efforts had achieved the sublime. In 2010-11, at the first time of asking, ETG stormed to the Ligue 2 title. Promotion to Ligue 1 was theirs. For the Danone CEO, Franck Riboud, the Honorary President of the club since 2009, it had been a perfect storm on the pitch. Off the pitch, however, began the divisions, as with success came the fight for control.

The civil war behind the scenes took a further two years to play out. During that time ETG continued to draw attention to their on-pitch achievements. A ninth-place finish in their debut Ligue 1 campaign in 2011/12, inclusive of finishing one position higher than Marseille, was followed in 2012/13 by a run in the Coupe de France, which took the club all the way to the final itself. At the Stade de France, against Bordeaux, ETG exchanged blows from beginning to end, before succumbing to a last-minute winner in 3-2 defeat.

Evian’s story was remarkable: just four years beyond promotion from the amateur fourth divisions to a near miss in the final of the Coupe de France, with top-flight football being obtained within half that time. ETG had travelled literally and figuratively via Thonon, Annecy and a flirtation with Geneva to national prominence and global notoriety. ETG seemed to be blessed with a blank canvas and a clear horizon.

That blank canvas might still have been transformed into something longer lasting. Before 2013 had drawn to a close Trotignon had stepped down as chairman and Riboud’s efforts to gain greater control of the club had been met with a door being slammed in his face. With Esfandiar Bhaktiar and Tumbach Richard having ownership of 52 percent of the club, making them the combined majority shareholders, Riboud was blocked in his attempts to gain a greater foothold in his attempts to conquer ETG.

From Riboud’s position, he was willing to fund ETG further than the estimated €30 million a year Danone were rumoured to be bankrolling them. Bhaktiar and Richard, on the other hand, either felt that they were protecting the club from big business influence, or holding out for a bigger pay-day in an era of billionaire buy-outs of French football clubs.

Either way, a watershed moment had been reached. In the wake of Trotignon’s departure as chairman, Riboud and Danone withdrew from ETG in 2014. The club was effectively on its own. The senior team budget was lost, while the commitment to the youth programme remained in place to an agreement of 2017.

Within a year ETG slipped to relegation from Ligue 1 as 2014/15 saw them return to Ligue 2 after a four-season stay in the top division. The wheels then systematically fell off and a second successive relegation was suffered in May this year. ETG’s descent was as swift and dramatic as its rise. With a reported debt of €8 million, the next blow was receivership. Administrative penalties saw a further relegation back the amateur ranks of the regionalised fourth divisions. All of this just 12 months after kicking their last top-flight ball in anger.

Rumours of Danone and Riboud returning as a saviour of the club amounted to nothing and a statement of a lack of intent soon followed. Despite being given a two-month probation period with which to save itself, ETG announced that its senior side would not be competing in the 2016/17 season. The club, at senior levels at least, had all but folded. From Ligue 1 to oblivion in one calamitous year.

ETG continue to live on in the form of their youth side and an affiliated women’s team. The best case scenario is a reformation of one of the previous incarnations of the side, perhaps even back in Thonon one day. In reality, the thinning remnants of the club appear to be on borrowed time.

A daggers-drawn effect between warring factors over the control of ETG brought about its eventual downfall, but they had scaled some unimaginable heights by reaching Ligue 1 and a Coupe de France final. A barren land in footballing terms was brought to life for a short period of time, and they almost took themselves over the border and into Switzerland. ETG continued to reinvent themselves, yet they never played in the town with star-billing within its name.

ETG were an apparition of sorts. A mirage. Something that appeared in the corner of your eye but then vanished a soon as you saw it. A trick of the mind maybe? It was football, but not as we know it.