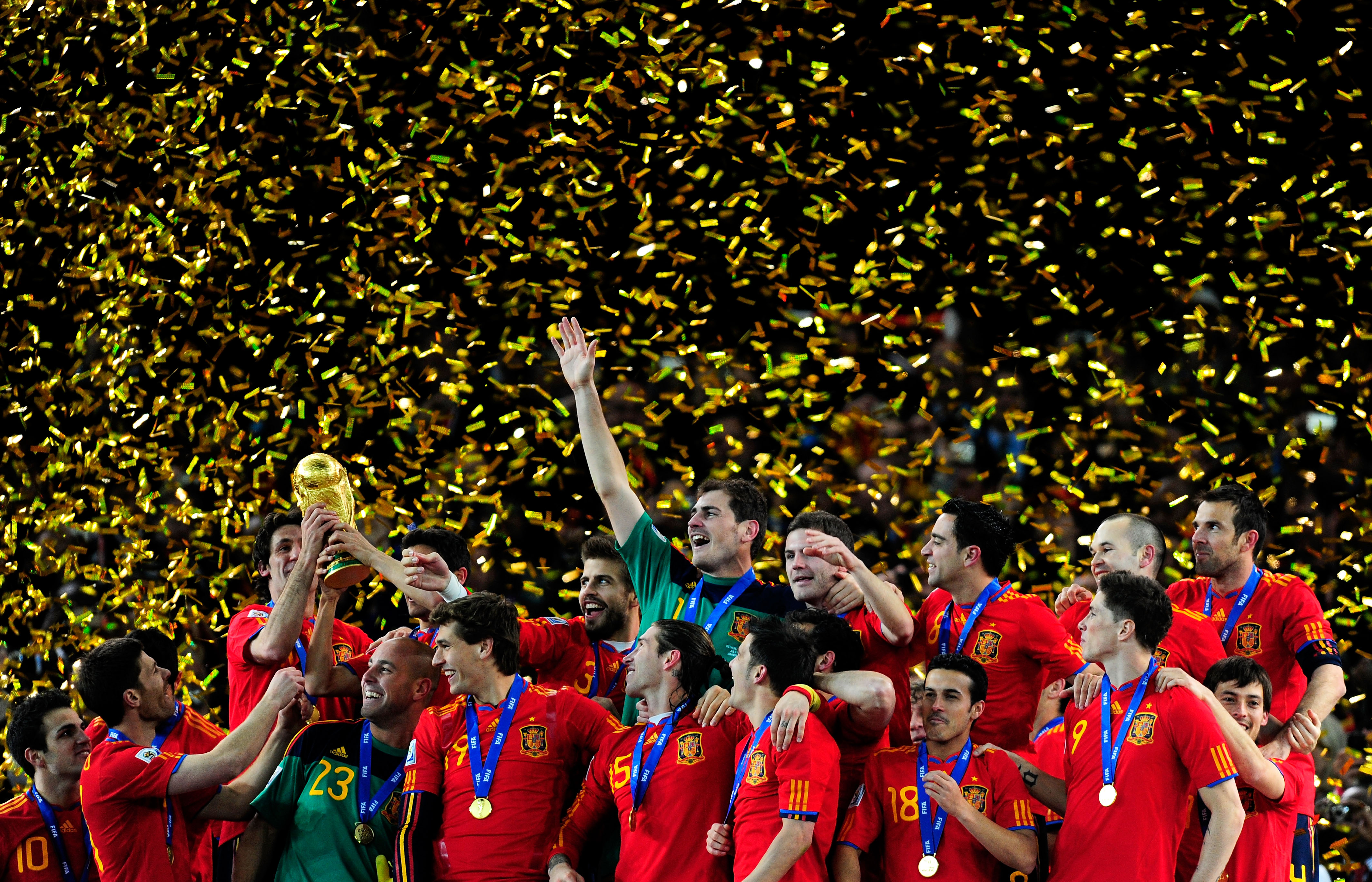 AS TV BECOMES increasingly saturated by football coverage, there is a chance that fans might take for the granted the mortality of footballers’ professional careers and the lifespans of certain teams. Watching the game’s greatest players was a rare treat for previous generations but it is now a weekly habit for many. Each weekend we can watch Liverpool’s Luiz Suárez bewitch a defence and then switch over to see Cristiano Ronaldo or Lionel Messi score yet another hat-trick. After a while the extraordinary can seem ordinary and familiarity can breed, if not contempt, complacency.

A certain overexposure can extend to international teams, in particular world and European champions Spain. Watching Spain play, and win, in major tournaments has practically become a summer event for football fans. The upcoming World Cup in Brazil is the fifth time in the past six years they have featured in an international competition. Aiming for an unprecedented fourth consecutive title, the team, naturally, is widely respected. However, there is a sense that respect does not extend to affection or even adequate appreciation of the team’s style, the magnitude of their achievements and the road Spain took to reach such heights.

During Spain’s last major tournament, Euro 2012, the Telegraph conducted a poll on their website, asking: “Is watching Spain boring?” Of the 1,243 people who voted, 66% said they were. Spain monopolised possession as opponents entrenched themselves at the edge of their penalty box, looking to spring a counter-attack. Games could quickly reach a sense of stalemate. However, despite some nervy moments against Croatia and a penalty shoot-out victory over Portugal, Spain still progressed comfortably to the final to face Italy.

The Azzurri were the only team to score against them, in the opening group game, a 1-1 draw, and with in-from players such as Andrea Pirlo and Mario Balotelli, combined with a strong defence, an upset appeared possible. Spain won 4-0. The final score may have been slightly skewed as Italy suffered injuries, but Spain were truly imperious in clinching an historic third successive international crown.

Midfielder Xavi recently acknowledged the popular labelling of his team as boring, saying: “It’s true that we were criticised for being boring at Euro 2012, yet that boring team beat Italy 4-0 in the final.”

If such a dominant victory vindicated Spain’s style and rebuked any suggestions of sterile football, last summer’s defeat to Brazil in the Confederation’s Cup final seemingly had the reverse effect. Spain were crushed 3-0 by the hosts. After the 7-0 aggregate pummelling Bayern Munich doled out to Barcelona in the Champions League, the consensus was loud in proclaiming that tiki-taka’s dominance was dead.

Spain struggled to cope with Brazil’s imposing tactics. The hosts, buoyed by a fervent crowd, played with manic aggression and intensity, repeatedly forcing their opponents into uncharacteristic errors. They suffocated Spain’s play, hunting in packs and preying on any sign of vulnerability. However, while the Spaniards were gracious in defeat and Brazil were worthy winners, the margin of victory was slimmer than the final score suggests.

Yet La Furia Roja’s aura of invincibility, built up over so many summers, had been shattered. Serial winners such as Xavi and Andrés Iniesta seemed fragile, unable to pass their way around the brute force of Brazil. The defeat could easily be construed as the beginning of the end of modern football’s greatest international team.

Carles Puyol, the former defensive stalwart, is now retired. David Villa and Fernando Torres, previous lynchpins of success, are in decline. Other key protagonists like Iker Casillas and Xabi Alonso are the wrong side of 30. Spain enter this World Cup as relative outsiders to retain their title.

The country still has an incredibly talented squad and, if fit, a more direct option in the form of striker Diego Costa. However, this is probably the last World Cup for Xavi, Iniesta, Casillas, Alonso, Torres and Villa. If Spain can progress through a tough group and overcome the world’s best on the way to final, in the process effectively managing the challenges of the climate and the logistics of travelling across the best part of a continent, will the tag of being “boring” return?

In all likelihood, the Spanish players could not care less. As Iniesta said, during Euro 2012, “Football’s so great because not everyone likes the same thing, we don’t have to all agree on everything.” However, should Spain’s brilliance override any questions of perceived boring play? And what does it say about society when people make such judgements in the face of sustained quality and success?

“I prefer to play football, not just to get the ball forward at the first opportunity. I try to wait for, or to create, the best opportunity for the right pass.” That is a quote from Spain manager Vicente Del Bosque, speaking in 1981, taken from Graham Hunter’s book Spain: The Inside Story of La Roja’s Historic Treble. At the time Del Bosque was a Real Madrid midfielder, in the mould of Sergio Busquets, and nearing the end of his career. The future national team manager was explaining his playing style to the Madrid fans, for whom he had become something of a boo-boy.

Del Bosque could just as easily be talking about the current Spain side’s philosophy. The team has boasted some of the most technically proficient players to have played the game, playing in a style embodied by Xavi. His prime, like that of the Spain team, is deemed to have passed, and managing his playing time effectively could be crucial in Brazil. He is still the brain of one of football’s most intelligent teams. Why would a footballer with such technical ability and who has been taught from childhood not to recklessly use the ball, play any other way?

Spain may place an imperative on ball retention, but if their opponents are unable to dispossess them, or chose not to, should the sole responsibility for the game reaching a stalemate lay with them?

Former Liverpool midfielder Graeme Souness also speaking in Hunter’s book, does not believe so: “Those who criticise Spain for their manner of winning now know nothing about football. We were hugely successful at Liverpool and we were taught, from day one, to keep the ball. Don’t try a pass through the eye of a needle; win the ball, circulate it, start again and again if you have to, but seek the right opportunity. That’s what Spain do excellently today.”

Perhaps it is over-familiarity that has made some football fans tire of Spain’s domineering style. The great international teams of the past did not experience such exposure. Between 1951 and 1956, Hungary played 59 games and only lost once: the 1954 World Cup final, in which they were defeated by West Germany. Games at the time were more open, but this Hungary team are universally adored while Spain’s dominance in the modern era is greeted indifferently by some.

Modern society is consumed by instant gratification. The church of consumerism is dominant and it promises and promotes the idea that satisfaction is just a shiny new product away. When the effect wears off, there is another product to fill the void. Everything seemingly relates to right now. This obsession can extend to making judgements based only on the current, meaning appreciation of something more nuanced and greater can be difficult. The slow-burn is deemed boring, but the gorge is thrilling.

Perhaps this skews some fans’ enjoyment and appreciation of the current Spain side. In isolation, a succession of sideways passes do, admittedly, seem boring. However, when one considers more than just a few short passes, a different picture emerges. Consider the overall philosophy of Spain, to play such technical football with a genuine love and respect for the game.

Consider the technique required, the intelligence, the timing and the countless off the ball runs. The sustained harmony of a potentially divided squad, that has transcended provincial and club divides, a once vitriolic media, an expectant Spanish public and the manoeuvrings of the Machiavellian José Mourinho. They have the mental strength and physical stamina required to come back, season after season, summer after summer and keep winning.

This could be the last summer to watch some of their greatest players in action. In that 1981 interview Del Bosque also said: “I have been around for many years and I guess the fans tire of you, but that will change back.” Perhaps people will learn to love Spain when the show finally ends.