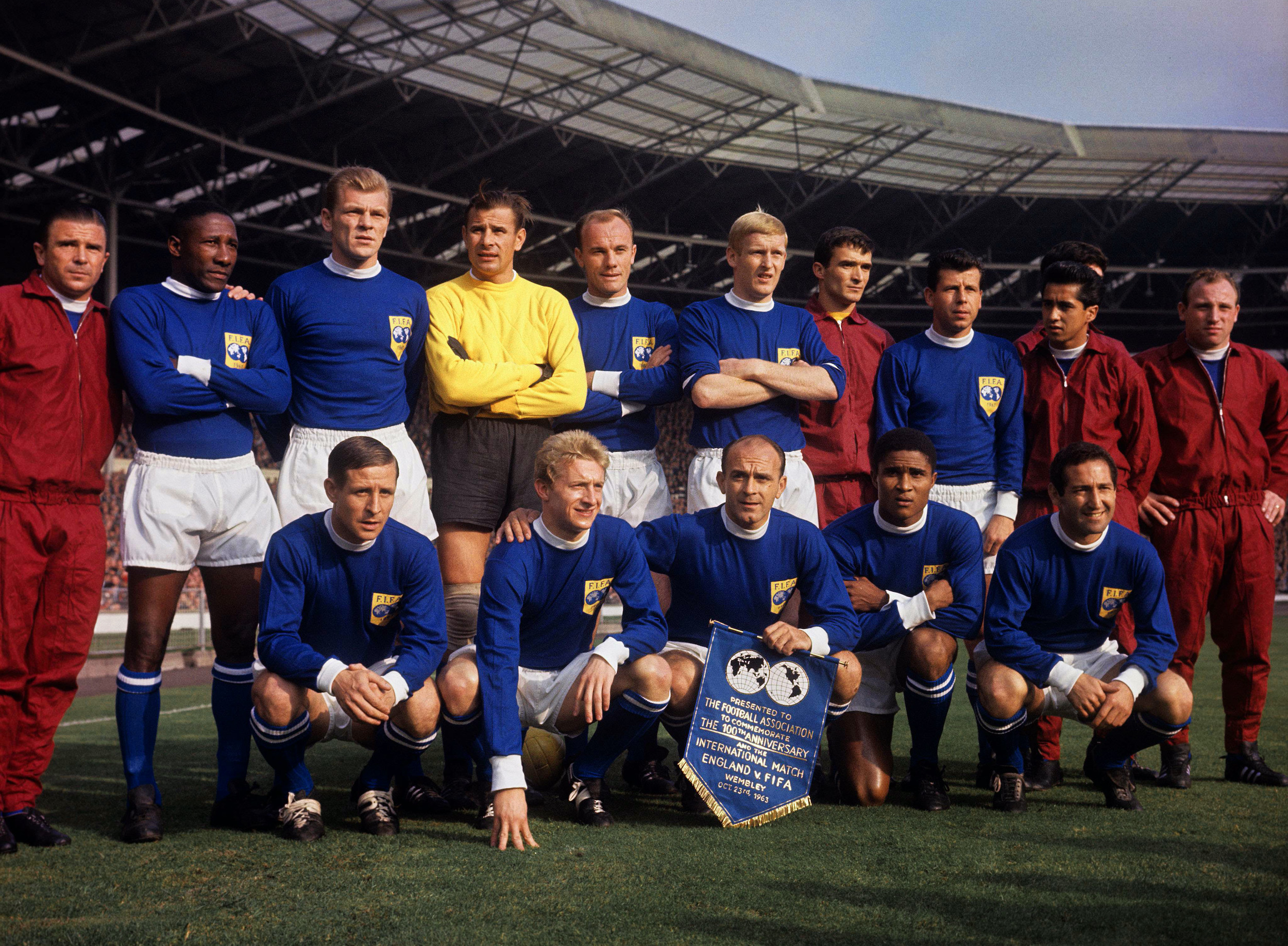 Time lends enchantment but there is no doubting the dewy-eyed nostalgia of the invitation international. Over a period of 25 years, England took on the combined strength of an entire continent and then the world. Three key matches would symbolise its rise, fall and eventual rebirth as a world power.

FIFA first fielded a team against England in 1938. The Rest of Europe was coached by Vittorio Pozzo, twice a World Cup winner with Italy, who was on his first visit to London since the Battle of Highbury in 1934. An infamous game between England and Italy that turned into a war zone, the 3-2 victory had cost the home side a broken nose and fractured arm.

The match was staged to celebrate the 75th anniversary of the Football Association. England fielded three survivors from the 1934 game, including captain Eddie Hapgood, the proud owner of said broken nose. Ironically, the FA were embroiled in a long-running dispute regarding amateur status and wouldn’t rejoin FIFA until 1946. It was one of many olive branches extended to them in an often stormy relationship.

FIFA seemed determined to recreate the previous summer’s tournament in France. The team, drawn from six countries, had all played in the World Cup. Five members of Italy’s winning side featured in addition to Gyula Zsengellér, who played for Hungary in the final.

Meanwhile, England were frustrating the FA International Selection Committee (FAISC), a behemoth that saw inconsistency as a virtue. Stanley Matthews had been selected at outside right and, in the four years since his debut, England had played 26 internationals. The FAISC had selected an unchanged line-up on just two occasions, and one of the game’s greatest wide players was about to win his 12th cap. Left-half Wilf Copping was the final veteran from the Battle of Highbury. The ex-miner and police reservist was England’s enforcer, specialising in the two-footed tackle – a useful weapon against opponents with a liberal interpretation of the rules.

A modest attendance of 40,185 at Highbury watched as the players were presented to the Duke of Kent and Earl of Athlone. The Rest played attractively on occasion but were no match for the peerless Matthews, who fed the industry of Tommy Lawton and Willie Hall. England swept to a 2-0 lead with relative ease by half time. Goalkeeper Aldo Olivieri kept them at bay with a string of fine saves, but couldn’t deny Len Goulden adding a third deep into the second half. The Times crowed at the delectable passing of Matthews and a 3-0 scoreline that failed to do England justice. For some inexplicable reason, it was decreed that England should play the Rest of Europe to mark the 90th anniversary of the FA in 1953. They had deigned to appoint Walter Winterbottom as manager in 1946 but was nominally a member of FAISC and still had to work with a list of players agreed by Committee.

Walter Nausch was his opposite number and brought a formidable reputation with him. Nausch was captain of the Austrian Wunderteam and learnt his trade under the guidance of the visionary Hugo Meisl. Nausch succeeded his mentor and continued to refine the fluidity of play so prevalent in Central Europe.

The 1953 vintage was moulded in the image of Meisl with seven players from the Danubian axis. The side was captained by fellow Austrian Ernst Ocwirk, a complete footballer who truly earned his ‘Clockwork’ nickname. Bernard Vukas and Branko Zebec were perceptive strikers running the left side channels. Although Croatian, they played under the banner of Yugoslavia, a fragile alliance of states created in the aftermath of World War One. Hungarian inside-forward László Kubala was the European Di Stefano playing for Hungary, the Czech Republic and Spain; a natural predator with a 75 percent strike rate for Barcelona.

The evergreen Matthews was recalled after a two-year absence. The 38-year-old may have been rewarded for his heroics in the FA Cup final, but would still appear intermittently for another four years. Other reassuring faces included Stan Mortensen and Nat Lofthouse but the defence looked tired and ponderous. Billy Wright, Jimmy Dickenson and Alf Ramsey had played in the USA debacle at the 1950 World Cup. Could they cope with the rapid passing game favoured by Nausch?

England were in trouble from the first minute as Vukas left his marker for dead. Bill Eckersley conceded a penalty duly converted by Kubala. Within five minutes England had equalised through Mortensen, but it was a short-lived respite. The Rest went 3-1 up as the great Giampiero Boniperti bagged a brace, assisted by the rampant Vukas.

Fate briefly smiled as a hideous mix-up between Navarro and goalkeeper Zeman allowed Jimmy Mullen to make it 3-2. Zeman, apparently injured, was now a schoolboy with the bellyache arguing for a substitute. He got his wish as Vladimir Beara replaced him for the second half. An unlikely recovery seemed complete when Mullen equalised at the far post. However, Kubala restored the lead with a rasping 25-yard drive. 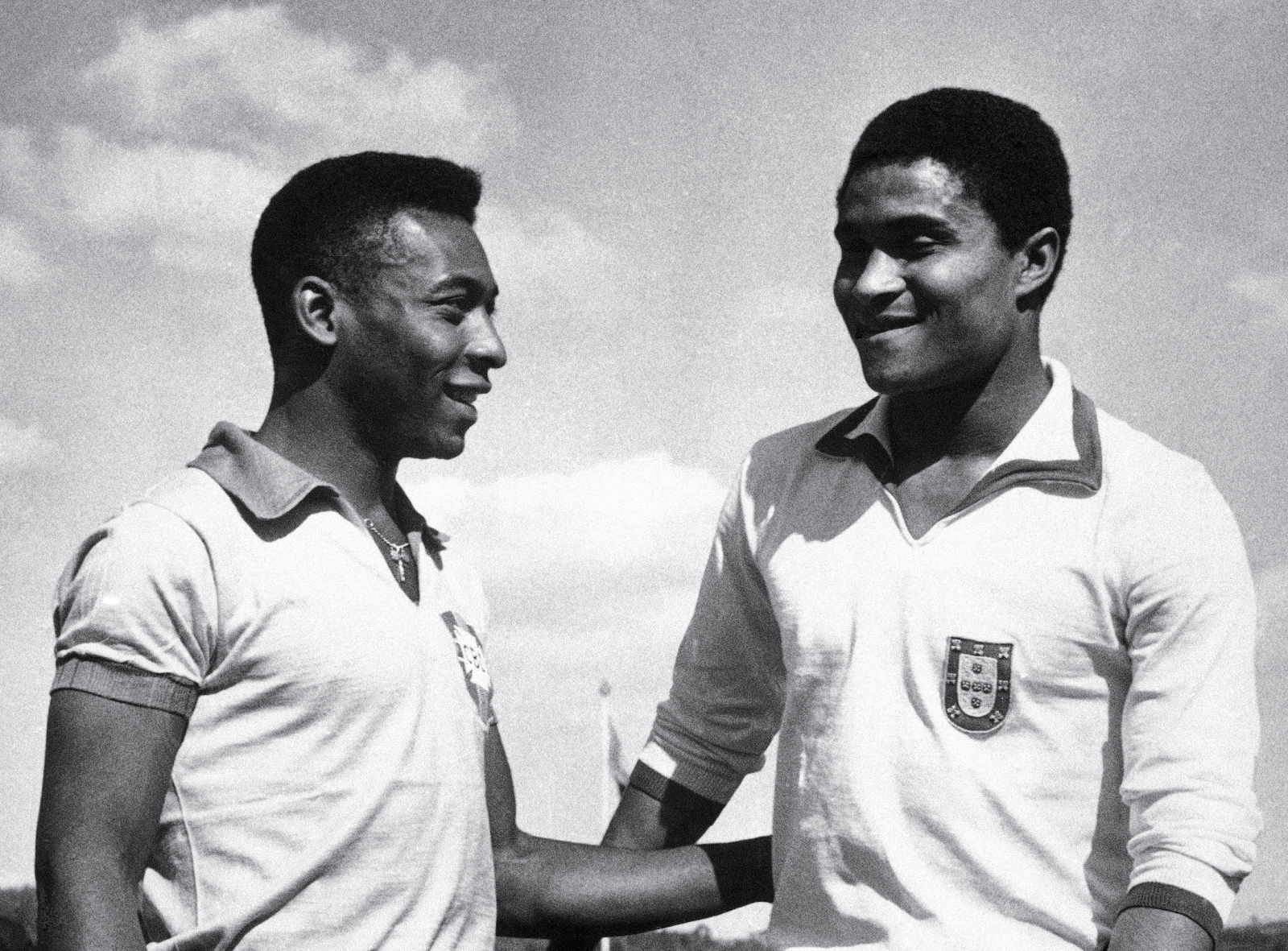 Ramsey converted a penalty in the last minute to save an unbeaten home record against foreign opposition. It was a result England scarcely deserved as a static defence was beaten by pace and movement. Fortress Wembley was under threat and, the following month, England were dismantled by a majestic Hungary with Ferenc Puskás as tormenter-in-chief. The warning shot had now turned into a full-frontal assault.

In 1963, Wembley played host to England versus the Rest of the World, a game staged to mark the FA’s centenary year. Newly-installed England manager Alf Ramsey grumbled about the number of substitutes allowed. He struggled with the concept and it wouldn’t be the last time they came to annoy him. The Rest looked classic and modern in navy blue shirts with white trim, the distinctive gold FIFA badge shimmering against blue as pre-match formalities were completed.

The well-travelled Fernando Riera was appointed as coach of the Rest. Guiding his native Chile to third place at the 1962 World Cup, Riera subsequently took charge of Benfica. He led them to the Primeira Liga title and a narrow 2-1 defeat against Milan in the European Cup final. However, the Rest barely needed coaching and appeared to be a self-regulating machine.

They looked equally impressive on-field and paper. All were fully paid-up legends: Lev Yashin swapped black for a yellow jersey in goal; four participants in the previous year’s World Cup final were present including right-back Djalma Santos, while a fantasy forward line of Raymond Kopa, Denis Law and Eusébio glistened like gold. The incomparable Alfredo Di Stéfano wore number nine; the ultimate have-boots will-travel genius. He made the most of his Latin roots, representing Argentina, Columbia and Spain in a distinguished career. Paco Gento of Spain completed the line-up at outside left, a member of Real Madrid’s original Gálacticos and integral to five European Cup wins.

For England, it was the first steps in a revolution born from the wreckage of Hungary ten years before. The humiliation burned in Ramsey’s memory and he was determined it should never happen again. Despite the grievous loss of Munich, England still mined a rich seam of talent. The slightly built but supremely agile Gordon Banks was a fixture in goal. Golden-haired defender Bobby Moore was on the edge of glory for club and country. Bobby Charlton, a sublime talent with a cannonball in either foot, led the line with ferocious intent. Playing just inside was Jimmy Greaves, a gifted striker for England who scored goals for fun when it didn’t matter but fell short of the barn door in the ones that did. 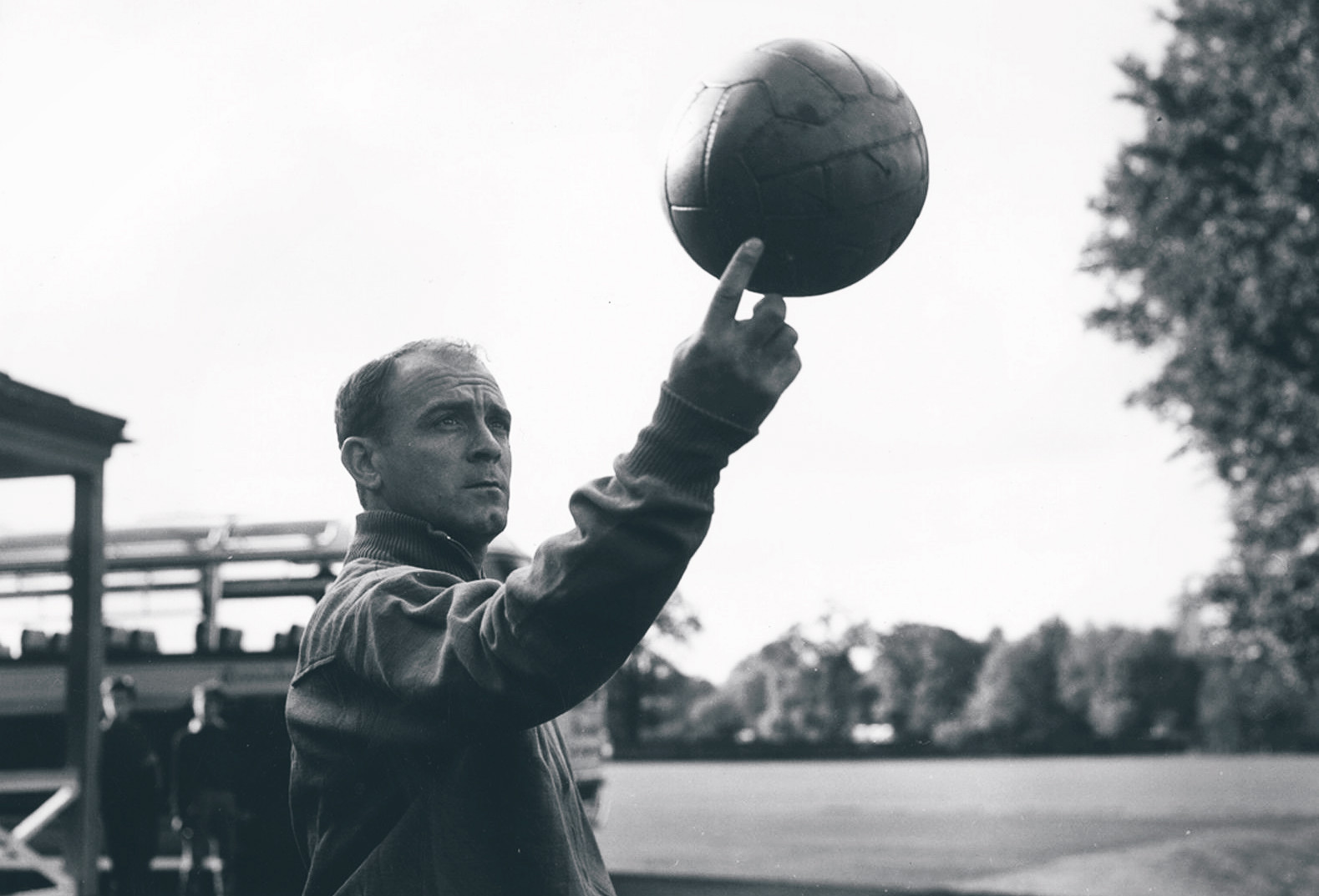 A capacity crowd enjoyed an open game that ebbed and flowed without an early breakthrough. Greaves was on fire and may have got a first-half hat-trick but for the heroics of Yashin. Both sides went close but the game remained goalless at half time. An embarrassment of riches was evident as the Rest made five substitutions for the second half. Uwe Seeler, Jim Baxter and Ferenc Puskas were among the subs, but their finishing still let them down.

The deadlock was finally broken in the 70th minute. Greaves was inevitably involved in the build-up as he had another shot blocked, though Terry Paine gratefully picked up the rebound. Sustained pressure from the Rest paid off seven minutes from time as Law turned sharply to score the equaliser. A captivating game was crowned in the dying minutes as man of the match Greaves scored the winner.

Matches against the Rest have sadly been overlooked as they sink deeper into history. Ironically, FIFA no longer recognise them as official internationals despite their obvious prestige. They were pivotal moments that tracked a shift in the game’s power base.

In 1938, England had defeated the world champions, Rest of Europe and Aryan-inspired Germany. There seemed nothing left to prove; the mother nation didn’t need FIFA and could dismiss the World Cup as a minor foreign tournament. By 1953, it was apparent the rule book so carefully written by the FA had been torn up; the world had not only caught up but raced past England. However, a new dawn beckoned in 1963 as Ramsey’s brand of alchemy began to take shape.

A corral of outstanding individuals with minimal preparation might not make a great team – they did lack cohesion but were certainly no worse than England teams in the pre-Ramsey era. Indeed, the players understood the significance of these games. Alex Elder, the Burnley and Northern Ireland left-back, was selected to play for the Rest of The World XI, however, he broke his leg a week prior to the game, Despite that, he still treasures the invitation letter. In his 2003 autobiography, Greaves spoke with awe of a move involving Seeler, Law, Puskás and Di Stéfano.

The concept of England playing the rest of the world has largely been relegated to charity junkets like Sport Aid. Crowded schedules and the money-spinning Champions League make the release of players impossible. But just imagine a modern FIFA select side lining-up against England – a team featuring Messi, Ronaldo, Kanté, Van Dyke and De Gea. Now that would be a spectacle.