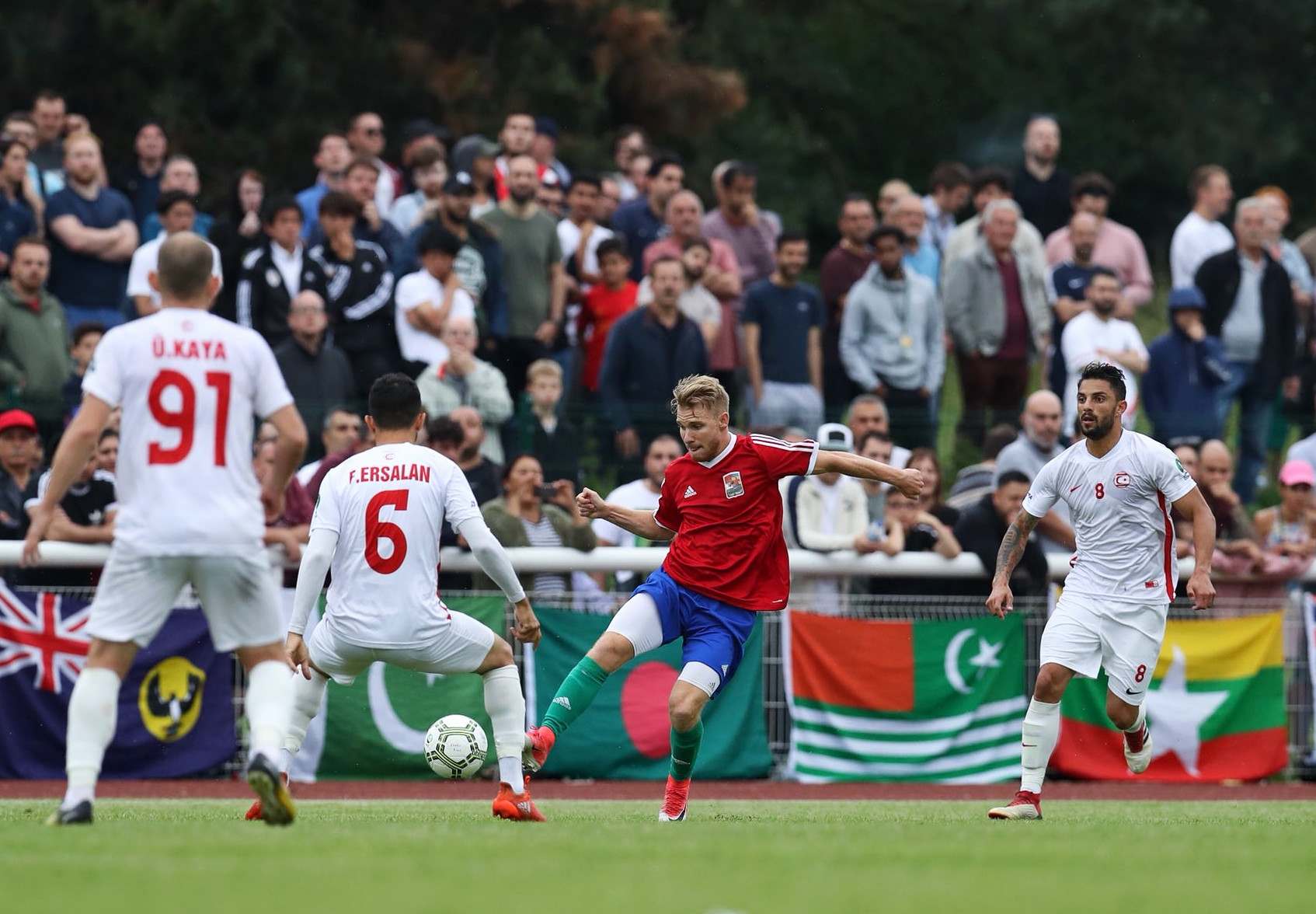 Standing behind the goal at Enfield Town’s Queen Elizabeth II stadium, I was engulfed by an explosion of noise, a cloud of pyro smoke, and a huge sense of occasion. A 2,500-strong crowd packed all four sides of the non-league ground as the players lined up for the anthems. The anticipation was palpable. But the spectators on Saturday were not just the usual Enfield diehards; Northern Cypriots, Turks and ethnic Hungarians had turned out en masse for the final of the 2018 CONIFA World Football Cup.

Both sides have exceeded expectations by reaching the final. After the pair met in the opening Group B fixture, a 1-1 draw, Kárpátalja topped the group, in part thanks to a surprise 2-0 victory over 2016 WFC winners Abkhazia. They later found themselves in a semi-final battle of the Hungarian diasporas, where they resisted a Székely Land fight back to win 4-2. Remarkably, Kárpátalja might very easily not have participated in the tournament; their invitation only came after fellow Hungarians Felvidek withdrew.

Northern Cyprus finished as runners-up in Group B, but showed their true ability with an 8-0 mauling of official tournament hosts Barawa in the last eight. Despite this, Mustafa Boratas’ side entered their semi-final as underdogs, as they faced overwhelming tournament favourites Padania. Striker Billy Mehmet broke the shackles of this underdog status, inspiring a 3-2 come from behind victory.

In contrast to the finalists’ previous free-scoring form, the final (on the pitch anyway) was anything but a classic. After starting positively, attacking down the flanks and creating a few opportunities, Kárpátalja surrendered their assertiveness as their opponents began to impose themselves. In the second half, Northern Cyprus dominated the possession and chances but couldn’t find a way through. They would’ve taken a late lead with a looping header, if not for a miraculous intervention from Kárpátalja keeper Bela Csongor.

Mark Clattenburg blew the full-time whistle, and with the rules stipulating that no extra-time be played, the final was decided by penalties. The first four spot-kicks included two Kárpátalja conversions and two Northern Cyprus misses, before the second four produced the opposite. This left a sudden death situation in which Csongor seized the role of hero. Diving to his right, he pushed away the decisive spot-kick and wheeled away in celebration, whirling his shirt above his head as coaching staff and fans alike rushed to join the celebrations. Kárpátalja had done it.

But in truth, the tournament wasn’t about who was crowned champion. In a competition designed to celebrate the core values of football, so often forgotten in the money-driven world of FIFA, the final proved to be a microcosm of the tournament as a whole. On the pitch, despite the prize at stake, the players were respectful and professional, with no sign of play-acting or violent conduct.

In the stands, friendships were forged. Behind the goal, supporters of both Hungarian teams, Kárpátalja and Székely Land, were joined by other Hungarian nationals and Enfield locals, united in supporting the underdogs. Songs were sung in both Hungarian and English, smoke canisters and flares were shared out and a vocal support created by the diverse fan group.

On the other side of the pitch, London’s Turkish and Northern Cypriot communities came together to cheer on their fellow countrymen. Friends, families and strangers were united in defeat, in which they and the team were ever so gracious. The spirit of friendship and football was alive and well, not just in the final but from the first kick of the opening game.

Check out the CONIFA Hub

In the words of CONIFA President Per-Anders Blind: “FIFA tells you your identity, we ask you your identity.” This sentiment is no more apparent than in the wide range of struggles, stories and legacies of the tournament’s participants.

Take Tibet, for example; just making it to London was an achievement in itself. Representing the Tibetan people, those who still live in their Chinese-occupied homeland and those exiled across the globe, the team participated in their first international tournament. Despite threats from China and the withdrawal of major sponsors, CONIFA ensured that Tibet’s voice was heard. With spirited performances on the pitch and passionate and colourful support off it, Tibet raised awareness of their situation in London’s communities, but also nationwide through press coverage.

Many of the other participants have similar stories to Tibet. Abkhazia – region in western Georgia – and Northern Cyprus both yearn for varying degrees of autonomy. The United Koreans in Japan seek to end the institutionalised discrimination that they have suffered for generations, while the likes of Ellan Vannin, Cascadia and Székely Land want their cultural identities and heritage to have the recognition it deserves. Matabeleland and Panjab want their communities to recover from war and destruction, and hope that international representation can help this.

The participation of these teams leaves a legacy that anything is possible. Many of them have faced various hardships, but they have all chosen to respond with tolerance and friendship. The beauty of CONIFA’s brainchild is its legacy – everyone deserves representation, no matter their aim, cause or achievements.

But that’s just the tip of the iceberg. While 16 teams qualified for the 2018 World Football Cup, in total 47 teams are represented by CONIFA, and more are joining every year. That’s 31 other regions, de-facto nations and sport isolated territories that need their voice to be heard. This year’s tournament hasn’t just opened our eyes to the situations and stories of the 16 participants, but all the communities worldwide under the CONIFA umbrella.

From the Sami people represented by Sápmi (Lapland) to the Rohingya people in Myanmar, CONIFA is reminding us that there are millions of people, some even close to home, who are under-represented, oppressed and discriminated against.

The future looks bright for CONIFA, but they can’t afford to dwell on this year’s success. As is the case with any volunteer-run organisation, things will not always run smoothly. That was evident this tournament, as Ellan Vannin withdrew mid-competition in protest over a player-eligibility dispute.

In order to continue their good work CONIFA will need to grow. Blind admits himself that CONIFA has only just started its journey: “When CONIFA reaches financial stability, we would like to start a humanitarian foundation and create different projects to help and support people in need.”

So after 10 days of friendship, celebration and pure footballing entertainment, the 2018 CONIFA World Football Cup is over. Kárpátalja are worthy champions, but what this tournament has taught us is that football is about far more than winning. As clichéd as ‘It’s the taking part that counts’ is, never has that sentiment been more meaningful than it has been in London these past days.

CONIFA’s showpiece event has been a celebration of identity, diversity and empowerment, and has created an invaluable legacy. It has taught us that people from all walks of life can get along and learn from each other if we notice our similarities and not only our differences. In this instance, the similarity has been an untainted love for the world’s game. “I hope we’ve contributed to better understanding, respect and harmony in a diverse world,” Blind wrote in his programme notes. I don’t think anyone would disagree.