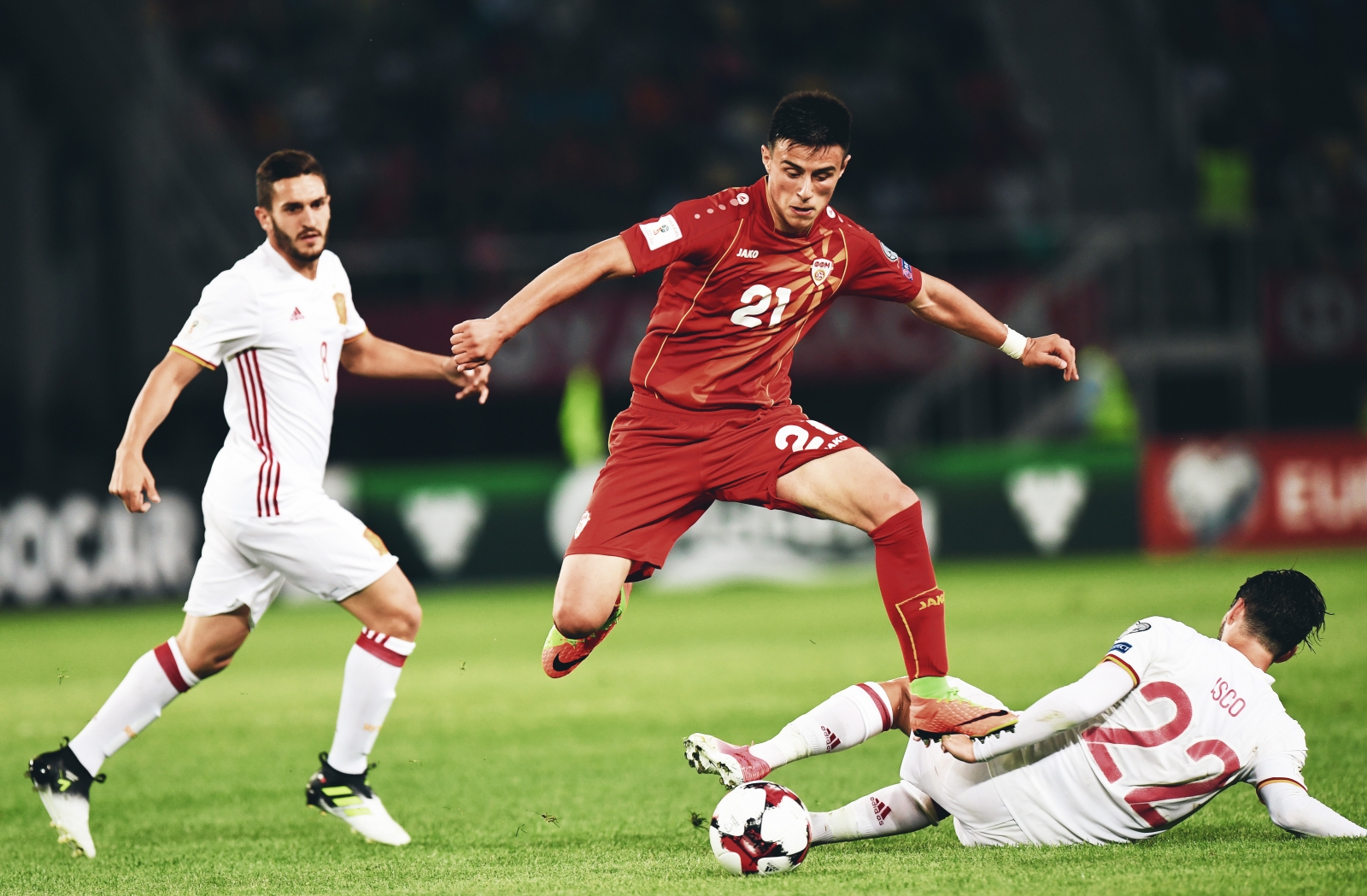 ‘A boy destined for greatness’ is a common statement in the football world, though not usually reserved for a youngster from Macedonia, a small country located in Eastern Europe with a modest football history, one big club in FC Vardar, and few players who have left their mark at the big European clubs.

You may have heard of Darko Pančev who won both the European Cup and the European Golden Boot with Red Star Belgrade in the early 1990s and Goran Pandev who won the Champions League with Internazionale in 2010 and is still playing professional football at the highest level with Genoa in Serie A. One player you probably haven’t heard of, though, is Elif Elmas.

Every country has its greatest football talent. Some of go on to become world-class players like Lionel Messi and Cristiano Ronaldo, while others failed to meet expectations and fade away, akin to the likes of Freddy Adu and, more recently, Hachim Mastour. Macedonia, however, has never even had a talent with the potential to become world class. Now, for the first time, that looks set to change.

An ordinary young boy from Skopje living in the most dangerous part of the city, working voluntarily in his father’s candy shop, Elmas started playing football at the age of six for his neighbourhood club Fenerbahçe Tefejuz. In a wonderful coincidence, 12 years later, the youngster from the capital made his debut for a club of the same name, only this time it was the giants of Istanbul. With a story to be told and a journey to be forged, Elif Elmas is quite the character.

Elmas started his career playing as a number 10 at a small, local club on old, soggy football pitches until he was spotted by one of the best academies in the country, FC Rabotnički. Unfortunately for the Macedonian club, they weren’t alone in the race for Elif’s talent. Even though he was just 11, he was being scouted far and wide, with Heerenveen of the Netherlands providing stiff competition for his signature.

Alongside the Dutch club were scouts from Catalonia who advised Espanyol and Barcelona about the best talents from the Balkans. Igor Angelovski, who was the first team manager of Rabotnički, was impressed with Elif and his dominant play from midfield, providing assists and scoring goals, and easily dominating youth tournaments in his district.

His vision, creativity and ability to muster chances in the final third sparked a fierce battle across the country. The Elmas family negotiated with Rabotnički and decided that it would be best for Elif to start playing football for one of the biggest clubs in Macedonia first. A club recognised for developing young players with a patient manager who is carefully nurturing future first teamers, Angelovski took Elmas under his wing and slowly established him as the key player of the first team, before leaving to take up the Macedonia national team post.

His success at home kept him in the limelight, particularly for Dutch side Heerenveen. They didn’t give up and invited him to a trial in the Netherlands. Elmas travelled north and played a few games in which he was the best player on the pitch, playing in an orthodox advanced central midfield role where he could break into the box and create from deep. The Dutch side were mesmerised by his natural flair and tried once again to sign him.

Elif, however, was only 15-years-old and couldn’t move to Heerenveen yet, so they negotiated a verbal agreement to sign him after his 18 birthday. It seemed like Elif’s future was decided, but playing for Rabotnički in the coming years shaped his career to a very different path, indeed.

At just 16 years and six days, in September 2015, Elmas made his debut for Rabotnički. Elif says he was so impressed with just the chance to sit on the bench that he entered the game with an extra shirt on, and that when Angeloski pointed to him in the latter stages of the second half, he looked around in disbelief, sure the manager was asking someone else to get ready.

In his debut season he played mostly in the final minutes of games, though he slowly worked his way into a more regular midfielder slot after the winter period. He showed glimpses of his quality during the minutes he played, but there was much more to come. He had an aura about him, something magical, an X-Factor that Macedonian football fans had rarely seen.

Elmas started the following season as a first team player and quickly became a vital cog in Angelovski’s side. It was a breakthrough season in which he showed all his qualities – his strong character, winning mentality and determination to work hard and become the best he can be. Rabotnički finished third in the Macedonian First Football League, but Elmas was the greater story. He played in 33 matches, scoring six goals and providing seven assists, making him one of the most valuable and decisive players in the league at only 17 years of age.

Over the course of the season, a number of scouts followed Elmas, with Manchester City now making their interest known alongside the likes of Internazionale, Galatasaray and Fenerbahçe.

Prior to last summer’s transfer window and the Under-21 European Championships in Poland, Elif’s life changed drastically. He was part of the Macedonian team which played in the qualifiers for the finals in Poland, securing the nation’s first appearance at a major football tournament ahead of an extremely talented France side that boasted Corentin Tolisso, Adrien Rabiot, Thomas Lemar and Moussa Dembélé.

Read  |  Yugoslavia in the 1990s: the wonder-team that never was

Elmas was the youngest member of the travelling party, but before the trip to Bydgoszcz, a dream came true. Angelovski called Elmas up to the senior national team for the World Cup qualifier against Spain in Skopje, and he played the second half against the likes of David De Gea, Sergio Ramos, Andrés Iniesta, Isco and David Silva. He impressed throughout, demonstrating a maturity to play against some of the world’s best in a deeper, creative role. Macedonia lost the game 2-1 but Elmas stole the headlines again, only this time in Spain as well as at home.

Elmas then travelled to Poland as a senior international and played in all the group stage matches despite being registered as one of the youngest players at the finals. Boasting a penchant for creating space and finding a quick, incisive pass, Elmas was a step ahead of many of his more experienced rivals throughout the finals, blending intelligence with exceptional technique – a recipe for success.

Returning from the summer a full international and one of the unheralded stars of the Euros, his contract at Rabotnički was due to expire and he was free to negotiate with a new club. There was interest from over 20 clubs across the globe, including some of Europe’s true goliaths, but in the end, Elmas and his family made a smart decision regarding his next move. Heerenveen thought they had him after they agreed a pre-contract in 2015, but now a better option was on the table, a club offering him a place in the first team and a chance to shine in Europe.

That club was Fenerbahce. Smartly, they used a player from their basketball team, a Macedonian legend in Pero Antić, to persuade Elmas to sign for the Turkish club. Elif duly signed a five-year contract in Istanbul as Fenerbahce fought off stiff competition to sign one of the lesser-known but brightest stars in Europe.

The Turkish giants and their head coach, Aykut Kocaman, now have a player with the work ethic, talent and desire to become one of Europe’s best. With the versatility to play anywhere in midfield and across the front line, he’ll initially be used sparingly at Fenerbahce, playing when and where opportunities become available, but expect to see him shine in a number 8 or 10 role as he settles in at the Şükrü Saracoğlu Stadium.

While Elif Elmas may never scale the same peaks as Messi or Ronaldo, he represents the most promising talent to emerge from Macedonia in decades, perhaps ever. Now, with a solid education at Fenerbahce underway, a nation holds its breath to see what their golden boy can deliver in the years to come.