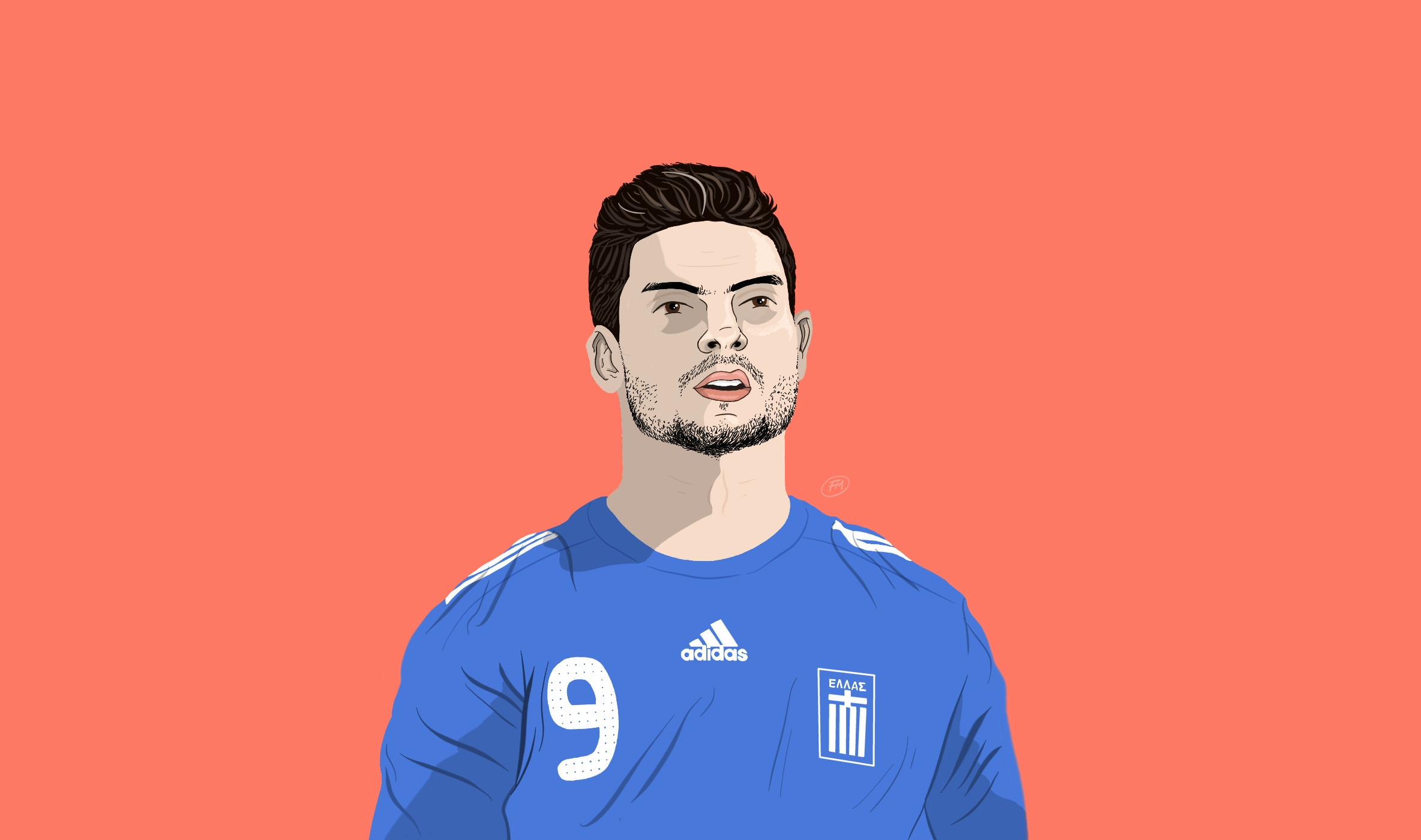 The football world remembers Greece for its stubbornness and industry in Euro 2004. The shrewd, workmanlike effort to shut the game down, preserve a lead, bleed the clock, and perfect what is now known as ‘anti-football’ was remarkable – even if some considered it ugly. One stalwart of Greek football – and there are many – is Angelos Charisteas, a towering striker whose goal against Portugal in Euro 2004 is frozen in Greek footballing mythology as the greatest triumph of the nation.

The game Charisteas played, both in style and approach, was a hybrid of sorts. He played club football in Greece, Holland, France, Germany and Saudi Arabia over a career span of 16 years, and outside of Greek football circles, Charisteas is remembered primarily for his direct play as a target man. His proclivity to operate between two centre-backs, to hunt down a hopeful long ball and hold it up while his teammates could reconnect the midfield with the attacking line he led, remains the standard of textbook striker play.

From his first club Aris in the ancient port city of Thessaloniki, Charisteas began a journey that would take him far beyond Greek shores into a world reserved for the bold. Following successful loan spells and European competition, Werder Bremen scouted the striker and secured his services. His time in the Bundesliga was a success as he scored with regularity given the rise of the German game between 2002 and 2005, and the talent on display in the league. The man holds a Bundesliga winners medal and a DFB-Pokal winners medal, too.

His next move was to Dutch powerhouse Ajax where he was set to replace the irreplaceable Juventus-bound Zlatan Ibrahimović. In a somewhat pernicious twist of fate for the Greek, it was never going to fully work out for a six foot three inch striker best deployed in a 4-4-2 at a club that always plays a 4-3-3. Even so, he took home the Dutch Cup and the Dutch Super Cup with Ajax.

A subsequent move to rivals Feyenoord for a season helped give him first team football before a move back to Germany with Nürnberg, and a loan to Bayer Leverkusen with whom he reached the final of the DFB-Pokal. Charisteas’ nomadic career eventually took him to France with the now-dissolved club Arles-Avignon before a brief return to Germany with Schalke where he won another DFB-Pokal. Spells in both his native Greece and in Saudi Arabia add to the allure of adventure Charisteas enjoyed in club football.

But the real magic and the iconic status he reached is reserved for his contributions to the Greek national side at Euro 2004. Greece had been a frustrating team to watch for the football purists at a tournament that had a young Cristiano Ronaldo and Wayne Rooney in flying form and was the curtain call for a generation of greats. The neutrals embraced the Greeks with their simple approach. The blue of their basic Adidas kit was matched only by the blue-collar shift the team put in over and over during the tournament orchestrated by German coach Otto Rehhagel. It was odd to see a side of underdogs with tucked in shirts, black boots, and a dogged game plan find themselves in the final against a Portugal side that had members of its famed golden generation and some up and coming stars at its disposal wearing gold-painted boots to match the flair of their egos and game.

If ever there was a moment that put Greek football and Angelos Charisteas on the map, it was that corner. As the silver Adidas Fevernova ball is whipped in near post, the towering Charisteas wedges between Ricardo Carvalho and the goalkeeper, Ricardo. His header is Zeus-like, thunderous and direct to the middle of the net and the hearts of the Portuguese team. Against all odds, the Greeks are up in the final where they have one shot on target from their one corner kick to score the one goal that would win the game and change the way the world regarded Greek football.

Angelos Charisteas was not a magician. He was not a mercurial talent tormenting defenders in their sleep. Charisteas was the embodiment of a proud footballing nation, whose uniform approach in the biggest tournament outside of the World Cup turned what the masses saw as bruisers into European champions. Reflecting on the priceless moment, Charisteas said it perfectly: “Even in 50 years’ time, everybody will remember that I scored the goal which made Greece the champions of Europe. We wrote history and my life changed completely at that point.”