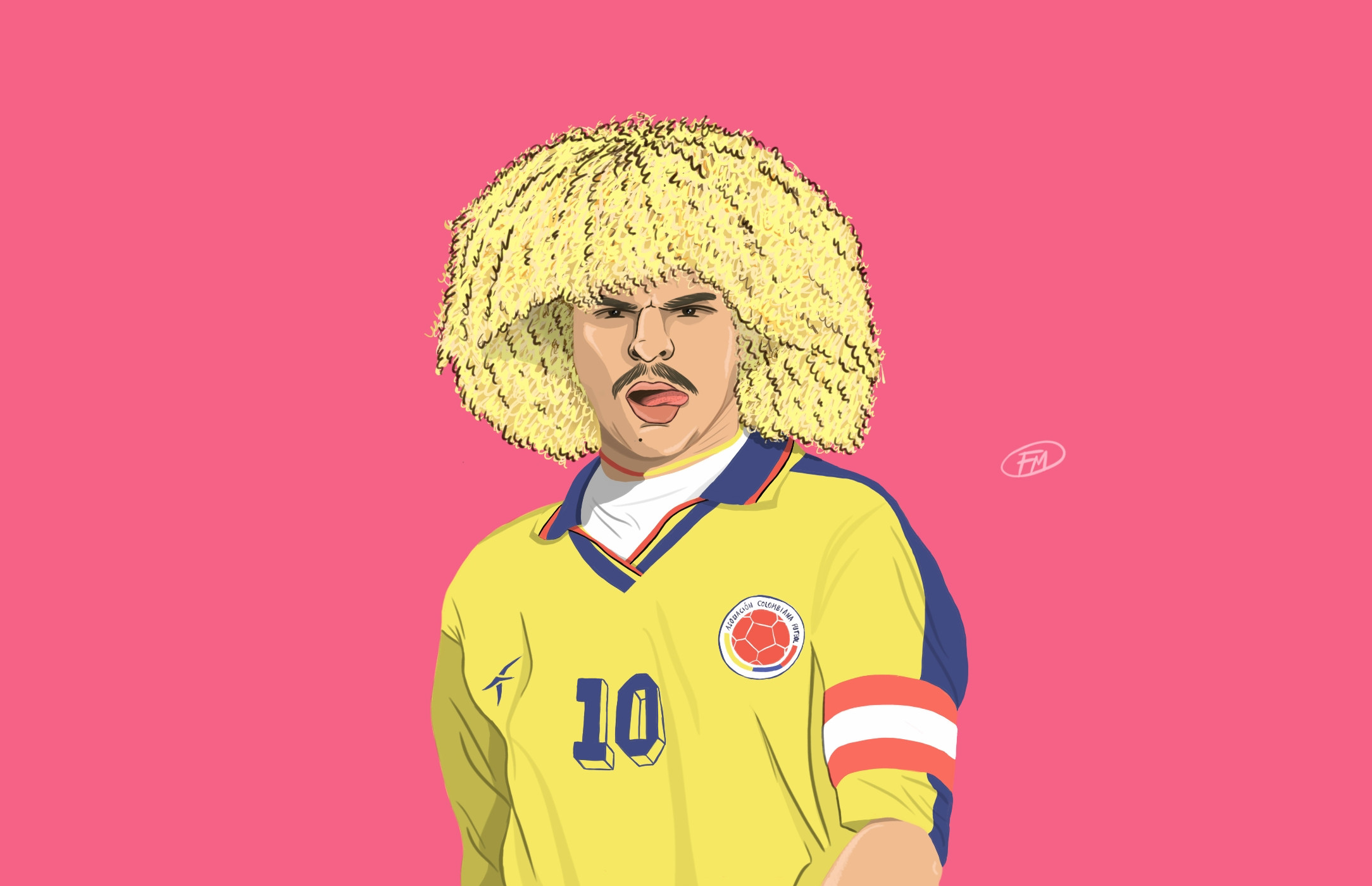 Watching Carlos Valderrama in slow motion provides quite the spectacle. His trademark hair bestows a bounce of almost seductive quality, perhaps only equal to that of a particularly risqué Baywatch episode. Arms – adorned with his trademark collection of beads and bangles – fly upwards, shielding the ball in Gascoigne-esque fashion, mind and body poised for deceptive excellence.

When it came to the interaction between man and ball, Valderrama made it simple. Despite an appearance which screamed ‘virtuoso solo’, he was a magnificent footballer for his selflessness and rhythmic simplicity. A short but deceptively effective one-touch pass, a momentary pause in possession till the opportunity revealed itself, or a seemingly impossible twist to elude opponents – his was an exuberant and eclectic, yet unpretentious, repertoire.

Santa Marta, broiling on Colombia’s Caribbean coast, is both a rustic beach town and a busy port; simultaneously a haven for backpackers, yet raw and heaving its way to productivity. As Valderrama’s hometown, it goes some way to explaining his penchant for a colourful appearance coupled with a no-fuss approach.

Valderrama’s father was a professional footballer, and Carlos first played football on Santa Marta’s dusty streets. In the absence of structured youth football, or luxuries such as grass pitches and referees, he learnt the art of balance, how to be calm, survive, and play his way out of trouble – life lessons which would serve his playing style throughout a 20-year professional career.

A local club, Unión Magdalena, spotted Valderrama in 1981 and signed the 19-year-old to his first professional contract. Quietly impressive, Valderrama stayed for four years and earned a move to Bogotá-based Millonarios in 1984. Yet in the frigid mountain air, shrouded by the serious demeanour of the capital city, he only stuck around for a solitary season.

His true breakthrough came in 1985. Despite the geography, Cali, the spiritual home of Colombian salsa, proved a closer cultural match for Valderrama. By now 24, his first international cap coincided with becoming a key component for Cali.

International prominence quickly followed his debut. Installed as Colombia’s captain for the 1987 Copa América, Valderrama shone as Colombia impressed. In a 1988 friendly, an enigmatic and commanding display against Bobby Robson’s England saw Europe take note, too.

Bewitched, Montpellier President Louis Nicollin, signed Valderrama soon after his Wembley masterclass. In a team built around a youthful Laurent Blanc and effervescent Roger Milla, Valderrama took time to adjust to the European game. However, the signing of a 23-year-old Eric Cantona appeared to both settle and spur Valderrama on. 1989/90 culminated with the French Cup, Valderrama’s first Montpellier’s second ever piece of silverware, and Italia 90 on the horizon.

Colombia’s first World Cup appearance in 28 years squeezed quite the highlights reel into four matches. Valderrama scored in the opening group game, a 2-0 victory against the United Arab Emirates, but defeat to Yugoslavia followed, and Colombia required a point against West Germany to qualify.

On 19 June 1990, Milan’s iconic San Siro hosted a fascinating clash of contrasts; order versus chaos, attack versus defence, and Lothar Matthäus versus Valderrama. Colombia eventually earned the necessary point, mostly due to the relentless grace, poise,and rhythm of Valderrama. After laying on several chances for his teammates, and conceding a potentially heart-wrenching 88th-minute goal, Valderrama remained composed and provided the assist for Freddy Rincón’s 93rd-minute equaliser.

René Higuita’s calamity ended the adventure soon after, but Colombia and Valderrama had won hearts and minds alike. Despite starring in their famous 1993 5-0 demolition of Argentina and appearing in two further World Cups, that evening at the San Siro remains Valderrama’s international masterclass. His final cap came against England at France 98, by which time he was a 37-year-old veteran. Championships ensued as he returned to his Caribbean roots with Atlético Junior, and a successful Major League Soccer career brought the curtain down.

Valderrama’s poise, balance and sanguine creativity sometimes juxtaposed the Colombian psyche. He looked like a visual definition of flair, yet played with metronomic reliability – by his own admission, mostly thanks to growing up playing football on Santa Marta’s streets. Upon entering Valderrama’s hometown by road, a sign depicts, ‘Welcome to Santa Marta: here you can have it all’. As a midfield general and humble footballer, Carlos Valderrama just about did